Maria Alyokhina of the Feminist Punk collective Pussy Riot has announced a new play based on her Russian prison ordeal. The immersive theatrical piece titled  “Inside Pussy Riot,” will take place at the Saatchi Gallery for a six-week run in London. The play includes an interactive set in where the audience live through the rockers’ experience. She is collaborating with London theater company Les Enfants Terribles.

The immersive experience highlights right-wing misogynist tendencies” around the world

Tolokonnikova said she developed the piece out of fear that more people will be targeted for their political views amid a rise of “authoritarian and right-wing misogynist tendencies” around the world — in which she includes the election of US President Donald Trump. “It was really important to communicate to people that’s what happened to us can happen with anybody. We wanted to show people in their own skin what it means to be a prisoner.”

In 2012 Maria Alyokhina and Tolokonnikova were jailed for staging a protest titled  “A punk prayer” against Putin in a cathedral close to the Kremlin.The protest lasted less than a minute. The pair were imprisoned for nearly two years on a conviction for hooliganism. Serving in a former Soviet-era gulag, Tolokonnikova protested prison conditions by going on a nine-day hunger strike, requiring medical intervention.

“I did understand when I was in prison that I am more privileged in a way, because I have the opportunity to tell what’s going on there. So now I’m trying to keep doing this work,” Tolokonnikova said.

Pussy Riot has gained popular support internationally and in their native Russia after hosting a protest in Red Square, but many Russians thought the protest in a Moscow cathedral was a step too far. “We were aware and prepared for how it would be seen,” said Seraphima. “But there can be no compromise – it is our way of following the things we believe in.”

Tolokonnikova announced a Kickstarter campaign to raise funds to support the production, which she said would feature new Pussy Riot songs and videos and use actors to recreate the band’s odyssey. 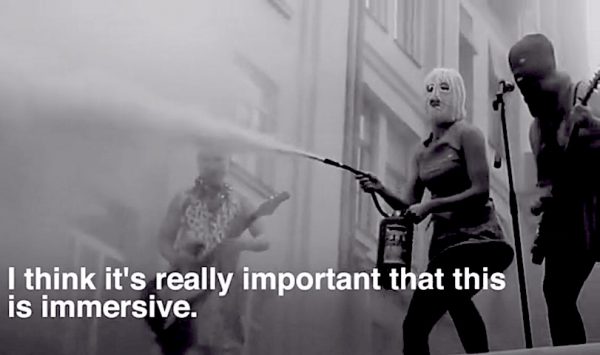