Rachel Whiteread the Turner Prize winning sculptor is returning to the university where she learned her craft to create an artwork that will be a centrepiece of UCL’s new multi-million pound student centre. Whiteread, an alumna of the UCL Slade School of Fine Art and the first woman to be awarded the Turner Prize in 1993, won a competitive commission to sculpt an artwork that will sit in the new student centre, a light-filled study and social space in the heart of UCL’s Bloomsbury campus that will be accessible to the public.

Often recognised as a member of the formative Young British Artists group, her career has spanned three decades since she graduated from the Slade with an MA in sculpture in 1987. Since then, she has become a leading figure in UK contemporary art, confirmed last year by a major retrospective at the Tate. Her sculpture is one of two artworks commissioned for UCL’s New Student Centre. Jon Thomson, a Professor of Fine Art at UCL Slade, and Alison Craighead, an artist and lecturer at Goldsmiths, will create a digital artwork that captures the essence of UCL as a global university with its multi-national and multicultural student and staff population.

The New Student Centre, due to open in 2019, is set to be a stunning building, with transparent open spaces bathed in sunlight reflected off floors and walls made of exposed concrete, white oak, bronze anodised aluminium and York stone. It will act as a portal into UCL’s Bloomsbury’s campus, provide 1,000 new “study seats” and double up as a new venue for university events.

Sam Wilkinson, UCL’s Public Art Manager, said: “We are absolutely delighted and it is perfectly fitting that Rachel, a former student of the Slade, will create an artwork for what will be a central meeting point for student life and activities.”

Whiteread began a masters in sculpture at the Slade in 1985 after graduating with a BA in painting from the Faculty of Arts and Architecture in Brighton. She spoke fondly of her time at the School and how important it was to her artistic development in exploring space and form. 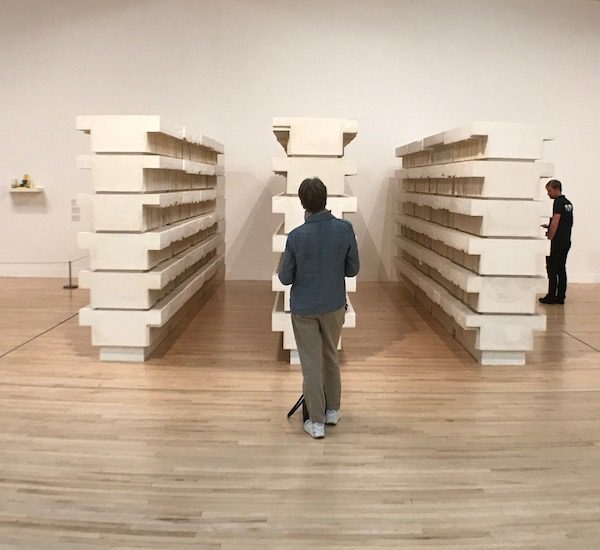 Whiteread said: “My time at the Slade was enormously important in my development as an artist. Access to other departments and being affiliated with an ambitious university was inspiring. It is consequently a great honour to be part of UCL’s permanent art collection, and I hope I can inspire future generations.”

Susan Collins, Slade Professor and Director of the Slade School of Fine Art, said she was delighted to have such exceptional artists who had close links with the Slade: “Both Whiteread and Thomson and Craighead’s approach has been to be responsive to both the site itself as well as the often complex context today’s students find themselves in. Relevant, exciting and contemporary, these commissions will contribute greatly to the culture and fabric of UCL and UCL’s student experience for decades to come.”

Dealing with negative space, Whiteread’s works interrogate the imprints and impressions left by objects and structures. For her Turner-prize-winning House (1993-1994), she cast in concrete an entire three-storey house in East London. Her works before and since have similarly sought to canvass or articulate negative space: under chairs, inside water bottles and air mattresses or the imprint left in air by a library.

Whiteread’s work has taken a particular look at London and the politics of urbanisation, development, and life in the city. Her Room 101, for example, is the cast of a room at the BBC’s Broadcasting House in London, a room said to have inspired the torture chamber in George Orwell’s 1984.

The UCL sculpture which will be paid for from UCL’s donor campaign is the latest public art project for which Whiteread has been commissioned. These have included the Judenplatz Holocaust Memorial in Vienna, a sculpture in resin for the empty fourth plinth in London’s Trafalgar square, and a site-specific work for the new US Embassy in London.

Thomson and Craighead are specialists in the creation of art that responds to, or engages with, new technologies. Aside from creating a work that contributes to the public environment, the commission will also explore the contribution that students make to life at UCL and to London.

“It’s a global university. The way in which the university here is connected to the rest of the world is something that interests us – as well as being able to visualise it. Because of social media and because of the web, your “next door” isn’t necessarily your neighbour, your “next door” can be somewhere in Africa.

“The way in which your geography operates when you are using a smart phone is completely different to when you are physically present somewhere, but they co-exist simultaneously. We want to make something that reflects on how this is present at UCL.”

Thomson and Craighead, who have been working together as a collaborative duo for more than 20 years, produce works that examine the changing socio-political structures of the Information Age. Their recent work looks at live networks and how they are changing our understanding of the world.

They intend to have an extensive period of consultation with students as part of the creation of the work. ‘What I’m really excited about is actually spending time talking to students, and meeting them. We’re going to be having a chat about how they’re imagining the New Student Centre is going to work and what they want from it. I think it’s going to be great,’ said Craighead.

Both artists emphasise that the artwork should contribute to the public environment that the building will boast as a ground floor walkway that people can use to get round Bloomsbury. The space is intended to be inclusive, connecting up different parts of London.

“UCL is rare in that it has quite a lot of public space. You actually have walkways through the institution for the public. Some other institutions have that nominally, but UCL actually has public space flow. I commend UCL for maintaining that,” said Thomson.

Wilkinson said: “I do believe there’s a genuine desire at UCL to make this campus part of London, rather than turning its back on anybody, or being inaccessible. That’s what these commissions are doing, and what UCL is trying to do.”

The New Student Centre will be home not only to 1,000 new extra study spaces but also student enquiry services, IT clusters, a roof terrace, and a publicly accessible Japanese Garden. UCL students will be able to access the upper and lower levels of the building using swipe-access, with the ground-floor of the building intended to serve as a thoroughfare for the public and students.

The New Student Centre at UCL is intended to be completed in December 2018. Thomson and Craighead will work in collaboration with the building’s architects Nicholas Hare Architects and representatives from UCL.