An important portrait by Francis Bacon of his friend/rival Lucian Freud is to be shown in Tate Britain’s landmark exhibition All Too Human in February 2018. The work was only seen in public shortly after it was completed – firstly in London in 1964 and then in Hamburg and Stockholm in 1965. It has since remained in private hands and has not been exhibited for over half a century.

Bacon and Freud had a deep and complex friendship and were often viewed as artistic rivals. They first met in the mid-1940s and were inseparable for years, seeing each other almost daily in Soho’s bars and clubs as well as visiting each other’s studios and occasionally sitting for portraits. The portrait that will be shown at Tate Britain next year is an angst-ridden image of the human figure, bare-chested and curled into the corner of a dark room beneath a single lightbulb. The painting stood over six feet high and was originally part of a triptych which Bacon then split into separate works. It was first unveiled in 1964 at the group exhibition Aspects of XX Century Art held at Bacon’s gallery Marlborough Fine Art. It then travelled from the Kunstverein Hamburg to the Moderna Museet in Stockholm over the following year as part of a solo show of Bacon’s work but has not been seen in public since. 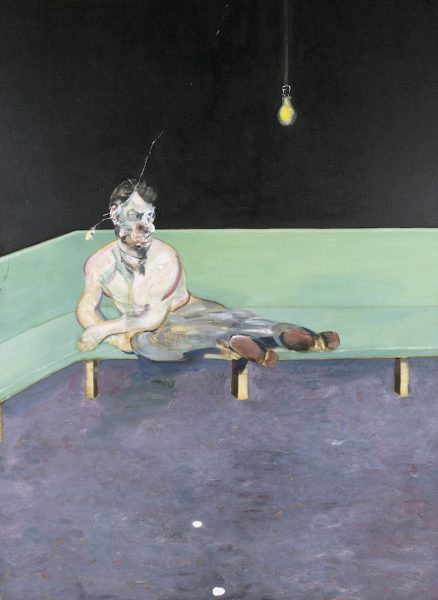 The work will be one of several key Bacon paintings on loan to Tate Britain for the exhibition All Too Human. These will include an important portrait of Bacon’s lover Peter Lacy made in 1962, the year of Lacey’s death, and not seen in the UK since. It shows him seated with a scowling expression and is the first time Bacon portrayed the nude body with its internal organs on display, seemingly bursting through the surface of its skin. An extraordinary Bacon triptych from 1974-77, on loan from a private collection, will also be exhibited for the first time in a UK public gallery in over 30 years. A final homage to George Dyer, the great love of Bacon’s life, it shows a contorted body beneath a black umbrella on a cold stretch of beach.

Alex Farquharson, Director, Tate Britain said: ‘This will be an unmissable opportunity to see some truly extraordinary paintings, many of which have not been seen for decades. With this exhibition, we want to show how British figurative painters found new and powerful ways to capture life on canvas throughout the 20th century, and Bacon’s portraits are some of the greatest examples of that endeavour.’

All Too Human: Bacon, Freud and Century of Painting Life will be at Tate Britain from 28 February to 27 August 2018. This major exhibition will celebrate how artists have captured the intense experience of life in paint, portraying personal and immediate experiences. Much loved and rarely seen works will be included, from Walter Sickert and Stanley Spencer to Frank Auerbach, R.B. Kitaj and Leon Kossoff, through to Paula Rego, Jenny Saville and much more. It will be curated at Tate Britain by Elena Crippa, Curator of Modern and Contemporary British Art, and Laura Castagnini, Assistant Curator, and will tour to the Museum of Fine Arts, Budapest

All Too Human: Bacon, Freud and Century of Painting Life will be at Tate Britain from 28 February to 27 August 2018