Through drawing, painting, photography, printmaking, sculpture and video works, Sink Without Trace offers alternative perspectives on a subject that is often only presented through the eyes of the media and politicians.The exhibition includes objects and materials collected from shipwrecked migrant boats in Sicily, anonymous drawings made on migrant boats and works created by unaccompanied minors in transit camps in Calais. Sink Without Trace also includes photographic documentation of the forensics project relating to the victims of the migrant boat currently on display at the Venice Biennale. 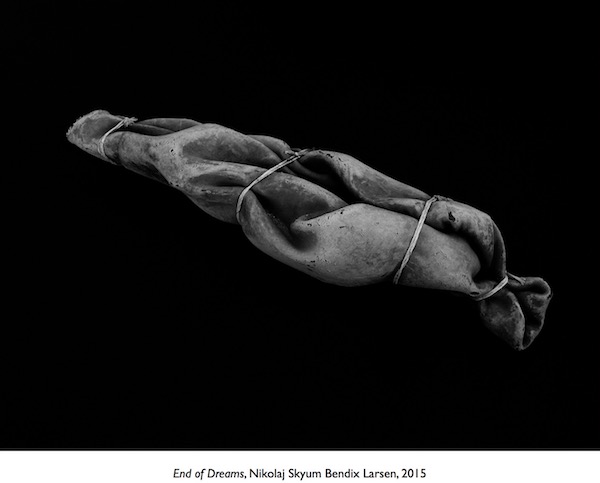 A rescued North African migrant boat will be on public display close to the gallery on Regent’s Canal, Kings Cross during Refugee Week (17- 23 June). For her project TO6411(2013) Lucy Wood set sail on a 4000-mile solo voyage in a North African migrant boat from Lampedusa, arriving in London nearly four months later.  Wood travelled with the objects that had been abandoned by the migrants on the boat and other found objects that she had collected.

Behjat Omer Abdulla is a Kurdish mixed media artist based in Sweden, working with drawing, photography and video installation. From a Distance (2016) are a series of graphite drawings depicting a tragic story that the artist heard while spending time with the residents of a refugee camp.

The South African and British artists Broomberg & Chanerin will present a 12-minute film, The Bureaucracy of Angels (2017), which records the demolition of 100 migrant boats in Sicily during the winter of 2016 and rescue missions by Migrant Offshore Aid Station (MOAS) off the coast of Libya. The Bureaucracy of Angels was commissioned for Art on the Underground, Transport for London’s public art programme.

Victoria Burgher a British multi-disciplinary artist whose work ranges from sculptural installations and site-specific interventions to collaborative public ventures. Surviving (2019) is an installation of hundreds of fragments of a foil survival blanket cast in ceramic and laminated with gold leaf.

Max Hirzel is an Italian photojournalist based in Italy. In 2015 he began a long term project entitled Migrant Bodies, which documents an extraordinary story of forensic attempts to trace the victims from the tragic shipwreck known as ‘the boat of innocents’, in which more than 800 lives were lost on April 18, 2015, in the Mediterranean. The boat is currently on display at the Venice Biennale.

Mariwan Jalal is a Kurdish mixed media artist based in the UK who makes print, painting, photography, ceramic and installation works. Jalal will be showing Faces of Sea (2016) a series of screen prints and ceramics based on his journey by sea.

Tamara Kametani is a Slovakian artist based in the UK who makes installation, video and photography works based on issues around migration and migrant deaths at sea. Half a Mile from Lampedusa (2017) is a cyanotype of underwater video footage shot by the Italian navy to record the scene of the October 3, 2013, shipwreck in the Mediterranean. The cyanotype will continue to fade throughout the duration of the exhibition, symbolising our memories of these events.

Nikolaj Bendix Skyum Larsen is a Danish artist based in Paris. Larsen will show photographic works from his installation End of Dreams (2015), a tribute to the thousands of migrants who die in the Mediterranean while trying to come to Eu- rope. He will also show his recent film Quicksand (2017), a dystopian reverse scenario of Europeans being forced to escape and rely on smugglers to cross the sea.

Gil Mualem-Doron is an Israeli artist based in the UK. Eucharist (2016) are a series of porcelain plates printed with digital collage referring to the plight of refugees in the Mediterranean and the UK’s colonial past.The plates are presented on reclaimed wood found on Dover’s coastline and highlight how migrant’s bodies can reappear through the food chain onto our plates.

Forensic Oceanography will present ‘The Left-to-die boat’ case, in which 63 migrants died while drifting in a boat for 14 days in a NATO surveillance area. The left-to-die boat (2014) uses surveillance footage and interviews with one of the survivors to create a video analysis of events. Forensic Oceanography is part of Forensic Architecture, who were shortlisted for the Turner Prize in 2018.

 Maya Ramsay is an artist based in the UK who will be presenting works from her Arts Council England funded project Countless (2016-18) working with migrant’s graves and shipwrecked migrant boats. Ramsay will also be exhibiting a short film Leave or Remain | Taraka aw Baqqa |made on a shipwrecked migrant boat and found objects from ‘boat graveyards’.

Mario Rossi is an artist based in the UK. Rossi will present Annex: IMO circular 11 (2012) from his series of paintings of the sea made over print outs from the International Maritime Organisation’s reports detailing ‘unsafe practices associated with the trafficking or transport of migrants by sea’.

Shorsh Saleh is a mixed media Kurdish artist, carpet designer and weaver based in the UK. His works focus on the subject of migration, borders and identity. Saleh will present miniature paintings, employing traditional techniques in a contemporary context, to express his experiences of living in a conflict zone and the journeys that refugees make.

Aida Silverstri is an Eritrean-Italian artist based in the UK. Silverstri’s photographic project Even this will pass (2013-14) depicts the journeys of Eritrean refugees from their homeland to the UK. Her series of blurred portraits are inscribed with the journey that each sitter took to reach the UK, alongside a text detailing the sitter’s account of the journey.

Art Refuge UK is a charity offering specialist Art and art therapy spaces to people who have been displaced due to war, persecution and poverty. They have been working in Calais since 2015 with refugees living in transit on the France-UK border, with a particular focus on unaccompanied young people. Art Refuge UK will present images of works during Refugee Week made by unaccompanied teenagers from Syria and Eritrea.

Nathaniel White is a British artist based in the UK. His work Routes (2017) uses data from the International Organisation for Migration to create a photographic record of the sites where migrants died in the Mediterranean between January 2014 and November 2018. Each image presented during Refugee Week represents an individual’s death.

Lucy Wood is a British artist based in the UK. Alongside, her refugee week boat project TO6411 (2013) located on Regent’s Canal, Wood will also be showing sculpture and wall-based works in the gallery.

Dagmawi Yimer is an Ethiopian migrant who settled in Italy and co-founded AMM, which produces written and audio-visual narratives made by migrants about their experiences, enabling them to participate directly in the dissemination of their own stories and testimonies.Yimer’s seventeen-minute animation film ASMAT – Names in memory of all sea victims (2013) is a poignant and hypnotic tribute to the 368 lives lost at sea off the coast of Lampedusa on October 3 2013.

Proceeds from the exhibition will go to Alarm Phone, a telephone hotline for migrants in distress at sea.

Federica Mazzara is Senior Lecturer in Intercultural Communication at the University of Westminster. Her book Reframing Migration: Lampedusa, Border Spectacle and Aesthetics of Subversion was published by Peter Lang in 2019.

Maya Ramsay (www.mayaramsay.co.uk) is an award-winning artist. Her article on Art and migrant deaths at sea Reframing the Debate: the Art of Lampedusa was published in ‘Crossings: Journal of Migration & Culture’ in 2016.