Purdue University engineers have created the whitest paint yet. Coating buildings with this paint may one day cool them off enough to reduce the need for air conditioning, the researchers say.

The researchers believe that this white may be the closest equivalent of the blackest black, “Vantablack,” which absorbs up to 99.9% of visible light. This was the controversial pigment that artist Anish Kapoor exclusively copyrighted in 2016. The new whitest paint formulation reflects up to 98.1% of sunlight – compared with the 95.5% of sunlight reflected by the researchers’ previous ultra-white paint – and sends infrared heat away from a surface at the same time.

In an effort to curb global warming, the team created an ultra-white paint that pushed limits on how white paint can be. Now they’ve outdone that. The newer paint not only is whiter but also can keep surfaces cooler than the formulation that the researchers had previously demonstrated.

“If you were to use this paint to cover a roof area of about 1,000 square feet, we estimate that you could get a cooling power of 10 kilowatts. That’s more powerful than the central air conditioners used by most houses,” said Xiulin Ruan, a Purdue professor of mechanical engineering.

An infrared camera shows how a sample of the whitest white paint (the dark purple square in the middle) actually cools the board below ambient temperature, something that not even commercial “heat rejecting” paints do. (Purdue University/Joseph Peoples)

Typical commercial white paint gets warmer rather than cooler. Paints on the market that are designed to reject heat reflect only 80%-90% of sunlight and can’t make surfaces cooler than their surroundings.

The team’s research paper showing how the paint works publishes Thursday (April 15) as the cover of the journal ACS Applied Materials & Interfaces.

What makes the whitest paint so white? Two features give the paint its extreme whiteness. One is the paint’s very high concentration of a chemical compound called barium sulfate, which is also used to make photo paper and cosmetics white. 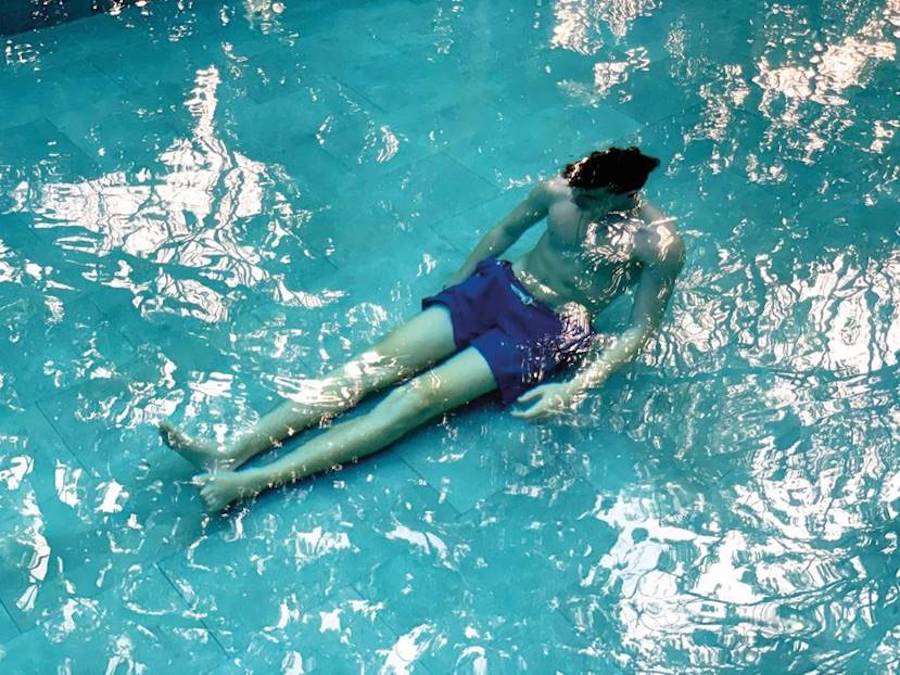 Pirelli HangarBicocca has announced a solo show by Maurizio Cattelan from 15 July 2021 to 20 February 2022. Specially conceived for the spaces of the Milanese institution, the exhibition symbolically represents the cycle of life and gives the audience an insight into collective and personal history, always poised between hope and failure, matter and spirit, truth and fiction.

Over the coming months, Pirelli HangarBicocca will continue with its exhibition program with the opening of “Breath Ghosts Blind” by Maurizio Cattelan, one of the best known Italian artist in the contemporary art scene, which will run from 15 July 2021 to 20 February 2022 (with a press presentation on 13 July). The museum space is at present closed and will re-open to the public as soon the Covid-19 regulations permit.

Curated by Roberta Tenconi and Vicente Todolí, the solo show by Maurizio Cattelan brings together a revised configuration of an historical work with new artworks for the first time presented in the spaces of the Navate area in Pirelli HangarBicocca, transforming them into a monument beyond time.

“Breath Ghosts Blind” unfolds in a series of acts dealing with existential concepts and issues such as the fragility of life, memory, the individual and collective sense of loss. Amongst symbolic references and images that belong to our collective imagery, the unique site-specific project challenges the current system of values.

Through his practice and over his thirty-year long career, Maurizio Cattelan (b. Padua, 1960) has staged actions that are often considered provocative and irreverent. His works highlight the paradoxes of society and reflect on political and cultural scenarios with great depth and insight. By using iconic images and a caustic visual language, his works spark heated public debate fostering a sense of collective participation. Conceiving artworks inspired by images that draw on historical events, figures or symbols of contemporary society—sometimes recalled even in its most disturbing and traumatizing sides—the artist invites the viewer to change perspective and to acknowledge the complexity and ambiguity of reality.

The exhibition “Breath Ghosts Blind” is the culmination of a project the artist has been working on for a long time and it celebrates his return to Milan after more than ten years. Taking place in the city that has already been home to several of his most significant interventions—from Untitled (2004), the debated installation in Piazza XXIV Maggio, to the monumental public sculpture L.O.V.E (2010)—the show pursues Cattelan’s visionary reflections towards the most disorienting aspects of everyday life.

The artist was a finalist for the Guggenheim Hugo Boss Prize (2000), and received the Quadriennale Prize in Rome (2009), the Arnold-Bode Prize, Kassel (2005), an honorary degree in Sociology from the University of Trento (2004) and the honorary Professorship in sculpture from the Accademia di Belle Arti di Carrara (2018). 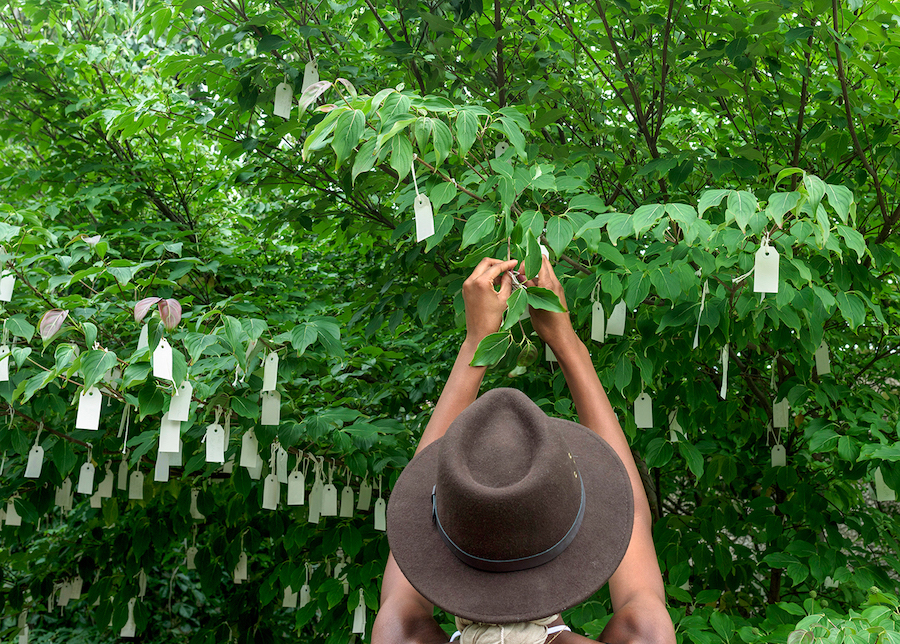 Inspired by Ono’s interactive artwork in the museum’s Sculpture Garden, people are invited to write their wish on a piece of paper, take a photograph of the handwritten wish and post it on Instagram tagging @hirshhorn, #WishTreeDC and #YokoOno. The Hirshhorn will display the virtual wishes from Instagram on its website throughout the two-week activation.

“Wish Tree for Washington, DC” was acquired by the Hirshhorn and installed in its Sculpture Garden in April 2007 as a gift from the artist. Each summer through Labor Day, visitors to the Sculpture Garden are invited to write a wish on a tag and tie it to the living dogwood tree’s branches. The tree ‘blooms’ with an assembly of the hopes and ambitions of global visitors. In cooler months, visitors are encouraged to whisper their wishes to the artwork’s branches. The Hirshhorn’s Sculpture Garden is currently open, and “Wish Tree for Washington, DC” will receive wishes virtually (and whispered) throughout April. Between April 15 and 30, museum staff will transfer as many virtual wishes as possible to paper tags and share updates on the Hirshhorn’s website and Instagram channel, @hirshhorn.

In accordance with the artist’s vision, the Hirshhorn will harvest all wishes and share them with her. The wishes will be buried at the base of “Imagine Peace Tower,” Ono’s installation on Videy Island near Reykjavík, Iceland, dedicated to the memory of her late husband, John Lennon. For approximately three decades, Ono’s global “Wish Tree” project has inspired more than 1 million wishes, including over 100,000 from the Hirshhorn.

“We are honored to partner with Yoko Ono to share her timeless message of peace,” said Hirshhorn Director Melissa Chiu. “The past year has challenged the Hirshhorn to translate the power of artworks including ‘Wish Tree for Washington, DC’ for online audiences. Our virtual exhibitions and artist talks have reached a global audience of more than 200,000 people in all 50 states and six continents. We’ll continue to invite global audiences to connect through modern art in meaningful ways until we can be together in person once again.”

The Hirshhorn will aggregate all the virtual wishes on a webpage that will also share an online tutorial aimed at children and caregivers making a ‘Wish Tree’ of their own at home.

Ono (American, born Tokyo, 1933) has been a prolific artist and notable figure in the art world since the 1960s. Throughout her career, she has created innovative forms of music, performance, poetry, experimental film and visual art. Her works are primarily intended to be transformative and experimental in nature and require participants to be realized. The “Wish Tree” series, begun in 1996, continues in this interactive tradition.