Christie’s has launched the inaugural 20th/21st Century: Shanghai to London sale series with staggering results. This pioneering cultural dialogue between two major international art hubs, live-streamed from Christie’s in Shanghai and London with incorporated salerooms in Hong Kong and New York proves you can sell from anywhere.

The sale series coincides with Christie’s new gallery opening at Shanghai’s Bund. It marks the first time an auction house has offered pre-1949 artworks in Mainland China. In the 20th/21st Century Evening Sale, Shanghai sold 86 per cent by lot and 93 per cent by value. The star of the sale was a Franz Marc 1913 masterpiece The Foxes, which sold for £42,654,500, more than triple the previous auction record for the artist.

‘The year 1913 is a key one for Franz Marc,’ said Keith Gill, head of Impressionist and Modern Art at Christie’s in London. ‘He is experimenting with a new dynamic visual language, inspired by Orphism and Futurism, which would become his leaping-off point into abstraction.’

Russia has bombed the Babyn Yar (Holocaust by Bullets) memorial in the Ukrainian capital of Kyiv. The site is devoted to the memory of the Babyn Yar massacre on September 29 and 30, 1941, when the Nazis executed Kiev’s entire Jewish population. More than 34 thousand Jews perished in one of the largest mass killings by the Nazis. President Volodymyr Zelensky tweeted, “To the world: what is the point of saying ‘never again’ for 80 years, if the world stays silent when a bomb drops on the same site of Babyn Yar?” “At least 5 killed. History repeating” 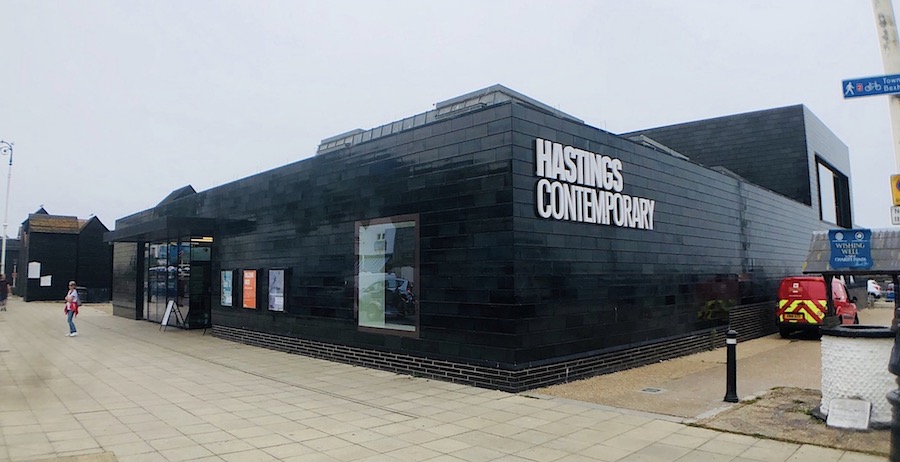 The Jerwood Foundation, a philanthropic charity devoted to promoting the arts in the UK, is offering to donate its award-winning art gallery building to Hastings Borough Council.

The building, now known as Hastings Contemporary, was opened as the Jerwood Gallery in 2012. The gallery was renamed seven years later when Jerwood stepped back from its management and local leadership took control.

The gallery, designed by HAT Projects, has won several architectural awards, including a RIBA National Award and a Civic Trust Award. It was built on the Stade in Hastings, the central position on the town’s seafront, at a cost of £5 million which was wholly funded by Jerwood. Now Jerwood has offered to gift the building to Hastings Borough Council for the benefit and well-being of the people of Hastings and East Sussex, as well as the gallery’s many visitors from outside the town and region.

Alan Grieve, Chairman of Jerwood, is and will remain proud of the impact the building has had in Hastings:

“Accessing art of high quality and importance should not be the unique preserve of the inhabitants of our capital and other cities. We believe it is crucial that projects like this bring amazing art to communities like Hastings to help not just with regeneration but also to inspire the talent that exists across our nation. We are proud of what’s been achieved in Hastings and, by giving this amazing building to the town’s people, for Jerwood in Hastings our dream and hopes would be fulfilled. We wish the town, Council and the gallery a very successful and culture-rich future.”

The gift is to be discussed at the council’s cabinet on 7th March, and then at a full council meeting on 13th April, with a recommendation that the council accepts the offer.

Council leader Cllr Kim Forward said : “The development of the Stade has been one of the most significant developments in Hastings in recent years, and the construction of the then Jerwood Gallery was pivotal in securing other investment to improve the whole site. We are very grateful indeed to the Jerwood Foundation for their most generous offer of the gallery, which will be discussed at our March cabinet meeting and then at full council in April. If agreed the gallery will continue to be run by its current management. We look forward to maintaining our successful partnership with them to ensure that the work started by the Jerwood Foundation can carry on.”

Deputy leader Cllr Paul Barnett, lead councillor for regeneration at Hastings Borough Council, added : “Hastings is currently one of the most attractive destinations in the UK for holidays and to relocate to. The cultural sector has driven this transformation of our image over the last ten years or more, and this wonderful building has been a key driver in this regeneration.”