Richard Nonas (January 3, 1936 – May 11, 2021), one of the most influential Post-Minimalist sculptors of his generation, has died, age 85. The news was confirmed by the artist’s gallery Fergus McCaffrey.

Nonas was an American anthropologist and sculptor. He lived and worked in New York City. Nonas’ sculpture practice addressed notions of space, place and deep time. His work from the 1970s involves experimentation with modes of presentation and material experimentation in which he used granite curbstones, linear wooden beams, and other raw materials. This work has been described as “talismanic objects” that create impressions of spiritual, emotional, and philosophical notions and meanings.

Nonas’ oeuvre is known for modular sculptural installations, primarily in stone or wood, in interior and exterior settings wrote that “we cannot grasp a Nonas’ sculpture simply by thinking about it. His works call for intuitive, empathetic responses.”

His work has been compared to that of Richard Serra, Joel Shapiro, and Dorothea Rockburne. His work has been exhibited internationally. He created a 300-foot-long installation in the U.S. at MassMoca in a one-person exhibition, Richard Nonas: The Man in the Empty Space. His work was featured in the 1973 Whitney Biennial. Courtney Fiske has written that Nonas treated “space as a material” in that each work is intended to be a “blunt insertion into the viewer’s surrounds. His approach to minimalism not only includes seriality but also maintain a sense of self-containment and timelessness.” Joyce Beckenstein writing for the magazine Sculpture described Nonas’ studio as a “Wunderkammer piled high with artefacts and relics as well as past and in-progress works….with the unexpected surprises of an archaeological dig.

Nonas stated that his travels impacted on his artistic practice, “What I realised in Mexico was that there are physical places, spaces deeply imbued with human meaning, that can have a great deal of power over us, places that affect us in an extremely worldly way.” He described his sculptures as ways to define his own “existent reality, the reality I try to describe to you”.

Victoria Pomery To Leave Turner Contemporary To Run The Box

Victoria Pomery is to step down as Director of Turner Contemporary. She will take on the role of Chief Executive Officer of the city’s newly opened £47milllion museum, gallery and archive, next Autumn.

After 19 years in post and the gallery’s first ten years of operation, Pomery oversaw the capital project, which delivered the recognisable David Chipperfield building on Margate seafront. She was awarded an OBE for her services to the arts in 2012 and an Honorary Doctorate from the University of Kent in 2020. She has led an internationally renowned programme of exhibitions and commissions, which have gained high profile press coverage, establishing a creative and exciting reputation for Turner Contemporary.

“I have been so lucky to work with so many incredible artists, organisations and individuals over the years. Having seen first-hand the impact that art can make on people and places, I am looking forward to taking the work at The Box forward at a critical and exciting time for the organisation. Turner Contemporary is a great institution and Margate is an extraordinary place. I feel privileged to have been part of its first incredible decade and look forward to seeing the gallery’s next phase of development.” – Victoria Pomery.

The Box, which initially opened in Autumn 2020, is becoming renowned for its engaging exhibition programme. The programme integrates the contemporary and the historical to bring the past to life through the present. It showcases international visual arts and media and Plymouth’s rich heritage through ambitious touring exhibitions, new commissions, and the city’s permanent collections.

Victoria Pomery has worked in the arts all her life. In 2002 she was appointed as the founding Director of Turner Contemporary to develop an arts organisation in Margate as part of a strategy of cultural-led regeneration. Since opening in 2011, Turner Contemporary has welcomed more than a 3.5million visits. Victoria is responsible for the artistic and strategic vision of the organisation. In 2019 Turner Contemporary hosted the Turner Prize exhibition and Victoria was on the jury. Victoria was awarded an OBE for services to the arts in 2012 and an Honorary Doctorate from Canterbury Christ Church University in 2020. Victoria is a trustee of the Bethlem Gallery and a Kent Ambassador. 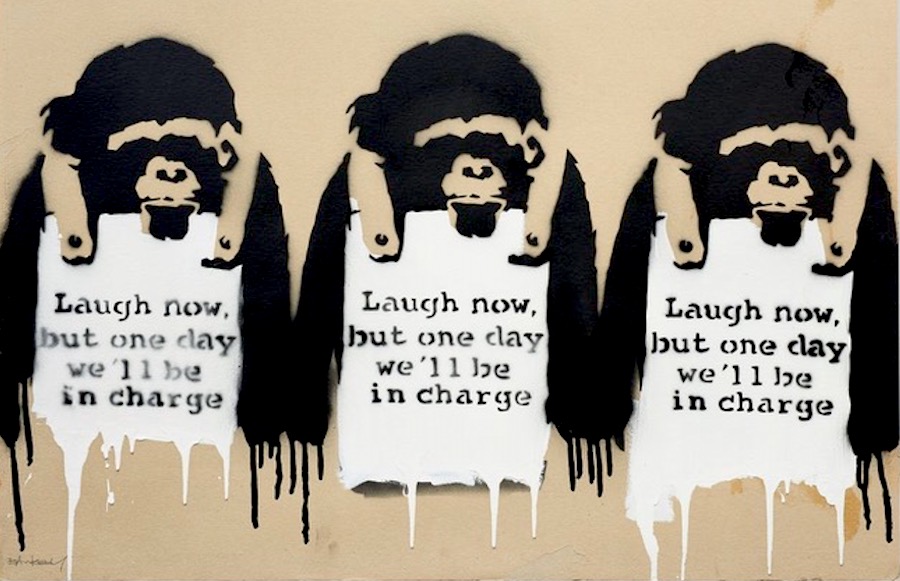 It’s been a tough week for the Street Artist Banksy Banksy. Not only has he lost his second trademark battle, this one concerning his monkey sandwich sign image, but also one of his iconic murals has been put on display for the first time since it was hacked from the side of a building, much to the anger of locals living close to the original location that it was painted.

The latest ruling by the European Union Intellectual Property Office (EUIPO) follows a decision not to grant the trademark of Flower Thrower. an image painted for a nightclub in Brighton in 2002.

Banksy’s monkey wearing a sandwich board that reads “Laugh now, but one day we’ll be in charge” sold at Christie’s New York on May 11 for $2.1m.

Pest Control, the body that authenticates Banksy’s body of works, filed an EU trademark for his “monkey sign” work in November 2018. It was registered in June 2019. A greeting card company in 2019 used the image, claiming it was not filed in good faith, which made it non-distinctive.

Meanwhile, A Banksy mural has been put on display for the first time since it was hacked from the side of a building, much to the anger of locals close to the original location that it was painted.

Hula-hoop girl, as it is known, appeared on a wall in Nottingham in October and was later claimed by the artist on his website.

It was bought by gallery owner John Brandler and cut from the wall for “safekeeping”. The Moyse’s Hall Museum in Bury St Edmunds, Suffolk, said it was “amazing” to have the work as part of an exhibition, which opens on Sunday.