He never crossed over into celebrity. He’s famous because he made a mark. He collected the world – Nan Goldin

Frank was born in Switzerland but emigrated to the United States in 1947. He was best known for his 1958 beat work, The Americans – a book which chronicled his 10,000-mile journey across America at the height of the Cold War. It was first published in France and then in the US. 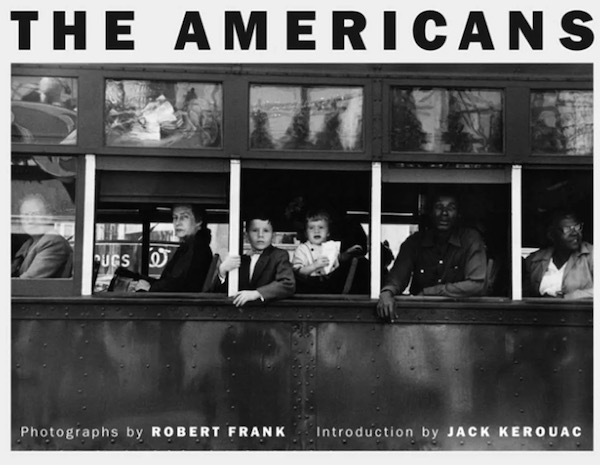 In 1955, Frank received worldwide recognition when Edward Steichen included seven of his photographs (many more than most other contributors) in the world-touring Museum of Modern Art exhibition, The Family of Man. The show was to be seen by 9 million visitors and with an accessible catalogue that is still in print. Frank’s contributions had been taken in Spain (of a woman kissing her swaddled babe-in-arms), of a bowed old woman in Peru, a rheumy-eyed miner in Wales, and the others in England and the USA, including two (one atypically soft-focus) of his wife in pregnancy, and one of six laughing women in the window of the White Tower Hamburger Stand on Fourteenth Street, New York City

Critic Sean O’Hagan said in 2014, The Americans “changed the nature of photography, what it could say, and how it could say it. [ . . . ] it remains perhaps the most influential photography book of the 20th century.” Frank later expanded into film and video and experimented with manipulating photographs and photomontage.

The Americans was widely condemned by critics, as it depicted a country sharply at odds with a glossed over America, portrayed by Hollywood.

Earl A Powell III, art historian, and museum director, said the work showed “a people plagued by racism, often ill-served by their politicians, intoxicated with the media and celebrities, and infatuated with speed, movement, and even the road itself”. Sounds familiar?

Frank shot on a small 35mm camera without a motor, so unlike today where you’d find near-identical frames sides by the side, his contact sheets reveal how he had moved through the crowd, seizing moments of interest. The Americans is a book that flows from front to back, a visual poem where sequencing was all-important. Frank’s loose style broke the mold. He shot around 28,000 images that were edited down to 83 for a book that rewrote the rules of photo-journalism.

Beat poet Jack Kerouac wrote in the preface to the book’s US edition, Frank “sucked a sad poem right out of America on to film.” Frank went on to make many films, including a documentary about the Rolling Stones 1972 tour of America which the group banned from being shown as it captured moments of drug-taking.

Frank had moved away from photography to concentrate on filmmaking. Among his films was the 1959 Pull My Daisy, which was written and narrated by Kerouac and starred Ginsberg, Gregory Corso and others from the Beat circle. The Beats emphasized spontaneity, and the film conveyed the quality of having been thrown together or even improvised. Pull My Daisy was accordingly praised for years as an improvisational masterpiece, until Frank’s co-director, Alfred Leslie, revealed in a November 28, 1968 article in the Village Voice that the film was actually carefully planned, rehearsed, and directed by him and Frank, who shot the film with professional lighting.

He survived both of his children.  His daughter died in a plane crash aged just 20, and his son Pablo took his own life in 1994. Frank acquired a reputation for being a recluse (particularly since the death of Andrea), declining most interviews and public appearances. He continued to accept complex assignments, however, such as photographing the 1984 Democratic National Convention and directing music videos for artists such as New Order (“Run”), and Patti Smith (“Summer Cannibals”). Frank produced both films and still images, and helped organize several retrospectives of his art. His work has been represented by Pace/MacGill Gallery in New York since 1984.