London: The Roman Temple of Mithras, dating from the third century, nearly 1,800 years ago, has been unveiled in its reconstructed form on the site of its original discovery in the heart of the City of London. London Mithraeum Bloomberg SPACE is a free new cultural destination created as part of the development of Bloomberg’s new European headquarters. It opened to the public on Tuesday 14 November 2017.

The Roman Temple is brought to Life in New Cultural Experience which marks a new direction for the interpretation of archaeological remains in the capital. With its own, independent entrance along Walbrook, the three-storey space showcases the reconstructed temple seven metres below the streets of modern London, at Roman ground level. The temple is introduced on a mezzanine, directly above it, by a display of projections and interactive kiosks that invite visitors to explore the practices and symbols associated with the cult of Mithras. 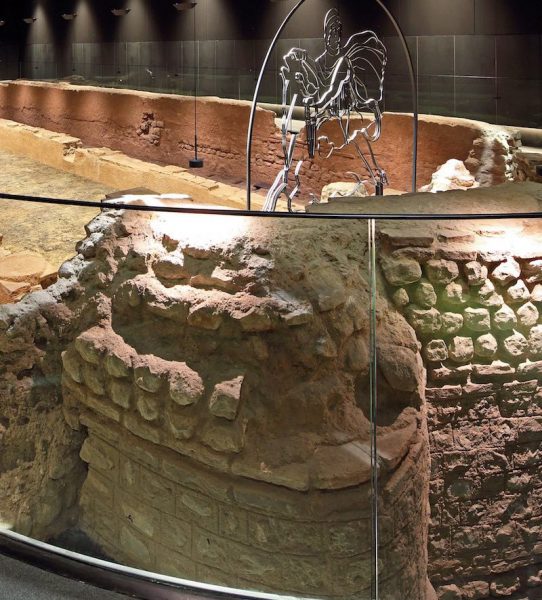 The immersive temple reconstruction uses carefully directed lights, haze and sound to bring the temple’s remains to life, and to evoke the rituals and activities that took place within its cave-like walls. The memorable reconstruction marks a new direction for the interpretation and presentation of archaeological ruins.

As the town prospered and expanded, the banks of the Walbrook were reclaimed, and Roman London became not only a major port of trade but a bustling economic centre in its right. At its height, it had a population of around 30,000 people contained within the boundary of its city walls. Parts of these walls survive in an area roughly corresponding to the ‘Square Mile’ of the City of London, which remains London’s centre of commerce today. In the 3rd century AD, nearly 200 years after the founding of Londinium, a Roman Londoner built a temple to the god Mithras next to the Walbrook.

The Temple of Mithras, perhaps the most famous Roman discovery in 20th century London, was found by chance in 1954 on a bomb site where the Bloomberg building now stands. The near-complete footprint of the temple emerged from the rubble, a symbol of London’s endurance. It immediately became a public sensation, attracting front-page news and queues of up to 30,000 visitors a day over a two week period.

Debate raged in government and the press about what should happen to the ruin. Eventually, it was dismantled and moved to make way for essential rebuilding. In the 1960s, it was roughly and somewhat inaccurately reconstructed 100 metres away from its original location. Bloomberg acquired the site in 2010 and committed to reinstating a more faithful, publicly accessible reconstruction of the temple. 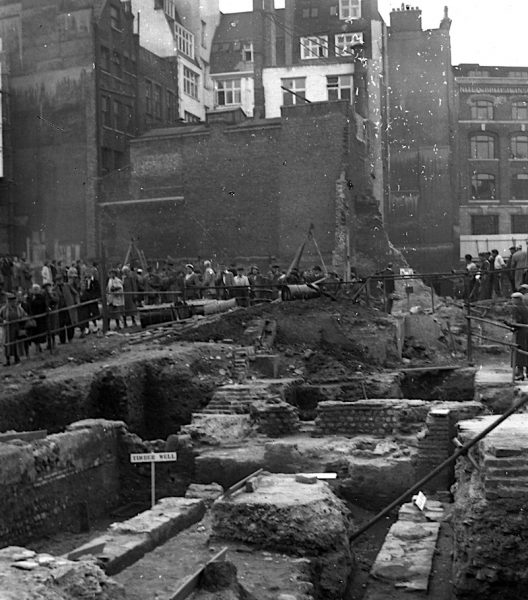 People queue to see the Temple of Mithras in 1954 © MOLA

A team of skilled archaeologists, stone masons, conservators and designers have created the reconstruction working from original archaeological drawings, models, photographs, first-hand testimonies and newsreel footage. The project has taken ten years to complete and has been funded and created by Bloomberg, working closely with the City of London and a team of conservation specialists, in consultation with the expert team at MOLA (Museum of London Archaeology). The immersive display within the temple was created by an interdisciplinary team led by internationally-recognised design rm Local Projects.

More than 600 items of the 14,000 uncovered during the Bloomberg dig, carried out in advance of construction for Bloomberg, were carefully selected for display in London Mithraeum Bloomberg SPACE. These precious items include the first financial document from Britain, etched on a wooden tablet, a tiny amber amulet in the shape of a gladiator’s helmet and a hoard of pewter vessels that may have been used in rituals within the temple. A digital interactive resource that delves deeper into the wealth of the archaeological discoveries from the Bloomberg dig is accessible via mobile devices.

Responding to the site’s history, Bloomberg SPACE features a rotating programme of commissioned works by contemporary artists. Another View from Nowhen, an installation by Dublin-based artist Isabel Nolan. The commission includes two new site-specific c works: The Barely Perceptible Vibration of Everything, a large, hand-tufted tapestry, and Blind to the Rays of the Returning Sun, an open-form steel sculpture.
A digital book titled Archaeology at Bloomberg reveals the findings from MOLA’s recent excavations of the site and the fascinating story of the Temple of Mithras.

London Mithraeum Bloomberg SPACE is designed to be an educational and inspirational destination for London’s residents and international visitors. It is accessible free of charge, Tuesday to Sunday.