Right now, in terms of the shows, it’s offering the public, the Royal Academy is on a roll. There’s been one great, news-making exhibition after another, under the guidance of its Director of Exhibitions, Tim Marlow, who came to them from White Cube.

The one event over which Mr. Marlow can’t exercise much, if any, influence is the R.A’s annual summer exhibition – the event that the R.A. was in fact founded, all those years ago, to present. This huge mixture of the good, the bad, and for most part the simply indifferent consist of work by the R.A.s own membership, by those from outside whom it chooses to invite as Honorary R.A.s, and from a massive public send in, both from those who see themselves as professionals and also from hopeful amateurs.

In a certain sense, the R.A. has recovered its mojo. It no longer represents, as once upon a time it did, in the era of Sir Alfred Munnings PRA (President from 1944-1949), a steadfast opposition to Modernism in art. 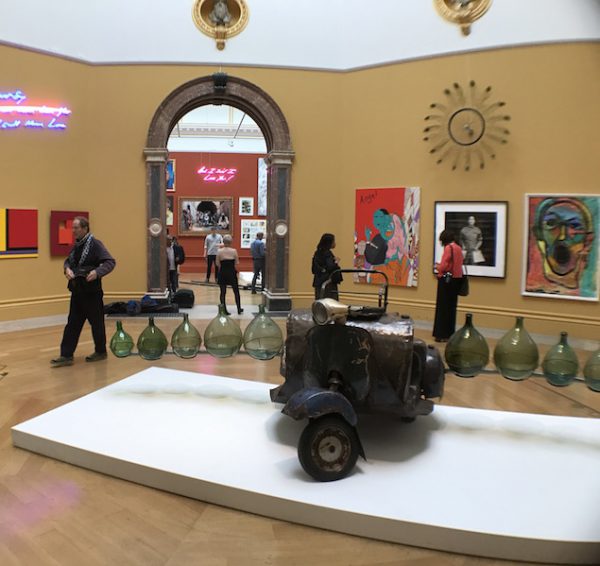 This year, nice pictures of gee-gees, like those produced by Munnings, made for an appreciative, moneyed, upper-middle-class audience, are conspicuous by their absence. A Wind Sculpture by Yinka Shonibare greets you in the courtyard. You see paintings by a current art world darling, Lynette Yiadom-Boakye immediately as you go in. In the Central Hall, as you enter, there is a neon wall piece by Tracey Emin R.A. that proclaims I Did Not Say I Can Never Love You I Said I Could Never Love. In the same space, there are works by Sir Michael Craig-Martin R.A., Jim Dine Hon R.A,, and Marina Abramovic Hon R.A.

In our own, contemporary terms, what could be cosier. All’s right with the art world. Those whom Munnings would have dismissed as lunatics have taken over the asylum.

In one way this is a very good thing. One of our most venerable cultural institutions demonstrates that it is completely in step with the times. There’s even one gallery given up to a single, immersive video work, shown on multiple screens.

The trouble is, however, that so much of what you see, the work of the famous, the not famous, and a few of the infamous, all jammed together makes an impression that is terminally bland.

Though, for example, abstract works are not numerically in the majority, they tend to be bigger and more ambitious than the figurative ones, and, offered as they are here, wall upon wall, room after room, with the occasional big abstract sculpture plonked in the middle of a space, they tend to dull one’s attention to the point of actual somnolence.

The sculptures included – actual three-dimensional objects – are in fact particularly weak. It says something that the one I remember most vividly, placed a long way into the show, is a quarter life-sized image of the late Amy Winehouse that seemed to be made entirely of beads. In the same gallery, there is a large model of a galleon, composed of strings of pearls. Pretty good for some rich girl’s Christmas stocking, but Christmas is still a long way off and you’d need a giant stocking to put it in.

I think what the show conjured up in my mind, once I had left it, was old prints showing the R.A. Summer exhibitions of the past. The same crowded walls jammed row on row and tier on tier with works of art that had somehow seemed to have lost all meaning as individual communications – you, the artist, to me, the spectator. I had participated in a venerable cultural rite but was unsure what if anything, I had got out of it,