A Peter Paul Rubens masterpiece ‘Samson and Delilah’ (ca. 1609/10), listed as one of the 30 most important paintings in London’s National Gallery collection, is a copy or possibly a 20th-century fake. The painting was purchased in 1980 for £2.5m, a staggering sum at the time. Experts have long disputed the origin of this much-loved work.

AI was used to compare the work to 148 authenticated Rubens paintings, and the tests returned a result concluding there was a 91 percent chance that the painting was not by the artist Rubens. Brushstrokes were collated and analysed. “I was so shocked, we repeated the experiments to be really sure that we were not making a mistake, and the result was always the same. Every patch, every single square, came out as fake, with more than a 90 percent probability;” Carina Popovici from the Swiss firm Art Recognition added.

The Chancellor Rishi Sunak stated in his Autumn budget speech yesterday, “A levelling up is is needed to protecting our unique culture and heritage. The British Museum, Tate Liverpool, the York Railway Museum and others, we’re investing £850m to protect museums, galleries, libraries, and local culture. Thanks to the Culture Secretary, over 100 regional museums and libraries will be renovated, restored and revived. She’s secured up to £2m to start work on a new Beatles attraction on the Liverpool waterfront.

We’re also going to review our museum freedoms. And make our creative tax reliefs more generous. On current plans, the tax relief for museums and galleries is due to end in March next year. Just as exhibitions are starting to tour again – so I’ve decided to extend it, for two years, to March 2024. And to support theatres, orchestras, museums and galleries to recover from covid”; He added.

Arts Council England Chair Sir Nicholas Serota responded, “Today’s budget and spending review are welcome news. We’re grateful to the chancellor for backing investment in creativity and culture for everyone and looking forward to working with the DCMS to ensure this investment will benefit communities across England.” 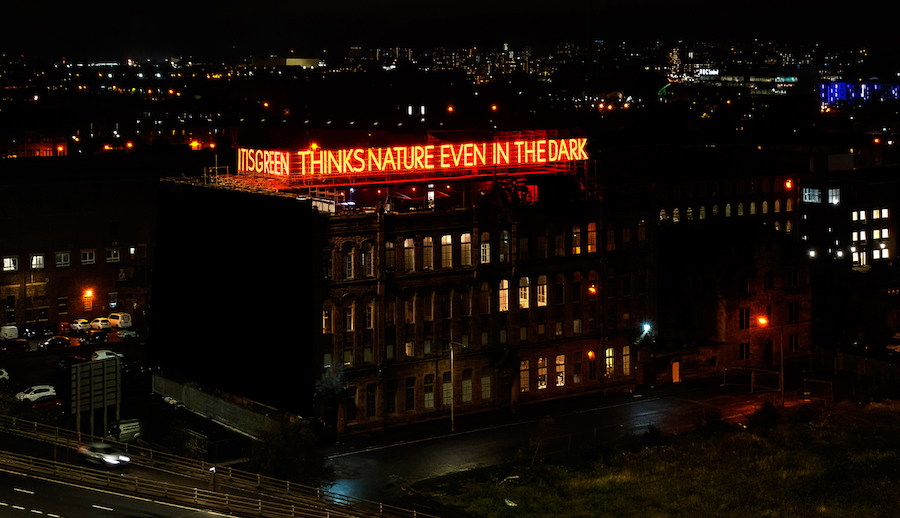 This large-scale public work of art consists of 3 meter high illuminated neon characters that spell out the phrase: IT IS GREEN THINKS NATURE EVEN IN THE DARK by the conceptual artist Mary Ellen Carroll / MEC studios. The work of art is a beacon for calls to action and a philosophical starting point for the public to think and act on the ‘existential crisis’ our lifetime. It will be inclusive of individuals, institutions, governments, and corporations to commit and act. This path marking process and its instrumentalisation will accomplish the acts in reality and impact the visible climate emergency as extreme weather’ occurrences’ we are witnessing and experiencing. The installation explores the random nature of language and meaning as a continuous loop that one can enter at various points and is how global warming can be made visible and understandable as a sign.

Carroll is working with numerous organisations on policy and programs at the intersection of climate, migration, and infrastructure. An announcement will be made during COP26 of a future collaboration and program. Support for the production of indestructible language has been provided by: MCM, Stardust, TransArt Foundation, Urban O ce and private donors that are committed to climate action. Programming alliances are with The Corner at Whitman-Walker, The Storefront for Art and Architecture, Terra Firma, and 2030 Visions.

The recipient of numerous grants and honours, including the 2022 Prix de Rome, a Graham Foundation Fellowship for prototype 180, IASPIS, a Guggenheim Fellowship, Pollock/Krasner Awards, a Rockefeller Foundation Fellowship, and a Rauschenberg Fellowship. Teaching, lecturing and public presentations in architecture and policy are an essential part of Carroll’s work and institutions have included Rice University—Houston, Columbia University—New York, Yale University, and the DIA Art Foundation, amongst others.

For the Glasgow installation, indestructible language was produced by SOLAS Neon in Edinburgh, Scotland. The renowned type designer Chester Jenkins / VLLG Type created the font and lettering specifically for the artwork. The site location for the installation in Glasgow fronts the M8— the busiest motorway in Scotland and it is installed on The Schoolhouse. This Victorian school is owned by the rm Urban Once, who provided additional support for the installation of the artwork. The colour red was selected for the neon for its high visibility. It is universally understood as a warning sign and the warmest colour in the visible spectrum. The indestructible language was initially commissioned in 2006 by The Precipice Alliance, founded by the photographer Joel Sternfeld and Donna Wingate to produce high pro le public works of art on existential crises. It was installed on the American Ca (CANCO) on the Pulaski Skyway in Jersey City, New Jersey. The original neon fabrication was done by LiteBrite Neon in Brooklyn, New York.

indestructible language will be illuminated on Saturday, October 30th at 7:00 pm