The Russian performance artist Petr or Pyotr Pavlensky best known for nailing his scrotum to Red Square and his partner have fled the country after being accused of “violent actions of a sexual nature” The pair were questioned for seven hours before being freed. Pavlensky claims the allegations are false and argued that it was intended to get rid of him. Pavlensky, 32, who calls himself a political artist, has faced criminal charges several times for his work. Most recently he spent seven months behind bars after torching the door of Russia’s intelligence agency.

Along with his partner Oksana Shalygina the pair were detained by police last month at Moscow’s Sheremetyevo airport as they returned home. Under questioning, they learned that an actress they had been involved with had accused them of a sex crime. Officials have confirmed an investigation is under way. “There was nothing at all even remotely resembling violence. Of course not,” the artist told the BBC, adding that the couple – who have an open relationship – learned of the accusation whilst abroad. Pavlensky and  Shalygina drove to Ukraine before travelling on to France

The performance artist is also known for sewing his lips together in support of all-female punk group Pussy Riot. He also wrapped himself in barbed wire and lopped off an earlobe while sitting naked on the wall of a psychiatric institute. Since his release from jail last summer he believes he has been under surveillance; he also suggested that ill-wishers had tried to spur him on to more radical action, which he saw as a trick. 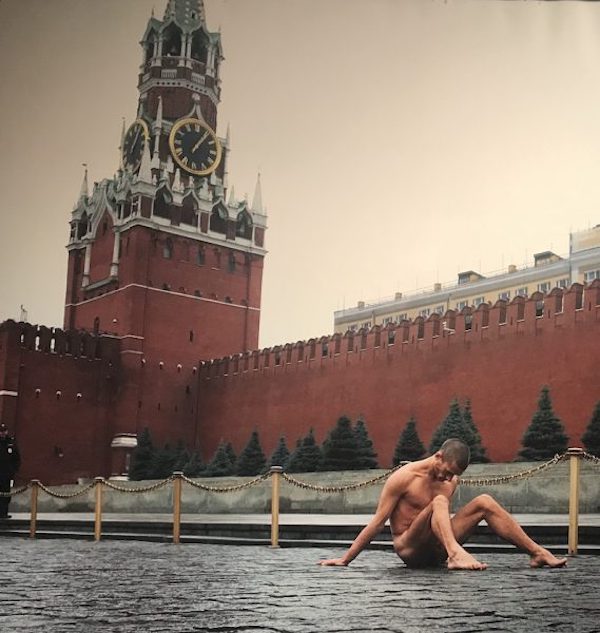 He reflected that the charge of sexual assault was also politically motivated. “Of course they want to get rid of what gets in their way,” he said. “We think they were showing us that we had two options. Either we would be liquidated from the political context, in a regime prison. Or we could leave the country,” the artist said.

The staff at drama company Teatr.doc – known for its liberal, opposition agenda – have defended the actress involved, dismissing any suggestion that she’s some kind of agent for Russia’s intelligence services. They also allege that the artist had previously beaten up her boyfriend, and have released CCTV footage of an incident.

Pavlensky stated he planned to ask for political asylum in France if formal charges are eventually brought. “I have no desire to return like a lamb to the slaughter,” the artist told the BBC by phone. “Especially a slaughter that is desired, by the state.”