Dame Jillian Sackler, third wife of the late Arthur Sackler has defended her branch of the family’s philanthropic donations with a statement to the Washington Post, outlining that her side of the family has never participated in the manufacture of OxyContin or benefited from money generated by Purdue Pharma, which is wholly owned by the other side of the Sackler family.

Tis but thy name that is my enemy; Thou art thyself, though not a Sackler

Her stepdaughter, Elizabeth Sackler, 70, (Arthur’s daughter from an earlier marriage) has also expressed dismay, pointing out that her branch of the family had not gained a ‘jot’ from OxyContin, which was invented after they were bought out in the wake of her father’s death in 1987. She has called the OxyContin fortune amassed by Arthur’s brothers the descendants of Mortimer and Raymond Sackler (both now deceased) “morally abhorrent”. Elizabeth is best known for donating the Elizabeth A. Sackler Center for Feminist Art at the Brooklyn Museum in New York.

Elizabeth’s stepmother, British-born Jillian Sackler, who lives in New York and London is a trustee at the Royal Academy of Arts. She has called on the other side of the Sackler family (some who still sit on the Purdue Pharma board) to acknowledge their “moral duty to help make this right and to atone for mistakes made”. This moral shaming from within the family has not affected the situation. Instead, the family has hidden behind a wall of expensive lawyers. These reprobates have written to Artlyst on two occasions demanding corrections be made to our editorials. They clearly have a PR mega-machine watching every article, blog entry and Tweet with a growing paranoia, adding to the dysfunctionality of the family-run trusts. 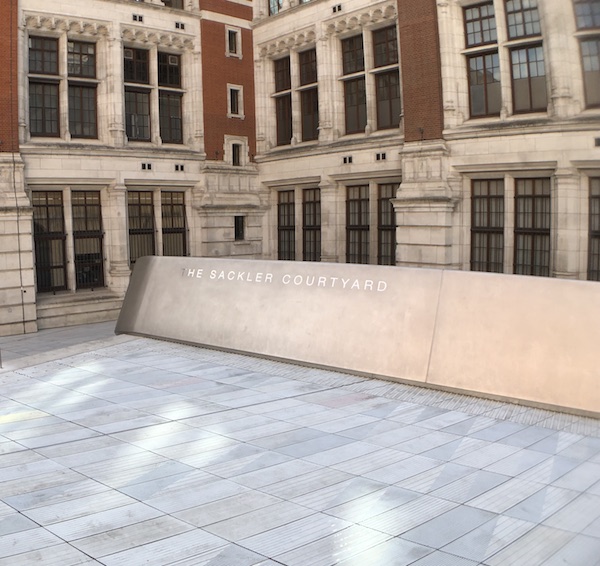 Recently a number of high profile institutions including The National Portrait Gallery, The Guggenheim and Tate have dropped the family name from their future donors’ lists, after public outrage and protest.

The award-winning photographer Nan Goldin, a rehabilitated OxyContin addict has spearheaded the successful campaign ‘Sackler-Pain’. Ms Goldin has spent over a year raising awareness of Purdue Pharma, who in return has embarked on a major PR campaign to undermine Goldin in order to save the reputation of the Sackler’s lucrative meds industry. Quite frankly, if they were genuinely concerned about tackling the opioid crisis, they would just stop the production of OxyContin and set up rehab facilities for all addicts affected by the drug. Although this is too little too late. It has been reported, that the company allegedly has been winding down marketing in the US to concentrate on drug sales globally, including the third world.

Dame Jillian and Dr Arthur M. Sackler’s Foundation for the Arts, Sciences and Humanities has been a high profile name donating to the arts and sciences.

Dame Jillian stated to the Washington Post: “We live in an age when assigning blame has become a national obsession, especially when it comes to the horrors of the opioid crisis. How did this happen? Who is responsible? Hearsay builds upon hearsay in the search for culprits, until guilt is assumed — without evidence.

My late husband, Arthur Sackler, who died in 1987, has been found guilty by association — along with the rest of what is referred to by the blanket designation “the Sackler family” — because of some family members’ association with Purdue Pharma, the maker of OxyContin. Yet like most families, the Sackler family is not a monolith. Neither Arthur nor his heirs had anything to do with the manufacture or marketing of OxyContin. Suggestions that his philanthropy is now somehow tainted are simply false.

Purdue Pharma in its current form was founded by Arthur’s younger brothers, Mortimer and Raymond, four years after his death. None of the 1,600-plus lawsuits filed against Purdue Pharma, members of the Sackler family or others in the opioid business names Arthur or his heirs as defendants.

Arthur died of a heart attack nearly 32 years ago at age 73, nearly a decade before OxyContin came to market. He was a psychiatrist, researcher and successful medical marketer in the nascent years of modern advertising. In 1960, he published one of the first newspapers for doctors, which eventually was distributed to 20 countries in eight languages. As a respected American medical expert, he was invited in 1976 to advise the Chinese Ministry of Health.

In addition to his work in medicine, Arthur was an avid art collector and connoisseur. During the 1950s he started several personal foundations for the arts, sciences and humanities. During the 1960s he funded the first Asian art gallery at the Metropolitan Museum of Art, in an era when Asian art was underappreciated in the United States. In the 1980s, he donated 1,000 remarkable pieces of Asian art to the Smithsonian Institution and helped fund the construction of a museum to house them. He died a few months before the museum bearing his name opened on the Mall.

It is incredible to me that last year, the Smithsonian’s Arthur M. Sackler Gallery of Art was the target of demonstrators protesting the opioid crisis. Other institutions that benefited from his philanthropy have also been targeted. Even critics who acknowledge that Arthur died long before the invention of OxyContin nevertheless maintain that he somehow shares responsibility for this scourge because he was a pioneer in medical marketing, and medical marketing has encouraged the spread of OxyContin.

Arthur is not here to answer back, but I can tell you that blaming him for OxyContin’s marketing, or for any other wrongdoing by the pharmaceutical industry, is as ludicrous as blaming the inventor of the mimeograph for email spam.

Fair-minded people who see the terrible consequences of the opioid crisis understandably seek justice and restitution. They demand that legal settlements fund treatment centers for all in need. For that, I am in wholehearted support.

But make no mistake: Vilifying an innocent man is wrong. It does nothing to help the United States come to grips with the epidemic, nothing to advance solutions. It is profoundly hurtful to his family and to institutions such as the Smithsonian, which are now unjustly under pressure to distance themselves from his name and his gifts” – Dame Jillian Sackler Writing in the Washington Post  Read More

The Evening Standard has pointed out; “Critics are unimpressed by what they call Purdue Pharma’s “hot air”. They point to their failure to fund any rehab facilities to help the thousands of people whose lives have been ruined by OxyContin.

The Mortimer and Raymond Sackler families continue to draw millions every year from their shareholdings in Purdue Pharma and Napp, the British arm of their pharmaceutical empire. The family has received more than £200 million in dividends in the past 10 years. Raymond’s son Richard Sackler former Chairman and President of Purdue Pharma at the time OxyContin was developed and aggressively marketed was not mentioned when three executives (none of them Sacklers) pleaded guilty in 2007 agreeing to pay more than $600 million for misleading the public about the risks of the drug which has killed over 200,00 people in the US alone. In our minds, the settling of this lawsuit is an admission of (some form of) culpability, regardless of how their lawyers want to phrase it! There are many more lawsuits in the pipeline, which could force Purdue Pharma to shut down altogether.

The two charitable funds overseen by The Sackler Trust and Dr Mortimer and Theresa Sackler Foundation have in recent years paid for philanthropic projects in the UK amounting to £80 million.