The Serpentine Galleries (London) and WF CENTRAL (Beijing) have announced a major international collaboration: a new architecture Pavilion, designed by JIAKUN Architects, at the WF CENTRAL development in Beijing. Modelled on the Serpentine’s annual Pavilion commission in London’s Royal Park of Kensington Gardens, the inaugural Serpentine Pavilion Beijing will launch in May 2018 at the opening of WF CENTRAL on Wangfujing in Beijing’s Dongcheng District. Located just 600m away from the historic Forbidden City, this bustling area has been home to cultural and commercial activities since the middle of the Ming Dynasty. The Serpentine Pavilion Beijing will be a public space for cultural activities, events and social encounters at the very heart of WF CENTRAL.

This exciting collaboration marks the first Pavilion co-commissioned and built by the Serpentine outside the UK.

The eminent Chinese practice JIAKUN Architects, led by architect Liu Jiakun, has responded to the brief of designing a world-class temporary Pavilion that takes into consideration both the historic and social context of Beijing and the 17-year history of the Serpentine Pavilion commission. Initiated in 2000, the London scheme has showcased renowned architects from Zaha Hadid to Rem Koolhaas.

With a focus on society, community and a respect for local context and vernacular craftsmanship, Liu Jiakun aims to address contemporary architectural issues with a sense of realism, an approach inspired by folk wisdom. His vision remains open to China’s many traditions and his projects shed light on the reciprocal relation between Chinese public life and urban cultural space. 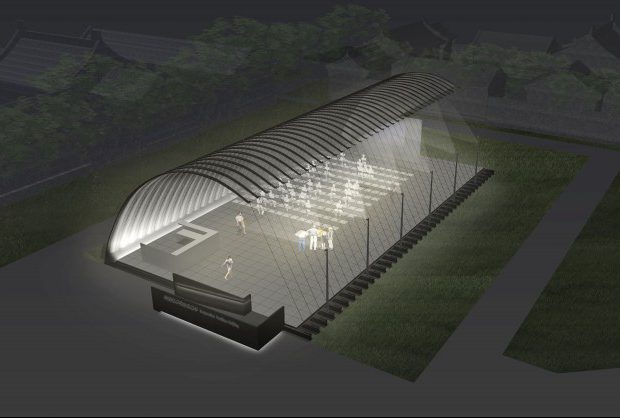 JIAKUN Architects’ Serpentine Pavilion Beijing takes inspiration from Confucianism with an architecture that is a physical representation of the traditional pursuit of Junzi. The design is characterised by the figure of the Archer, in the form of a curved cantilever beam that incorporates the forces of elasticity through cables stretched between steel plates. Although modern architecture in Beijing has developed a series of powerful techniques to fight the external forces of fierce winds and unpredictable earthquakes, the Pavilion’s integral structure aims – like the Tai Chi Master – to conquer the harshness of those forces with softness.

This exciting collaboration marks the first Pavilion co-commissioned and built by the Serpentine outside the UK. Previous Serpentine Pavilions have enjoyed a life after – and outside – London: Zaha Hadid’s 2000 Pavilion has relocated to Cornwall, UK; Toyo Ito’s structure is in the grounds of Le Beauvallon in Sainte-Maxine, France, Sou Fujimoto’s Pavilion is on show in Tirana, Albania, courtesy of the LUMA Foundation; and Smiljan Radić’s Pavilion is at Hauser & Wirth, Somerset, UK. Francis Kéré’s 2017 Pavilion is moving to Ilham Gallery in Malaysia.

The inaugural Serpentine Pavilion Beijing will be in place at WF CENTRAL for six months. The commission represents a unique cultural association between the Serpentine Galleries and WF CENTRAL, marking the beginning of a partnership that has the potential to unfold in various ways, founded on a shared passion for architecture and design.

JIAKUN Architects was founded by Liu Jiakun in 1999. Since then, JIAKUN Architects has organised and participated in numerous international collaborations and exhibitions. As a multidisciplinary office, JIAKUN Architects works with clients from across the globe, specialising not only in architectural design, but also large-scale planning, urban design, landscape, interior and product design, and installation art.

Bridging two sites and multiple worlds in the heart of London’s Kensington Gardens, the Serpentine aims to inspire the widest possible audiences with the urgency of art and architecture today. Situated in a classical 1934 tea pavilion, the original Serpentine Gallery is a unique space for modern and contemporary art, which underwent a £4m renovation by John Miller + Partners in 1998, under the patronage of Diana, Princess of Wales. With the opening of the Serpentine Sackler Gallery in 2013, designed by Zaha Hadid Architects, the Serpentine attracts up to 1.2 million visitors a year to its programme of exhibitions, education projects, public programmes, digital commissions and its annual architecture commission.

The Serpentine Pavilion, conceived in 2000, is a watchword for architectural experimentation, presenting the first UK project of some of the world’s greatest architects. Each pavilion is sited on the Serpentine Gallery’s lawn for four months and the immediacy of the commission – taking a maximum of six months from invitation to completion – makes it a unique model worldwide. The pavilion was named the most visited architectural and design exhibition in the world in 2016.

It has a further 165,000 sq m. of office space in Singapore mainly held through joint ventures, and a 50% interest in a leading office complex in Central Jakarta. The Group also has a number of residential and mixed-use projects under development in cities across Greater China and Southeast Asia. In Singapore, its subsidiary, MCL Land, is a well-established residential developer. Hongkong Land is a member of the Jardine Matheson Group.

WF CENTRAL is Hongkong Land’s leading premium lifestyle retail centre in China at the commercial and political heart of the capital city, with the design and scale to both respect and revitalise the historic fabric of the Wangfujing area. Occupying a prime site of approximately 21,000 sq m on Wangfujing Street in Dongcheng District, Beijing, WF CENTRAL is bringing the community a total of 150,000 sq m. gross floor area – including a 74-room Mandarin Oriental hotel. The property will also offer 50,000 sq m. of retail space. Bringing together an unparalleled range of luxury, fashion and lifestyle, wellness, world-class gastronomy and art and culture experiences, WF CENTRAL is set to offer a new Beijing lifestyle experience with the opportunity to find inspiration, enjoy culture and a new global perspective.