Here I focus on a dozen works – rather than reviews of whole shows – which I’ve found of interest recently. We start with pre-history and end with the eternal. The middle has a genital tendency, though here too the infinite sneaks in. 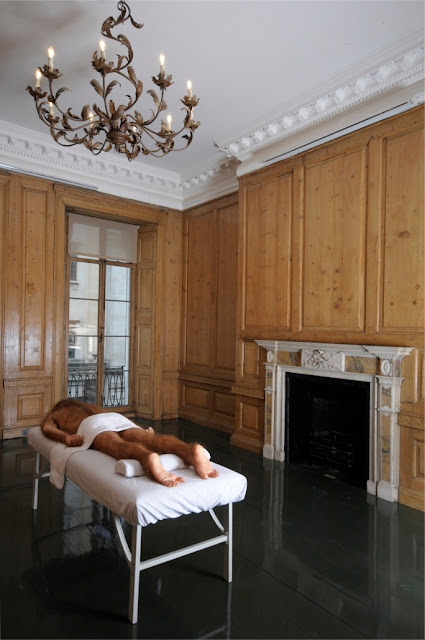 An oak-panelled room with real fire blazing on the first floor of Savile Row makes an appropriate setting for Peter Coffin’s figure awaiting a massage. From you? Well, his hairiness might give you pause, and the divergent big toes and elongated palms indicate that he’s a pre-human – representing, perhaps, the pre-linguistic instincts which still inform our behaviour. Has he had a hard day rioting? He also made me check whether gorillas have such naked soles… 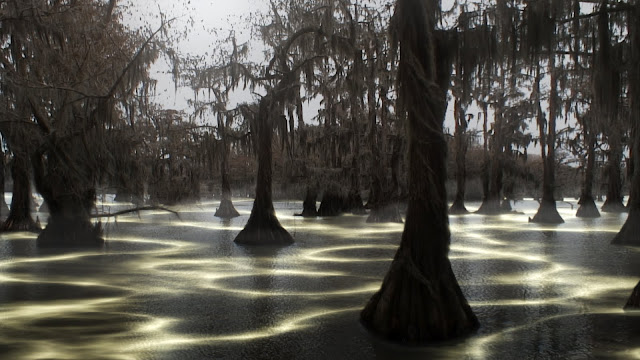 Gordon Cheung has made the best of the rare chance to use three floors to theme his curation ‘Immortal Nature’ around the underworld, earth and afterlife on ascending levels. The most spectacular work is a 20 minute loop by another Canadian, environmentally-focused video artist Kelly Richardson, of the swampy Caddo Lake in Texas. It’s given an ominously drone of a soundtrack and digitally altered to toxify the colours and enhance the post-apocalyptic mood. The title’s allusions to Hobbs (“the life of man, solitary, poor, nasty, brutish and short”) and the sea monster that guarded the gates of Hell fit right in… 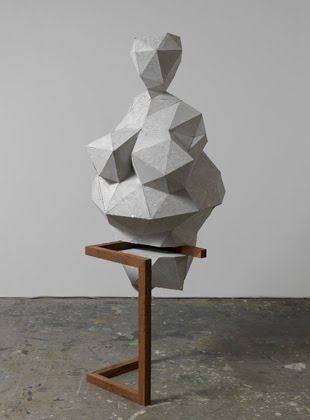 This, from Ziegler’s most persuasive show to date, is one of his sculptures which play off the degradation of images by making 3D computer renditions from pictures of ancient art objects sourced from the internet, then realising them using oxidised aluminium panels. Approximation is built in, so that they tempt yet frustrate any attempt to deduce their origins, and the title ‘Metaplasmus’ suits, being the alteration of a word to create a rhetorical effect (such as calling a God a ‘goldlet’ to suggest limited powers). I also like the way the frame-come-plinth stands in for limbs. 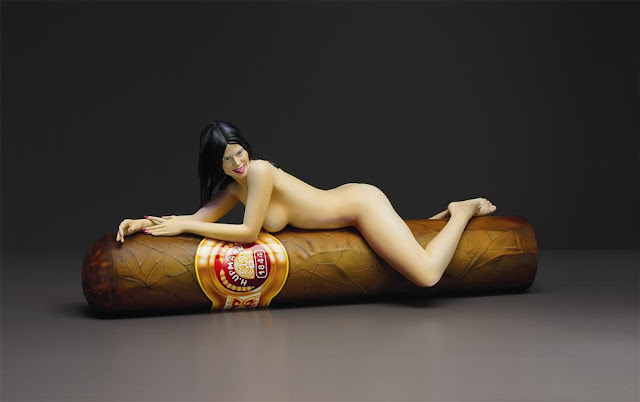 The auction houses have made for diverting viewing of late. Here the cigar ( a Cuban Corona Imperiales with a rich, oily flavor and long-lasting finish) accounts for the odd title . You might think it a comically phallic way to equate sexual and consumer desire, but Ramos protests – perhaps too much – that “people make references to my work as sex, which is simply not true. Sex is an activity and nudity is a condition. When I do a painting, everybody calls them pin-ups. When Picasso or Matisse did nude paintings, people called them nudes… Jesus.” 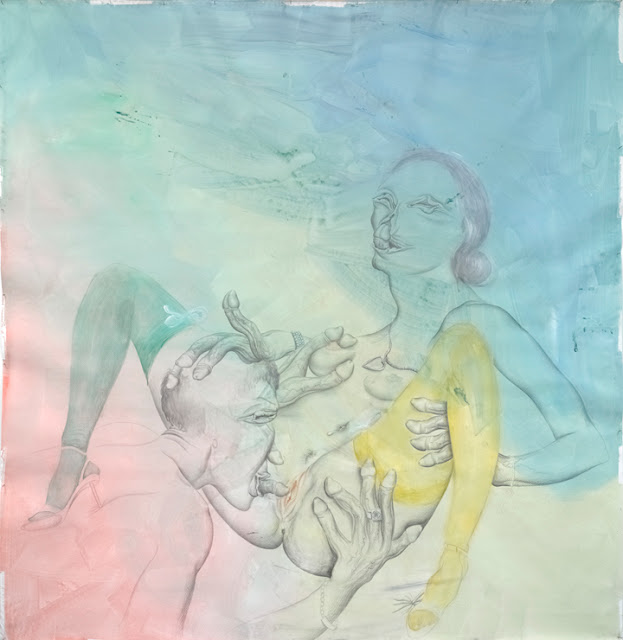 Bernhard Martin paints in many modes, but tends to push them all to extremes. Certainly the German’s recent cycle of six pencil and wash drawings on canvas delivers in that respect, as most body parts become genital in a Genet-inspired romp through the territory of Freud, Bellmer and Dali. Others in the series, which gallerist Jari Lager says features 36 penises, see a cock-fingered hand wield a knife but also get stamped on. If this represents Martin’s search for his own ‘alien abysses and desires’, as the press release has it, that’s a refreshingly weird inner life he has there…. 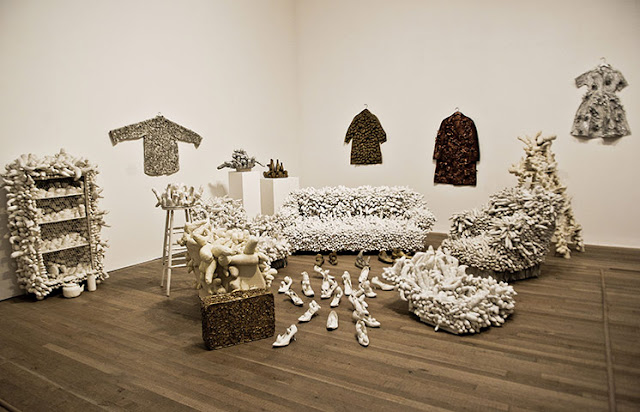 Martin’s cockery has nothing, though, on Yayoi Kusama’s retrospective, which gives rooms over to each of her attempts to reach infinity – through nets, aggregation, mirroring, obliteration, free love and collage as well as her Hirst-trumping spots. She says says ‘obsessional neurosis’ produces the hallucinations which her work represents. The aggregation room sees thousands of stuffed fabric phalli encrusting shoes, clothes, furniture,  accessories and even a boat she co-sourced with Donald Judd. Kusama liked to lie among them, and they seem to be friendly appendages, caught mid-wave in the manner of molluscs as the tide comes in.

Sadie Coles has rented a sizable space over her newest gallery for a year, and handed it over to Sarah Lucas to do what she will. Lucas starts with her own work, and there’s surely a Kusama reference in ‘Mrs Nice Tits’, which actually mixes ‘male’ and ‘female’ forms of her signature stuffed tights, ie those tied into a nipple end vs those completed with a seam which looks like a meatus urethrae externus, to get a bit medical! Sort of like + and – batteries, but funnier. So the male is sneaked in to the swipe, too jocular to be bitter, at the reduction of a woman to her boots and breasts.

Gary Hume it was who opened a can of beer in suggestive manner for Lucas’s ‘Got a Salmon On (Prawn)’, 1994…  I’m not sure if I like the Paradise Paintings in the Mason’s Yard half of his two-site painting show ‘The Indifferent Owl’ , but they do combine courage and logic: the courage comes in choosing to paint birds in such a way that they also represent, in Hume’s words ‘pubescent girls, naked’ – the background forms are splayed legs, the beaks ‘are their pussies’ and the eyes are drops of menstrual blood, all in the manner of the duck / rabbit illusion. That makes the paintings doubly queasy: for content and for the sickly colour combinations, which does seem a logical way of upping the ante of Hume’s way of being too slick ‘n’ sickly to be joyful. 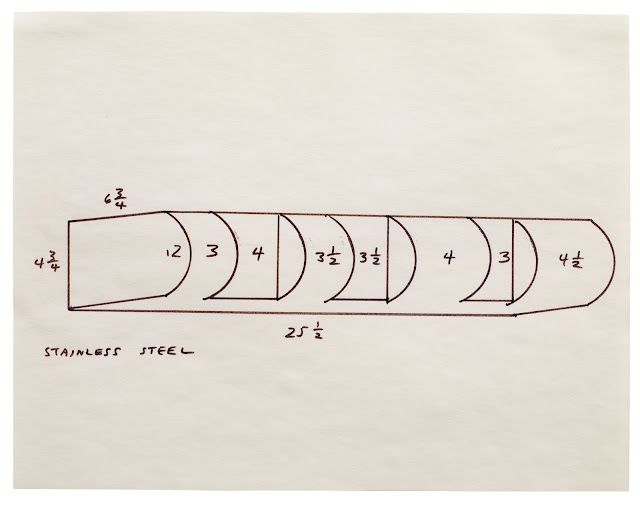 Ex-Judd fabricator Peter Ballantine chose 33 drawings from four different types for this behind-the-scenes show: some preparatory studies from the days (1962-64) when the future lover of Yayoi Kusma made his own sculptures; later ones giving instructions to his fabricators; more formal ‘portraits’ of sculptures as an alternative to photographic records; and drawings made by his fabricators to clarify the brief. The instructions – as above – are minimal enough to give plenty of license, or to ‘gain control by ceding control’, as Ballantine has it. And wasn’t there something Platonic and eternal about the results? 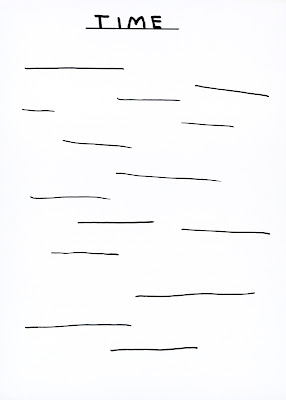 This cute sort-of-picture of the unpicturable has – like many of David Shrigley’s zeit-jests – a Beckettian backdrop of boredom and death. London’s the board for a hail of his absurdist darts at the moment: both the Hayward’s career survey and Stephen Friedman’s show of new work represent his increasingly full range admirably – sculpture, ceramics, installation, taxidermy, sort-of-songs, animation, photography, books, sort-of-paintings – but it’s still the wonkily simple ironies of Shrigley’s drawings which hit the most bullseyes. And the text is much of the charm, as in ‘I Wrote These Words to Fill This Space’ and ‘It Is Possible To Get Lost In Your Own Brain’.

﻿Ruth Ewan: From ‘We Could Have Been Anything That We Wanted To Be’, 2011 in ‘The Curator’s Egg’ at Anthony Reynolds to 3 March

Your antennae should already be attuned to the absurd when you find that the kind of double-sided clock you expect to top a town hall’s tower is down on the floor. And indeed, Ruth Ewan has converted one side to the decimal, dividing the 24 hour day into ten hundred minute periods of a hundred seconds each, so that noon is five o’clock and midnight ten o’clock. This echoes, says Ewan, 5 October, 1793 ‘when the recently formed Republic of France abandoned the widely used Gregorian Calendar in favour of the French Republican Calendar, carrying the ideals of the new republic directly into the lives of every citizen.’ One of ten such clocks, of course, and one of many good bits in this ovum. 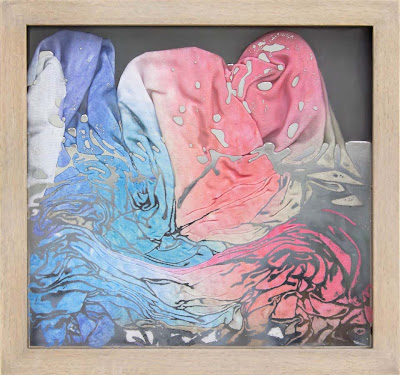 Steve Bishop: As If You Could Only Kill Time Without Injuring Eternity IV, 2011 at Supplement to 17 March

Upcoming London-based Steve Bishop’s solo show at Supplement, ‘Buildings are Heavy’, entertainingly exposes the history of the space, but the stand out works are a series of T-shirts, printed with images rendered illegible by how they are forced-fed into a box frame, around which mercury swims to produce an abstract effect somewhere between brain and mountain. Turn the frame around, and the mercury swims into a new formation, making for a potential eternity of process-derived ‘paintings without paint’.

All images courtesy of the relevant artists and galleries