An immersive art installation, “The Barmecide Feast,” is a fully realised, full-scale reproduction of the iconic, neo-classical hotel room from the penultimate scene of Stanley Kubrick’s and Arthur C. Clarke’s landmark film, 2001: A Space Odyssey. It has been recreated by Hong Kong-based British artist Simon Birch. The Smithsonian’s National Air and Space Museum will host a special temporary exhibition of the room, open to the public April 8–May 28.  The installation will be the centrepiece of the museum’s celebration of the film’s 50th anniversary.

“The Barmecide Feast” was conceived by Birch, and built with help from Paul Kember of KplusK Associates architectural firm. Two of Kember’s uncles worked as draftsmen on 2001, designing and drawing the painstakingly detailed original set. Museum visitors will be able to enter the recreated room in small groups for short periods to experience the surreal environment depicted in the film. For full information about the exhibit visit s.si.edu/2001.
The public will get its first chance to see the installation as part of the museum’s Yuri’s Night celebration, a ticketed, 21-and-over evening event presented with Brightest Young Things Saturday, April 7. For more information:  visit .

A full slate of events and programs exploring the history of the future as seen through the lens and pens of Kubrick and Clarke will be announced in April. 2001: A Space Odyssey premiered April 2, 1968, a short distance from the museum, at Washington, D.C.’s Uptown Theater, and went on to become the highest grossing film of the year. It earned an Academy Award for Best Visual Effects, and it was added to the National Film Registry by the Library of Congress in 1991. In 2015, a collection of Clarke’s papers, tapes and personal items was donated to the museum, including early drafts of 2001.

The National Air and Space Museum’s Steven F. Udvar-Hazy Center is located in Chantilly, Va., near Washington Dulles International Airport. The museum building on the National Mall in Washington, D.C., is located at Sixth Street and Independence Avenue S.W. Both facilities are open daily from 10 a.m. until 5:30 p.m. (closed Dec. 25). Admission is free, but there is a $15 fee for parking before 4 p.m. at the Udvar-Hazy Center. 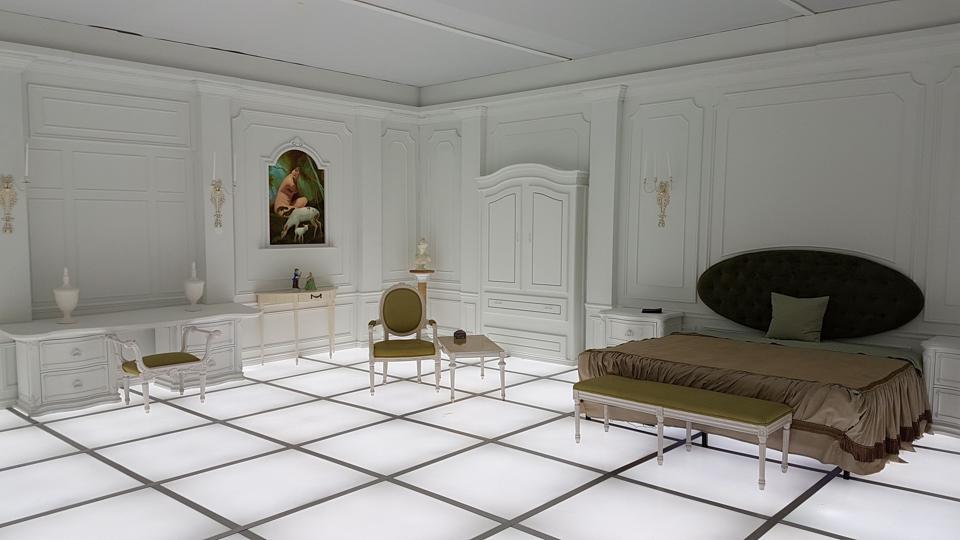 2001: A Space Odyssey is widely regarded as one of the greatest and most influential films ever made. In 1991, it was deemed “culturally, historically, or aesthetically significant” by the United States Library of Congress and selected for preservation in the National Film Registry. Critics’ polls in the 2002 and 2012 editions of Sight & Sound magazine ranked 2001: A Space Odyssey sixth in the top ten films of all time; it also tied for second place in the magazine’s directors’ poll. In 2010, it was named the greatest film of all time by The Moving Arts Film Journal.

Produced and directed by Stanley Kubrick. The screenplay was written by Kubrick and Arthur C. Clarke, and was partially based on Clarke’s short story “The Sentinel”. A novel also called 2001: A Space Odyssey, written concurrently with the screenplay, was published soon after the film was released. The film, which follows a voyage to Jupiter with the sentient computer HAL after the discovery of a mysterious black monolithaffecting human evolution, deals with themes of existentialism, human evolution, technology, artificial intelligence, and the existence of extraterrestrial life. It is noted for its scientifically accurate depiction of spaceflight, pioneering special effects, and ambiguous imagery.

Of Armenian descent, born in Brighton in 1969, Birch began painting at a very early age, he is self taught. He has pursued a versatile career, which has included design, music and sport, but he has continued to paint throughout his life. He has been a resident in Hong Kong since 1997. Birch is also well know as a DJ and graffiti artist, his ‘Naughty Monkey’ work receiving much acclaim in the Hong Kong media. He also part owns Yumla, the most happening bar in Hong Kong.