The celebrated art historian and nun Sister Wendy Beckett has died at the age of 88, it has been announced. In the 1980s and 90s she became one of the most unlikely television stars, the BBC said on their website. Sister Wendy is fondly remembered for her thoughtful descriptions of Contemporary Art and artists such as Lucien Freud, David Hockney, Stanley Spencer and Francis Bacon. As an art historian she covered all subjects of art from sexuality, gender, nudity to social issues.

Born in South Africa, Beckett moved to Edinburgh as a child, joining a convent when she was 16. In 1950 her order sent her to Oxford University, where she lodged in a convent, and was awarded a Congratulatory First Class degree in English literature. 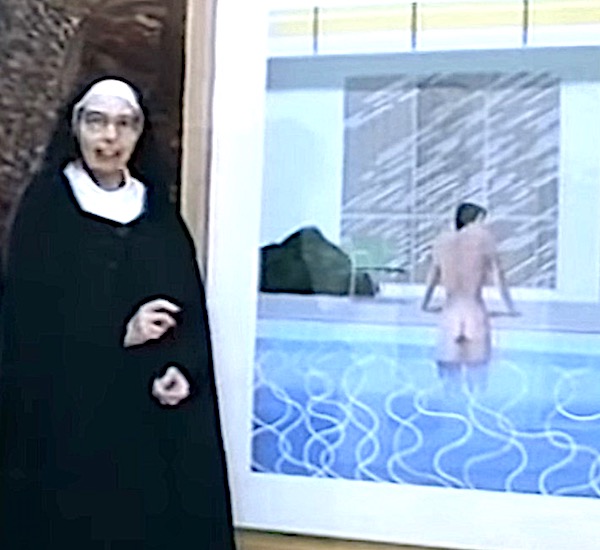 She returned to South Africa in 1954 to teach, but in 1970, with her health deteriorating, the Vatican gave permission for her to pursue a life of solitude and prayer.

After obtaining permission to study art in the 1980s – largely through books and postcard reproductions of the great works obtained from galleries – Sister Wendy decided to write her own book to earn money for her convent.

Her first book Contemporary Women Artists was published in 1988 featuring what she described as a ‘personal choice’ of over 50 artists as ‘there are literally hundreds of gifted and creative women in our contemporary world’. This was followed by more books and articles. In 1991 the BBC commissioned her to present a television documentary on the National Gallery in London.

Sister Wendy’s Odyssey showed the unlikely TV star at her caravan in Norfolk in 1992 in South Africa, Beckett moved to Edinburgh as a child, joining a convent when she was 16.

Sister Wendy was an unconventional figure for a television in the 1980s. Her black nun’s habit and oversized eyeglasses. Critics pointed to her gapped teeth and her way of pronouncing “r” as if it were “w.” Her producers were more impressed by the pithy, ad-lib analyses she could fit neatly into a soundbite, a feat that won her a reputation as “one-take Wendy.”  Dressed in black nun’s habit, Sister Wendy stood in front of paintings, and without script or autocue discussed them to the camera.

In 2007 Beckett was asked, “You’ve spoken out about gay marriage. How do you balance what you believe with what you have sworn to uphold?” She replied:

I believe in loyalty. We should respect our church, but never believe that the church has the last word. The church is saying ‘this’, but I believe that sooner or later ‘this’ will change. ‘This’ is not the mind of our Lord. God is all love. It’s a delicate balancing thing. The Church has changed its position over the years, and because the spirit is with the Church, in the end the Church will always get it right. But in the end. The spirit of the Church is the meaning of love, which hasn’t yet, perhaps, been fully understood.”

Sister Wendy lived in a caravan at a Carmelite convent in Norfolk. She died at 14:30 GMT at the Carmelite Monastery in Quidenham.