Based on the current growth trajectory, the Hiscox Online Art Trade Report, published today, reveals that the value of the online art market could reach $8.37 billion by 2023.

The end-game is still open Industry opinion is divided over how the online art market will develop in the next five years. Four in ten (41%) online platforms believe it will consolidate into only a few global platforms, whereas 30% believe regional and local platforms will dominate. Another 32% believe the online art market will remain category-specific and there will be room for niche players in specific art and collectible segments. The divergence in views highlights that the end-game is still open and that there is plenty to play for.

Robert Read, Head of Art and Private Clients at Hiscox, commented: “The slowing growth in the online art market comes as no surprise. It has now reached a level of maturity where the business is broadly sustainable. The next phase will involve further consolidation as well as resolving the principal stumbling block of price transparency which is essential to attract new buyers. What is clear, is that the talent is there to make it happen, even if the timing remains hard to predict.

“We have looked for the first time this year at cryptocurrencies, cybercrime and the impossible to avoid blockchain and what their effects are on the online art market. This report aims to shed some light on what has so far been an under-researched but increasingly important area of the art market.”

Key findings from the report

Fewer people buy art online, but those that buy, spend more. Roughly four in ten (43%) art buyers bought online in the last 12 months – down from 49% the previous year. Despite this slowdown, the share of online buyers paying, on average, more than $5,000 per fine art object, increased to 25% (up from 21% the previous year). Active online buyers are also purchasing more than in previous years, with 74% making multiple online purchases, up from 65% in 2017.

Price transparency is a key stumbling block. Existing collectors have grown used to a lack of price transparency, but for the vast majority (90%) of new buyers, this is a key consideration that simply isn’t being addressed. 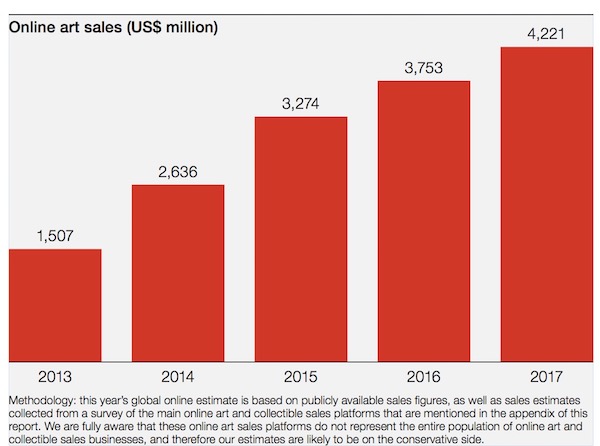 Mobile commerce sees significant growth, and Instagram cements its leading position. The use of a mobile to buy art has risen to 20% in 2018, up from 4% in 2015. This coincides with a gradual decline in the use of tablets. On social media, 63% of buyers cite Instagram as their platform of choice, up from 57% in 2017 and 48% in 2016. With close to 1 billion users, it is becoming an essential tool for the art industry in reaching consumers beyond the existing art market.

Industry consolidation expected to speed up and the online auction market expected to heat up. With a number of new mergers and acquisitions taking place in the last 12 months, 81% of online platforms expect to see a higher rate of consolidation in the future, particularly in the form of ‘vertical mergers’ (companies operating in different parts of the value chain). The online auctions market is expected to see particularly fierce competition, with half of all platforms anticipating this to be the area facing the most intense competition this year. Third-party marketplaces prove instrumental sales tools. Three quarters of galleries used third-party marketplaces to sell art online in 2018 (up from 59% in 2017 and 41% in 2016). One in five (19%) are now using these marketplaces as an outlet for at least half of their online sales (up from 3% in 2017).

Cyber crime hits platforms, galleries and buyer confidence. A worrying 54% of platforms and 28% of galleries have been the target of an attempted cyber attack in the past 12 months, with 10% – 15% of attempts being successful. Perhaps unsurprisingly, four in ten (41%) online art buyers admit to being ‘concerned’ or ‘very concerned’ about cyber crime when buying art online.

Regulatory readiness called into question. Despite its widespread applicability, 41% of galleries and 24% of online platforms surveyed were not aware of the new General Data Protection Regulation (GDPR) and concerning numbers were unprepared for it. Coming into force on 25th May 2018, GDPR will seek to unify data standards and provide greater data protection for EU citizens.

The Hiscox Online Art Trade Report 2018 is the sixth annual report of its kind. The research was carried out by specialist art market analysis firm ArtTactic during January and February 2018. The findings are based on responses from 831 international art buyers surveyed through ArtTactic’s client mailing list, Twitter and Facebook.

To find out more, read the full report at https://www.hiscox.co.uk/online-art-trade-report