The sale of Young Man Holding A Roundel  1470-80 by Sandro Botticelli, which went under the hammer today at Sotheby’s has achieved in excess of $80m ($92.1m plus fees). It was reported that it sold to a Russian buyer on the phone with Lilija Sitnika, a director and senior client liaison on Sotheby’s Russia desk in London.

The painting embodies Sandro Botticelli’s achievements as a portraitist. Praised by the great Italian Renaissance scholar and museum director John Pope Hennessy as “a giant among portraitists,” Botticelli was celebrated in this field, yet precious few examples of his portraits survive today. Were it not for his fashionable tunic, the supremely elegant individual depicted here could have stepped out of one of Botticelli’s mythological or religious paintings, so striking is his resemblance to the beautiful figures that inhabit those works. Innovative in form and at the same time wholly characteristic of Botticelli’s genius, this timeless masterpiece dates to the height of his career. It represents the perfect visual expression of late quattrocento Florentine culture, yet the crisp simplicity of its setting and the lifelike presence of the sitter renders it profoundly modern.

Sotheby’s described the figure as, “An attractive young man, seen at half-length and in three-quarter view, sits in front of a stone window frame. Graceful and poised, he is probably aged to his late teenage years. His long, golden hair, parted at center, frames the delicate features of his face, which is animated by his piercing eyes and finely modeled countenance. His brow is strong, his cheekbones high and softly blushed, his nose distinctive, his chin dimpled, his neck long, and his lips thin and rosy, pursed with an air of self-assurance. The subtle hues of his mauve doublet, closed at the neck and fastened with a row of buttons down his chest, perfectly complement the warmth of his skin, while its tonal gradations define his slender and strong figure.

With a confident pose, the sitter presents one of the picture’s most striking features: a roundel of a bearded saint with his right hand raised. This small gold-ground painting, which dates to fourteenth-century Siena, is a separate work of art altogether. It is set into Botticelli’s panel flush with the surface, held in a painted frame and balanced atop a stone parapet. With both hands, the sitter steadies his prized object as he tips it backward ever so slightly, the light from above casting glints of yellow on the fictive frame. The fingers of his left hand and the shadows they cast on the stone below further add to the work’s illusionism, while the intensity of his gaze, calm expression, and lifelike quality pay eloquent testament to Botticelli’s prodigious skills and innovative mind.” 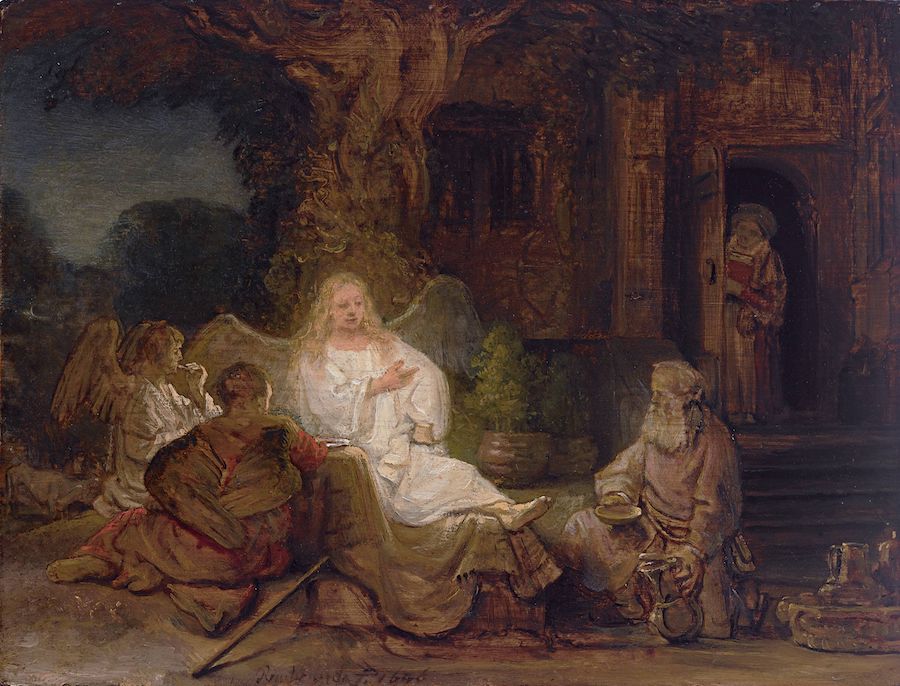 Abraham and the Angels, a rare biblical scene by Rembrandt which was supposed to go under the hammer today was withdrawn from the sale. A reason was not given for the sudden withdrawal.

The small painting measuring 6½ by 8⅜ inches (16 x 21cm) – a profoundly beautiful, gem-like image on a panel from 1646 that stands among the artist’s finest works ever to come to auction. The masterpiece was studied for months by the late British artist, Lucian Freud, a few years before his death, to make an etching inspired by the painting. Freud abandoned the print, remarking that he could not improve upon what Rembrandt had done. Last appearing at auction in London in 1848, when it sold for £64, this small-scale masterpiece was scheduled to hit the block with an estimate of $20-30 million today (Thursday 28th January 2021).

Sotheby’s described the painting as;” a small panel by Rembrandt has remained in private hands for over a century and a half. It is one of the most well-documented paintings by the artist and it has the distinction of never having been doubted in the literature. The renowned Rembrandt scholar, Ernst van de Wetering, has indicated that this painting, with its reliable signature and date, as well as the “unmistakably Rembrandtesque character of its conception and execution,” is unquestionably authentic. Moreover, this is almost certainly the “Abraham with the three angels by Rembrandt” that was described in a transaction between two merchants in Amsterdam in 1647, the year after the painting had been executed.

After trading hands in 1647, the painting then appears in the collection of one of Rembrandt’s most accomplished pupils, Ferdinand Bol. It is subsequently recorded in the collection of Jan Six, (1617-1700), a descendant of the well-known merchant of the same name who was a friend and patron of Rembrandt. In the early 19th century it was owned by the famous American expatriate artist, Benjamin West. After passing through several prestigious hands, it was acquired for the renowned Pannwitz Collection of Dutch masters, where it remained for over 75 years.

Rembrandt is known for his biblical scenes, but only 29 of the more than 300 paintings he executed depict scenes drawn from the Old Testament. This panel reveals the moment when Abraham, who generously offered nourishment to three complete strangers, recognizes that two of them are in fact angels, and that the third is the Lord himself, indicated here by a luminescent figure of an angel who is the principal source of light in the scene. We are witnessing the precise instant when God reveals himself to Abraham and prophesizes that his elderly wife Sarah will bear him a son within a year. This son was to become Isaac, patriarch of the Israelites and according to Matthew (1: 1-17) a link in the lineage from David and Abraham to Christ. Abraham is also one of the most important prophets in Islam and is seen as a father of the Muslim people through his first child, Ishmael.”