Three hundred Models wearing only white body paint have posed in a desert landscape in southern Israel as part of the latest project by the American artist Spencer Tunick. The 54-year-old photographer is highlighting the shrinking Dead Sea, a byproduct of climate change.

Ten years ago, Tunick focused on the Dead Sea, the world-renowned World Heritage site. “I will once more capture the quickly disappearing natural wonder against the backdrop of hundreds of nude people”, Tunic said.

“Being back in Israel is surreal in many ways,” said Tunick. “Aside from the obvious – coronavirus and the travel bans and restrictions over the past 18 or so months, so much has changed since I have been here last.
“One of the primary aims of my installation photographs is to raise awareness of the devastation that has befallen the areas of the Dead Sea that I photographed in 2011. The original installation site at Metzuke Dragot has all but disappeared and is no longer accessible due to dangerous sinkholes,” he stated.

“For me, it will be a gratifying experience, and I hope it is for the participants and everyone who gets to view and appreciate the finished framed photographic works. Yet, it comes with the sad realization of the disastrous consequences of overexploiting natural resources without measures toward restoration,” Tunick continued.
“With my works at the Dead Sea, I attempt to poetically visually create pushback against the loss of a natural wonder of the world. The change will not happen in a vacuum; sometimes it takes art to spread the word.”

Artist Spencer Tunick has been documenting the live nude figure in public, with photography and video, since 1992. Since 1994, he has organized over 100 temporary site-related installations that encompass dozens, hundreds or thousands of volunteers, and his photographs are records of these events. The individuals en masse, without their clothing, grouped together, metamorphose into a new shape. The bodies extend into and upon the landscape like a substance. Tunick stages scenes in which the battle of nature against culture is played out against various backdrops, from civic center to desert sandstorm, humans are returned to a pre-industrial, pre-everything state of existence. These group masses, which do not underscore sexuality, often become abstractions that challenge or reconfigure one’s views of nudity and privacy. The work also refers to the complex issue of presenting art in permanent or temporary public spaces. 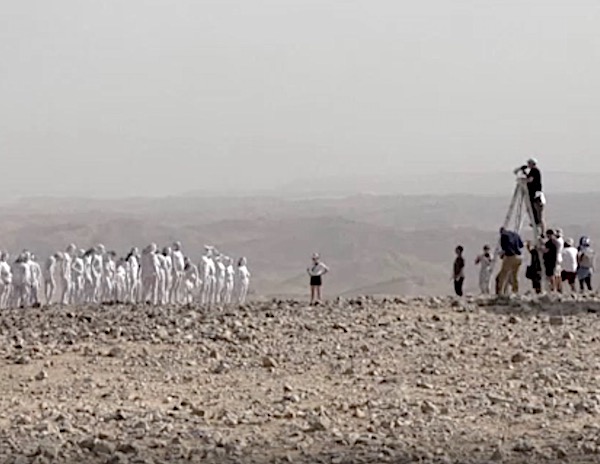 Spencer Tunick’s body of work may come to help define or at least clarify the social, political and legal issues surrounding art in the public sphere. Since 1994, Tunick has been arrested 5 times while attempting to work outdoors, 3 times in New York City. Soon after his third New York arrest in Times Square and determined to create his work on the streets, the artist filed a Federal Civil Rights Law Suit against the city to protect his participants and himself from future arrests. In May 2000, the Second US district court sided with Tunick, recognizing that his work was protected by the First Amendment of the US Constitution. On June 3 of the same year, in response to the city’s final appeal made to Justice Ruth Bader Ginsburg and the court at large, the US Supreme Court also ruled in favor of Tunick by remanding the case back down, allowing the lower court decision to stand and the artist to freely organize his work on New York City streets.

Spencer could not make his art without the brave generosity of the participants, whom he often refers to as urban adventurers. He is eternally grateful for their leap of faith wanting to be in his art. Near the end of installations for the final setups he sometimes separates the participants into smaller groups to make additional works: sometimes by sex, sometimes by age, and even once by hair color. However, no one is ever excluded from an installation because of the color of their skin, ethnicity, gender identiy, sex, race, religion, or political affiliation. If you can make it to an installation you can participate, unless of course there are space limitations. In exchange for taking part participants receive a limited edition print from the installation.