A painting by Sir Stanley Spencer titled Cookham from Englefield, that was stolen five years ago from the Stanley Spencer Gallery in Berkshire has been uncovered in a raid on a drug dealer’s home in Kingston- Upon-Thames. The work of art valued at over £1m has now been returned to the gallery, police have revealed.

The robbery took place when a window was smashed at the Stanley Spencer Gallery in High Street, Cookham at 01:00 BST on a Sunday evening in 2012. The thief took the painting (dated 1948) by the artist once dubbed ‘the divine fool of British art’. The painting is privately owned and had been loaned to the gallery. 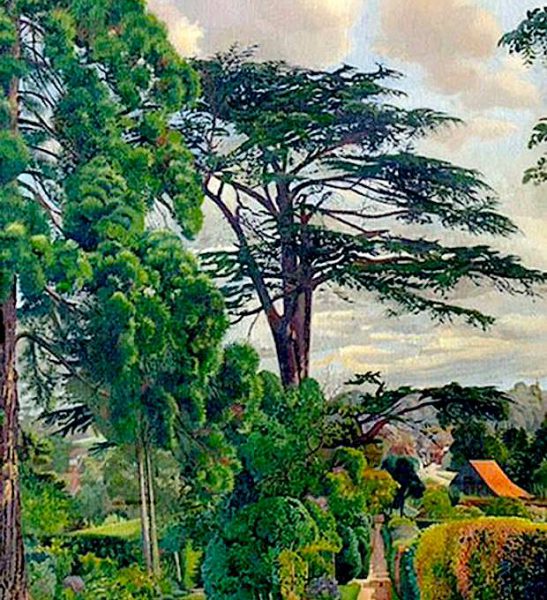 It is now suspected to have been used as collateral by the gang. Harry Fisher, 28, was arrested on June 15, after police found a kilogram of cocaine and £30,000 in cash in his Mercedes. Fisher’s flat in Kingston-upon-Thames, west London, was then raided by officers who discovered the painting along with three kilograms of cocaine and 15,000 ecstasy tablets. After a search of Mr Fisher’s family home in Fulham, more Class A drugs were uncovered, making a total street value of £450,000, and £40,000 in cash.

A spokesperson from The Stanley Spencer Gallery said, “volunteers are immensely grateful to the various police sections who have contributed to the recovery of this remarkable painting which was stolen from us more than five years ago.”

Sir Stanley Spencer CBE RA (30 June 1891 – 14 December 1959) was an English painter. Shortly after leaving the Slade School of Art, Spencer became well known for his paintings depicting Biblical scenes occurring as if in Cookham, the small village beside the River Thames where he was born and spent much of his life. Spencer referred to Cookham as “a village in Heaven”, and in his biblical scenes, fellow-villagers are shown as their Gospel counterparts. Spencer was skilled at organising multi-figure compositions such as in his large paintings for the Sandham Memorial Chapel and the Shipbuilding on the Clyde series, the former being a World War One memorial while the latter was a commission for the War Artists’ Advisory Committee during World War Two. As his career progressed, Spencer often produced landscapes for commercial necessity and the intensity of his early visionary years diminished somewhat while elements of eccentricity came more to the fore. Although his compositions became more claustrophobic and his use of colour less vivid he maintained an attention to detail in his paintings akin to that of the Pre-Raphaelites.