The Danish collective SUPERFLEX has unveiled their highly anticipated Tate Modern Turbine Hall commission.It consists of a large-scale interactive installation titled One Two Three Swing! The work extends beyond the gallery walls. An orange line connecting dozens of three-seated swings weaves through the Turbine Hall, emerging onto the landscape outside Tate Modern where it will activate the space and continue to extend over time. Conceived as an assembly line for collective movement, the work invites audiences to combat social apathy through collaborative action, joining together on the count of three – One Two Three Swing! This is the third annual Hyundai Commission, a series of site-specific works created for the Turbine Hall by renowned international artists, as part of the partnership between Tate and Hyundai Motor. 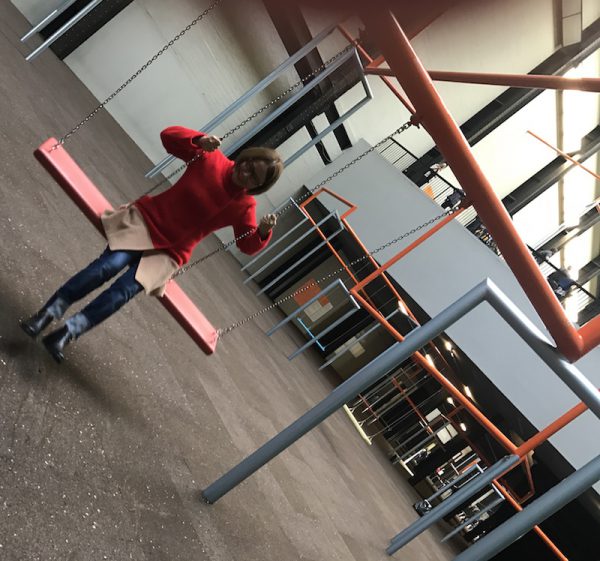 One Two Three Swing! challenges society’s apathy towards the political, environmental and economic crises of our age. The installation engages with the Turbine Hall’s industrial history as a site for the generation of energy and its new role as an open space in the heart of an art gallery, which the work now connects to London’s network of public spaces. In dialogue with the surrounding architecture – the sloping entrance, the east end of the hall, and the bridge on level 1 – the installation is experienced in three states: apathy, production, and movement. The state of apathy comprises a large pendulum suspended by a 20-metre cable from the ceiling and swinging above a 770 square metre carpet in a colour scheme inspired by British currency. Occupying the far end of the hall is the state of production, a factory station where swing seats are assembled, stamped and stored prior to distribution and use. Emerging from the state of production, an orange line formed of sets of interconnected, three-seated swings invite and frame the movements of users.

The act of resting in contemplation, with the hypnotic pendulum swinging above, is set in contrast to the liberating, collaborative experience of singing together. Over time the work will evolve as the orange line continues to grow and new swings are added, spreading outside Tate Modern, into the urban landscape of London and potentially beyond into the wider world. The work explores the potential of energy generated by social movements, drawing unexpected connections within, between, and beyond institutions, and proposing new uses for urban public space.

SUPERFLEX was founded in 1993 by Jakob Fenger, Bjørnstjerne Christiansen and Rasmus Nielsen. With a diverse and complex practice, SUPERFLEX challenges the role of the artist in contemporary society and explores the nature of globalisation and systems of power. SUPERFLEX has gained international recognition for projects and solo exhibitions around the world, including Kunsthalle Basel, Basel; the Mori Museum, Tokyo; Van AbbeMuseum, Eindhoven; South London Gallery, London and the 21st Century Museum of Contemporary Art, Kanazawa. The group has participated in international biennials such as the Gwangju Biennale, Istanbul Biennial, São Paulo Biennial, Shanghai Biennial, and in the Utopia Station at the Venice Biennale. SUPERFLEX is represented in several public art institutions, such as MoMA, New York; Hirshhorn Museum, Washington; Louisiana Museum of Modern Art, Copenhagen; The Hammer, Los Angeles; Kunsthaus Zurich, Zurich; Museum Boijmans Van Beuningen, Rotterdam and Colección Jumex, Mexico City.