Tate has backtracked under public pressure and will now remove the existing Sackler names from two of its London museums.

The disgraced philanthropic Sackler family were the manufacturers of the highly addictive opioid drug OxyContin, which they marketed through Purdue Pharma, a family-owned private company. Over 500,000 deaths have been recorded in the US alone from opioid drugs. The Sacklers have denied all charges and continue to live a lavish lifestyle from the $13bn family fortune, much of it amassed through their immoral sale of opioid pharmaceuticals. The Sacklers are known to have misled a network of doctors to maximise their profits.

In 2019 the Tate stated that they would not remove the Sackler name from its galleries. “The Sackler family has given generously to Tate in the past, as they have to a large number of UK arts institutions. Originally Tate stated, “We do not intend to remove references to this historical philanthropy.” This decision has now been reversed.

The artist/activist Nan Goldin brought the opioid crisis to the public’s attention after becoming addicted to the drug after it was prescribed for an injury. Her organisation Sackler Pain has successfully lobbied to remove the discredited family name from the Metropolitan Museum in NY, The Louvre in Paris and now the Tate.

Picasso’s iconic Guernica tapestry has been restored by conservators and rehung outside the United Nations Security Council Chamber; it was announced by Nelson A. Rockefeller, Jr., whose family has been the longtime steward of the tapestry.

“I am delighted and deeply grateful, along with my family, for the careful stewardship the Secretary-General and the broader United Nations team has provided for the Guernica tapestry. The Guernica tapestry with its probing symbolism – its depiction of horrific aspects of human nature – wrestles with the cruelty, darkness, and also a seed of hope within humanity,” said Mr Rockefeller. “The Guernica tapestry is meant to be experienced and interpreted, with Picasso refusing to share its message when asked. I am grateful that the tapestry will be able to continue to reach a broader segment of the world’s population and magnify its ability to touch lives and educate.”

UN Secretary-General António Guterres stated in a Dec. 15, 2021, letter to Mr Rockefeller: “This is most welcome news as we end a difficult year of global hardship and strife. The Guernica tapestry speaks to the world about the urgent need to advance international peace and security. We are honoured to serve as careful stewards of this one-of-a-kind iconic work – as we draw inspiration from its message.”

25-foot tapestry replica of Pablo Picasso’s anti-war painting “Guernica” was removed from the United Nations by its owner a year ago after more than three decades there, diplomats mourned the abrupt exit of an artwork that poignantly reflected the organisation’s core purpose.

Rockefeller and the National Trust for Historic Preservation said in a statement, Under a long-term loan to the U.N., Rockefeller is the steward of the tapestry and that it would be gifted to the National Trust, which will “handle coordinating its display at other venues in the United States and across the globe.” 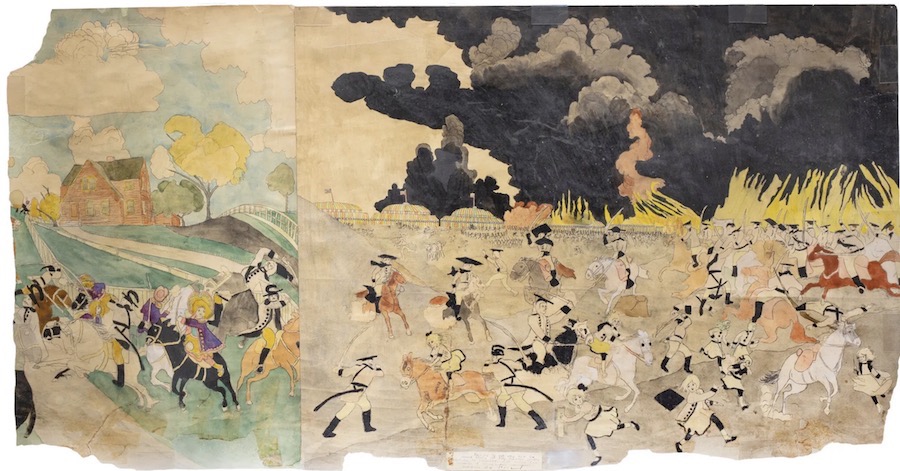 When the reclusive artist Henry Darger died in 1973, with no known relatives, his landlords, Nathan and Kiyoko Lerner, inherited the entire contents of his apartment. As a result, they have controlled his estate, marketing his work and building up an international reputation for this ‘Outsider Artist’. Now distant relatives of the artist are challenging their stewardship in court.

Henry Darger died in Chicago in 1973, at age 81. His studio was stuffed with artworks, mainly compiled into four volumes of oversized sketchbooks containing 15,000 works.
Relatives have filed a “petition for determining heirship” in an Illinois probate court. A hearing in Cook County is scheduled for Feb. 23.

“We’re asserting the rights of the family — taking any action to restore his legacy,” said Christen Sadowski, a Darger relative. “To understand that someone took what was his life’s work and has capitalised on it — it’s about righting a wrong.”

The dispute focuses on how legacies and copyrights are handled after artists’ death who lived largely solitary lives. In this case, a 2019 article in a Northwestern University law journal questioned whether the landlords were correct in assuming the rights under Illinois and federal law.

Henry Darger was born in 1892 in Chicago, Illinois. He led a very isolated life and had no close relatives to speak of. After being orphaned and institutionalised as a child, being subject to the horrific traumas that came with that, he became reclusive, withdrawn and retreated from the world. As Darger grew into adulthood, he found work as a hospital janitor and dishwasher. Work by the artist now sells for up to $800,000 at auction.