Tate has published their Annual Report for 2016/17. The opening of the Blavatnik Building in June 2016 firmly established Tate Modern as one of the world’s greatest buildings for art in the twenty-first century, and the newly opened spaces attracted over a million visitors in the first month and a record 6.4 million visitors over the year. The announcement of the first woman to be appointed Director of Tate, Maria Balshaw, was made in January 2017. Formerly Director of the Whitworth (University of Manchester) and Manchester City Galleries, she succeeded Nicholas Serota who stepped down from the role in May.

The collection displays at Tate Modern were comprehensively rehung to reflect ever broader geographies and to redress the gender balance, with work by more than 300 artists from over 50 countries.

Tate recorded outstanding visitor figures overall – 8.4 million across its four sites – the most in a single year. At Tate Britain, David Hockney was the second most popular show in Tate’s history after Matisse: The Cut-Outs, drawing with 478,082 visitors. 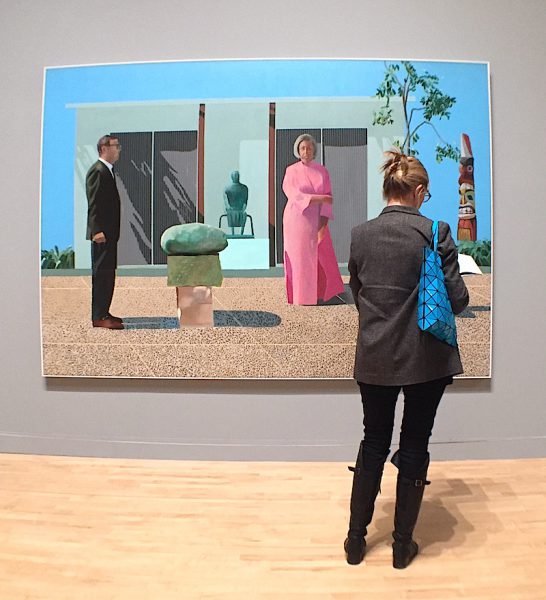 David Hockney was Tate’s Most Popular Exhibition In 2016/2017

Tate is broadening its audiences by looking at the value of art to society. Central to this has been the launch of a pioneering learning project at Tate Modern and Tate Liverpool: Tate Exchange, the first such project on this ambitious scale anywhere in the world. Working with more than 60 institutions, many of them not directly related to the arts, and inviting the public to contribute to events and workshops, this attracted over 230,000 people in its first year, many of whom had never been to an art gallery.

Circuit, a four-year network for young people supported by Paul Hamlyn Foundation, concluded in 2017 with a substantial and lasting legacy. Led by Tate and involving six partner galleries in the UK, the project is set to influence the way museums work with 15 to 25 year olds in the future, providing a rich seam of research illuminated by the 175,000 people who took part. Tate’s relationship with this age group through its 150 strong Tate Collectives group, who programme their own displays, evening events and activities, has drawn people in who are now building their own careers in the arts and the creative industries.

Emphasis was placed this year on ramping up the digital offer. Two new interactive digital spaces were opened in the Blavatnik Building and a new mobile phone app was launched to inspire the public on their gallery journey, finding the nearest places to eat, shop and hang out. These projects were made possible through Tate’s partnership with Bloomberg Philanthropies. The long-term Bloomberg strand, the TateShots series of films, celebrated its tenth anniversary in 2017. Almost 500 short films have been published, attracting millions of views online. Film-making has taken the organisation across the globe, this year to Bangalore, Buenos Aires and Shanghai, among others, to document leading international artists in their studios.

Sharing the collection is a core part of Tate activity and in 2016/17 the gallery lent to many more venues overall, with the number internationally up by almost 30 per cent. In total 1,079 works went to 233 venues worldwide across 29 countries. For the first time, works were sent to Singapore and Cyprus. Many of Tate’s specially curated exhibitions of collection works were presented to audiences on the other side of the world. Nude: Art from the Tate Collection went to Sydney and a second iteration of this went to Auckland. An exhibition of works by Freud, Bacon and others was lent to the J. Paul Getty Museum in Los Angeles where it attracted over 167,000 visitors.

In the UK, 513 works were lent to 113 venues. Building on the success of the tour of Constable’s Great Salisburypainting, Tate began a new programme with the exquisite, recently acquired oil painting by William Stott of Oldham, Le Passeur (The Ferryman) 1881. This work will go to venues in Scotland, England and Wales supported by National Lottery players through the Heritage Lottery Fund, Art Fund and the John Ellerman Foundation.

Work has almost concluded on the major capital project at Tate St Ives which will fully open in October 2017. The gallery attracts over 200,000 visitors a year and brings £11 million to the local economy so the improved facilities with spectacular spaces for larger-scale, temporary exhibitions will significantly enhance the offer for visitors.

The full report can be viewed here