Today (8th March) is International Women’s Day, it’s also the public opening of the new Picasso exhibition at Tate Modern. For those of you familiar with Picasso and his self-mythologised monster; you may need to read that sentence again. Tate Modern will be opening an exhibition of one of the most famously misogynistic, abusive, worst examples of toxic masculinity the art world may have ever seen…on International Women’s Day. A day intended to celebrate women, their achievements and vital role in our world history! This is more than a faux pas, this is a direct insult to us all, men and women, from an institution with a very relaxed attitude to the gender pay gap.

Picasso had seven female muses who were crucial to his work and artistic exploration. These women mostly go un-credited for their role in influencing or inspiring his paintings. In fact Picasso treated two of these women so badly that they were driven to suicide while the others suffered at the hands of his psychological torture. The Tate proudly boasts on the website ‘Three of his extraordinary paintings featuring his lover Marie-Therese Walter are shown together for the first time…’ The centre piece of this misplaced show is that of a Women driven to take her own life at the hands of her abuser. (On International Women’s Day.) The Tate go on to state that the ‘myths around Picasso will be stripped away to reveal the man and the artist in his full complexity and richness’. Calling violent misogyny ‘complexity and richness’ is perhaps the most patriarchal reduction of it I have ever heard. It is somewhat bizarre to have an exhibition called ‘Love, Fame, Tragedy and have such little focus on the horrific and tragic nature of his relationships, the same tragedies that were in turn directly responsible for each era of his work. Tragedies that belonged to the women he inflicted his terror on. 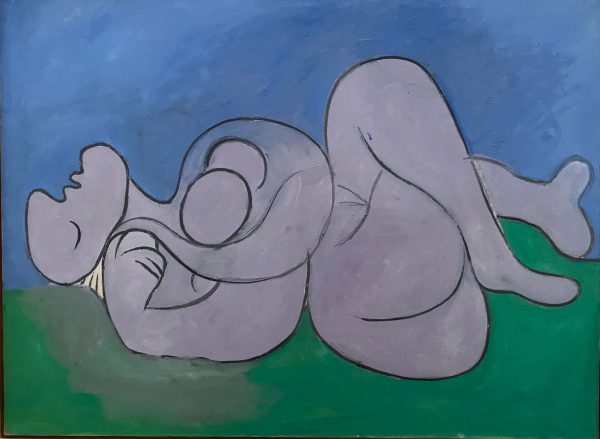 His series of works ‘Minotaurs’ is revered as Picasso demonstrating his intensity and vulnerability ultimately pulling in the sympathies of his enthusiasts. In fact, these images are a mythologized version of himself in various rape scenarios in frenzies of self-glorification. They are certainly horrifically and violently romanticizing the tragedy surrounding Marie-Therese Walter who has become ill at the time these paintings were created. That’s right he lauded himself as a Monster raping women at their most vulnerable and the full exhibition will open tomorrow on International Women’s day. Picasso famously described painting as “just another form of keeping a diary” which is a horrific account of his mistreatment of the women in his life. The women that he bled dry emotionally and used their emotions as stepping stones to further his own creative output. Picasso in fact claimed Women are either Goddesses or Doormats, and described one of them as a Machine of Suffering (The Weeping Woman).

The institutionalised normalisation of the horrendous nature of many of Picasso’s works has perpetuated through the decades. Critics and galleries alike keep the art separate from the artists. The same is true of Woody Allen, Tarantino and perhaps Weinstein. These men are relinquished of all responsibility for their actions by honey-glazing it in talents many women have in abundance. To exhibit this work so blatantly on a day intended to celebrate women is aggressive. In fact, the only way for the Tate to relinquish them of such an abhorrent act of sexism would be to remain shut on International Women’s Day as a mark of respect to the women Picasso abused, to all women.

We must also give an editorial voice to the toxicity that the Father of Modern Art passed onto modern male artists who have endured their own versions of this toxicity and inherited image of The Macho Father of Modern Art, Tragedy and Toxicity. Acknowledgement of this toxic voice throughout history, art history and current history will allow society to begin repairing. The British Museum was forced to address its colonialist passed when it exhibited aboriginal body parts as part of the exhibition; Indigenous Australia. Although the Museum still went ahead with the exhibition, at the very least, it acknowledged how it had come by these items and the role it played in obtaining them. By giving a voice to these threads, talking about them and acknowledging their presence goes some way in moving forward, albeit just a little. It seems backwards and confusing that the Tate has failed to acknowledge such a relevant story only made worse by opening on International Women’s Day. The focus of this exhibition could have been something very different indeed. The Tate could have potentially been an example here, but instead, they have ignored the relevance of such a topic.
I am deeply disappointed in The Tate and the Exhibition not least because there are two amazing women at the top. I love the Tate, I also don’t entirely hate Picasso’s work, but I certainly do loathe the nature of it. I also think it is distasteful and disrespectful to ignore the violence and pain these women went through on such a historical day. Asking us not to call this out, not to mention it because The Tate is such a famed institution is akin to asking us to submit, and that is a problem.