TEFAF Maastricht the world’s leading fine art and antiques Fair has reported buoyant sales with brisk activity during the opening days of the event. This is yet again a testament to the strength of the global art market in 2017. Over 10,000 collectors and institutional representatives visited the Fair during preview day, Thursday 9th March, acquiring works for both private and public collections. This is in addition to over 7,000 visitors on the first public day of the Fair, Friday 10th March. TEFAF Maastricht continues at the MECC, Maastricht until Sunday 19th March 2017.

The exceptional objects presented by the 2017 exhibitors drew sales from the first minutes of the Fair. Appetite for Old Master works was apparent from the scope of sales reported in TEFAF Paintings and TEFAF Antiques. Colnaghi (Stand 306) sold an important rediscovered carved and polychrome wood sculpture, Saint Francis of Assisi, by Pedro De Mena y Medrano (1628- 1688) within the opening ten minutes of the Fair for a seven-figure sum to a private European foundation. Many sales were reported to American collectors and institutions, including a beautiful depiction of the Doge’s Palace in Venice by Federico Moja (1802-1885) by new exhibitor Salamon & C (Stand 375) for €85,000, which went to a private collection in America. Elsewhere in TEFAF Paintings, Agnews (Stand 346) sold Portrait of a member of the Guild of St. Sebastian, three-quarter length, Antwerp School, c.1645 and Galerie Canesso (Stand 382) sold one of their highlights, Self-Portrait with a Turban, by Wallerant Vaillant (1623-177).

Penelope Curtis, director of the Calouste Gulbenkian Museum, Lisbon, has been invited to curate the 2017 edition of TEFAF Curated.

The decorative arts is the largest of the collecting categories at TEFAF Maastricht and a variety of works were acquired. Daniel Katz Ltd (Stand 100) sold Self-Portrait, 1962 by Claudio Bravo (1936-2011) for £195,000 to a private UK collector, and Lamentation, 16th century, gilt and polychromed wood, attributed to Arnao de Bruselas (1515-1564) has gone to a UK museum. In addition, John Endlich Antiquaries (Stand 235) sold the dolls’ house, which had an asking price of €1.8 million, to a private American collector. The piece will go on display at the Museum of Fine Arts, Boston. Asian works continued to be popular – part of Sydney L. Moss (Stand 268) exhibit was a collection of rare netsuke works and in the opening days of the Fair six works had been sold, all to private collectors.

Both antique and contemporary ceramics continue to be popular with collectors as sales confirmed. Aronson Antiquairs (Stand 106) sold an extraordinary blue and white baluster- shaped flower vase, Delft c.1700, which is attributed to De Witte Ster (The White Star) factory, for €250,000. Adrian Sassoon (Stand 269) sold a set of 5 blue and white vases by Robin Best (b.1953), to a museum for in the region of €40,000.  The contemporary and antique jewellery offering at TEFAF Maastricht is very strong and Hancocks (Stand 243) reported numerous sales throughout the preview day of the Fair, including the sale of the Edwardian tiara which belonged to Lady Delia Spencer, the great-aunt of Princess Diana. 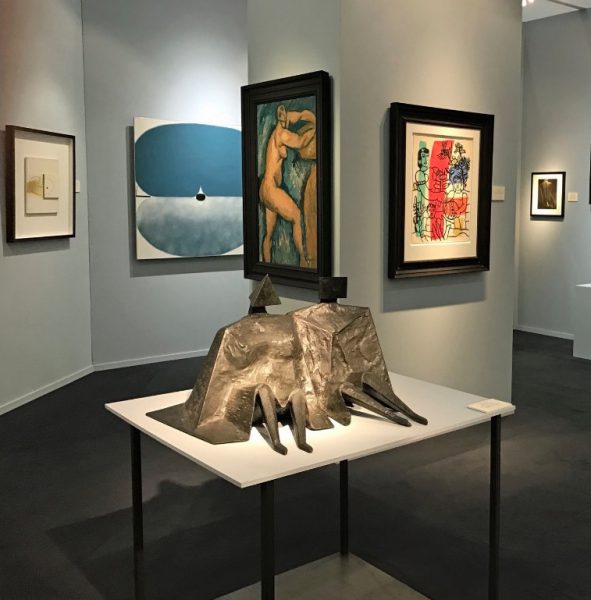 Dr Jörn Günther Rare Books (Stand 109) sold a compilation of chronicles made for Willem van Bergh, c.1455, and housed in the Huis Bergh, which is now a museum. The museum was delighted to have the opportunity to buy back the work for their collection. The object is extremely important as it is the only known manuscript from the region in the regional language. Another work on paper, this time from the 20th-century, was sold in TEFAF Paper –the Study of Sir Winston Churchill, by Graham Sutherland, OM (1903-1980) sold for close to the asking price of €100,000 to a private European collector at Christopher Kingzett (Stand 701).

TEFAF Ancient Art offered a selection of highlights for visitors and sales were reported throughout the section. Merrin Gallery (Stand 430) had interest from three buyers for a Phrygian Helmet, 4th century BC, which sold to one for a six-figure sum. In addition, Galerie Kevorkian (Stand 432), reported that most of their stand highlights had been sold to private collectors except one work, which has gone to a public institution.

Very good sales were reported throughout TEFAF Design, including Jason Jacques who sold two works by Rick Owens, Stag Bench Right and Stag Bench Left, both 2016 and crafted from plywood and moose antler, for €20,000 each, in addition to Two Headed Bunny and Kneeling Moss Girl, 2017, by Kim Simonsson for US$25,000. Gallery Bel Etage (Stand 606) also had a very good start to the Fair selling a set of tableware, designed by Koloman Moser, 1900, and executed by E. Bakalowits Söhne, to an Arabian client.

The growing offering of Tribal Art has been well received by visitors with TEFAF Showcase exhibitor, Tribal Art Classics (Stand S4), selling Tabwa figure, late 19th-century, wood, from the Democratic Republic of Congo, which had interest from multiple buyers and it eventually went to an English private collector. In addition, Lullo Pampoulides Fine Art (Stand S1) sold the oldest work of the Fair, a 155 million-year-old Camarasaurus Dorsal Vertebra, Upper Jurassic, Salt and Pepper, Quarry, which comes from Colorado, USA.