TEFAF Maastricht has cancelled the 2021 edition of their prestigious fair due to the logistical uncertainties of exhibitors. After careful consideration of current global circumstances, The European Fine Art Foundation (TEFAF) has decided to cancel the in-person component of TEFAF Maastricht 2021, initially slated for September 11 – 19, 2021. An online replacement will go ahead in September.

TEFAF is dedicated to strengthening the success of its community of exhibitors and collectors with this fall’s digital fair, which will feature the theme “The Art of Collecting.” No other art fair can celebrate the collecting experience quite like TEFAF – Across categories, across time, and through today’s most exciting exhibitors, TEFAF’s selection of over 7,000 years of art history is unmatched. The concept of “The Art of Collecting” will touch every facet of TEFAF Online 2021, from how users navigate the site to the narratives presented by each of the dealers.

Exhibitors will display up to three artworks, which will tell a single story of historical, personal, or artistic significance. The fair will also feature TEFAF Collection Pages, which will sort objects, not by exhibitor, but by medium, period, and section, in addition to creative categories. Together with a culturally rich itinerary, these developments to the digital fair foster an intimate and educational experience for seasoned collectors and new buyers alike.

“TEFAF is focused on gathering our community of dealers, collectors, and vendors for our signature fair experience in a physical setting as soon as circumstances allow,” said Hidde van Seggelen, TEFAF Chairman. “In the meantime, we are excited to present a new and improved edition of TEFAF Online this September, and look forward to coming together in Maastricht for TEFAF’s 35th anniversary next March.”

TEFAF, established in 1988, Maastricht, The Netherlands, stands for The European Fine Art Foundation. It is a not-for-profit organization that champions expertise, scholarship and variety in the global art community and is highly respected for its meticulous vetting standards. TEFAF fairs take place in Maastricht and New York. Proven by the exhibitors selected for its fairs, TEFAF acts as an expert guide for private and institutional collectors and inspires lovers and buyers of art worldwide. A Board of Trustees governs TEFAF (BoT), consisting of 21 members from the art and antique community, the majority of whom are TEFAF exhibitors and guided by an Executive Committee (EC), composed of seven members appointed by the BoT. www.tefaf.com 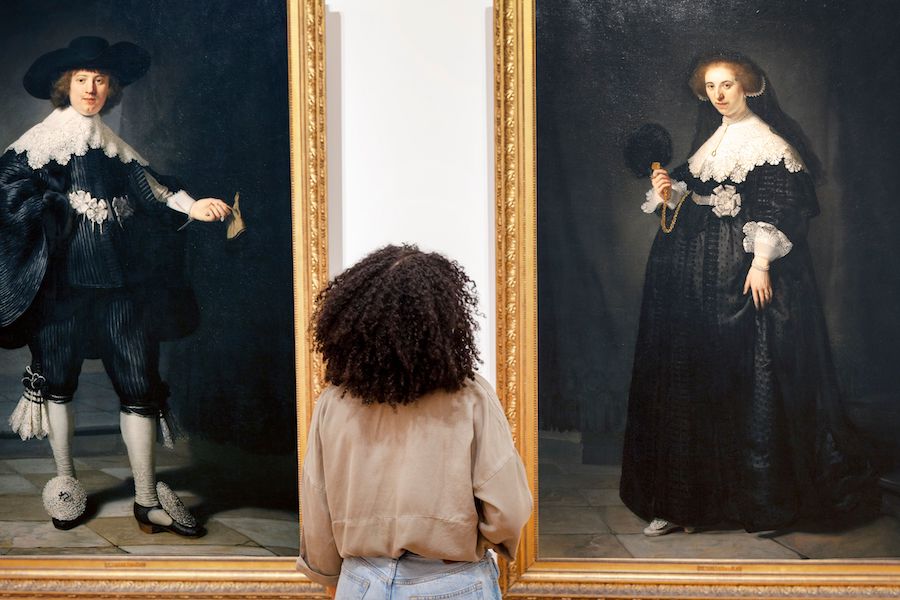 Rijksmuseum Examines Their Dutch Slavery Past In Art

Slavery is the first-ever major exhibition dedicated to the subject of slavery by Rijksmuseum. Slavery is inextricably bound up with Dutch history. The first time stories of the slave trade across the Atlantic and the Indian Oceans are told together in one exhibition in the Netherlands.

The Slavery exhibition presents ten true stories. Ten personal stories about enslaved people and slave owners, people who resisted, and people brought to the Netherlands in slavery. What were their lives like? What was their attitude to the system of slavery? Were they able to make their own decisions?

Taco Dibbits, General Director Rijksmuseum: The Rijksmuseum is the national museum of art and history. Slavery is an integral part of our history. By delving into it, we can form a complete picture of our history and a better understanding of today’s society.

During the 250-year colonial period, people were made into property and objects to be recorded in accounts. The exhibition highlights the lives of ten people who lived at the time. They each tell their own story: about living in slavery or taking advantage of it, about resistance and – ultimately – freedom.

They include enslaved people and slaveholders and individuals who broke the shackles of slavery, an African servant in the Netherlands, and an Amsterdam sugar industrialist. An audio tour leads visitors through these widely differing lives. Among the narrators are Joy Delima, Remy Bonjasky and Anastacia Larmonie, who connect with one of the ten people through their background.

The exhibition includes objects, paintings and unique archival documents, and visitors will hear oral sources, poems and music. To tell a complete story, there will be exhibits that have never been shown in the Rijksmuseum before, such as objects cherished by people in slavery and tools used on plantations.

Once visitors have seen the exhibition, artists David Bade and Tirzo Martha from Instituto Buena Bista in Curaçao invites visitors to process their impressions in new, own artworks, entitled Look at me now.

The exhibition spans the Dutch colonial period from the 17th to the 19th century. It features the trans-Atlantic slavery in Suriname, Brazil and the Caribbean, and the part played by the Dutch West India Company (WIC); and Dutch colonial slavery in South Africa and Asia, where the Dutch East India Company (VOC) operated. The effects of the system in the Netherlands during the period are also highlighted. As a whole, it offers a geographically broad and, at the same time, specifically Dutch view, which has never been seen before in a national museum. 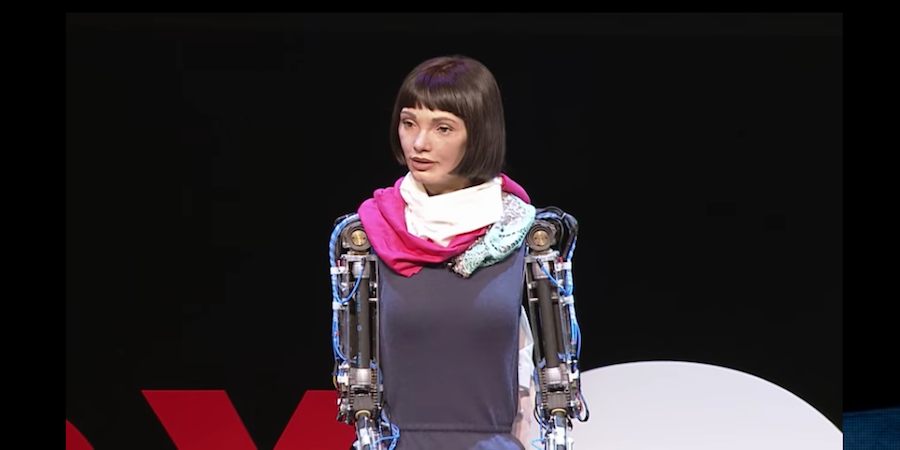 The world’s first ultra-realistic robot artist, Ai-Da, is the subject of a new exhibition at the Design Museum in London, from 18 May – 31 August 2021.

The Design Museum in London has a new artist in residence and it’s not human. Ai-Da Lovelace is a life-size humanoid robot named after the pioneering female scientist and mathematician, not to be confused with Linda Lovelace the iconic 1970s adult film star… . Completed in 2019, Ai-Da is designed to create art and uses AI algorithms to produce works that comment on the current and future uses of artificial intelligence.

The exhibition Ai-Da: Portrait of the Robot turns the subject of self-portraiture on its head and questions the nature of human identity and creativity. Ai-Da’s work breaks new ground creating ‘selfies’ of someone who doesn’t have a self.

The exhibition has two world-first innovations: it presents three large scale self-portraits, the first-ever made by an ultra-realistic robot. It also has the world’s first AI font devised by an artist robot to signify language produced by AI language models, raising discussion and ethical questions on the increasing lack of distinguishability between AI-generated text and human-created text.

From 24 May – 6 July 2021, Ai-Da will complete an artist residency at the iconic Porthmeor Studios in St Ives, Cornwall. Working from the former studio of modernist painter Ben Nicholson Ai-Da will create new work inspired by two key figures of the St Ives School, Naum Gabo and Barbara Hepworth, exploring their artistic approaches and ideas about the use of art for a better future. Using a specially developed AI programme, Ai-Da will produce striking linear images from nylon reminiscent of Gabo’s taught line, like Ai-Da used new technologies and materials. In the spirit of Barbara Hepworth, Ai-Da will also travel out into the Cornish landscape to capture images of the ancient stone sites that hold so much history of the area, which will form the basis of a series of performance films and remarkable granite and tin sculptures. During her residency, Ai-Da will share the Porthmeor Studio space with attendees of the 2021 G7 summit, taking place in St Ives from 11 – 13 June.

There are many examples in the history of the art of artists using the latest technology, from Van Eyck and his pioneering use of oil paints to Naum Gabo and plastics, and David Hockney moving from photocopier to iPad as the technology advanced. As a contemporary artist, Ai-Da’s use of AI fits well into this continuum.

Ai-Da is a composite persona containing a wide range of AI and computer programmes, robotics, silicone, and human influences and inputs.

She was devised by Gallery Director Aidan Meller, with academic exploration by Researcher Lucy Seal. She was made by Engineered Arts Ltd and PhD students from the University of Oxford. The programming team is pioneering AI art techniques to produce remarkable reflections on the use of AI and new technologies today.

Lucy Seal, a Project Researcher for Ai-Da Robot, said: “If Ai-Da does just one important thing, it would be to get us considering the blurring in human/machine relations, and encouraging us to think more carefully and more slowly about the choices we make for our future – there are clear advantages that need to be developed and celebrated. However, Orwell and Huxley’s cautionary messages remain relevant and we would do well to take heed.”