HOW LONG IS YOUR PROJECT?

Rembrandt’s self-portraits in stimulating interaction with Bacon’s (at Ordovas to 16 Dec) could be seen as a lifelong project. After seven years, Charles Avery is halfway through creating his own world through ‘The Islanders’ (at Pilar Corrias to 16 Dec). That makes its eventual timespan likely to rival Nobson Newtown, for which Paul Noble has reached his 26th and penultimate main drawing after 15 years (at Gagosian to 17 Dec). In which context I start with three shows spanning 7, 15 and 35 years respectively. And my other choices feature artists whose individual works feel very much as if they are part of one long undeclared project: no strategies of inconsistency from Georg Karl Pfahler, Daniel Buren, Anne Craven, Neil Farber, Nathalie Djurberg, Tomma Abts or Alastair Mackie. A prize, though, to Bruce McLean, whose contribution to the fascinating show ‘Your Garden is Looking a mess Could You Please Tidy it up’ (at Payne Shurvell to 17 Dec) has been 40 years in the making…

It’s not for the squeamish, but Paul McCarthy’s sprawling three-site takeover of Hauser & Wirth has the swagger of a show which must be seen. The seven year ‘Pig Island’ project grew so big in the veteran provocateur’s LA studio that ladders are provided to aid viewing of the orchestrated version. It contains as many deviants, butt plugs, body parts and KFC buckets as one would expect – but seems mild alongside ‘Train, Mechanical’: two animatronic George Bush caricatures sodomise two big pigs, the ears of which are fucked by smaller pigs. The mechanism whinnies and whines, the Bush heads spin, eyes popping, and follow you round the room. And there’s much, much more – enough  to set McCarthy up as the romantic artist hero he’s debunking at Piccadilly in ‘The King’? 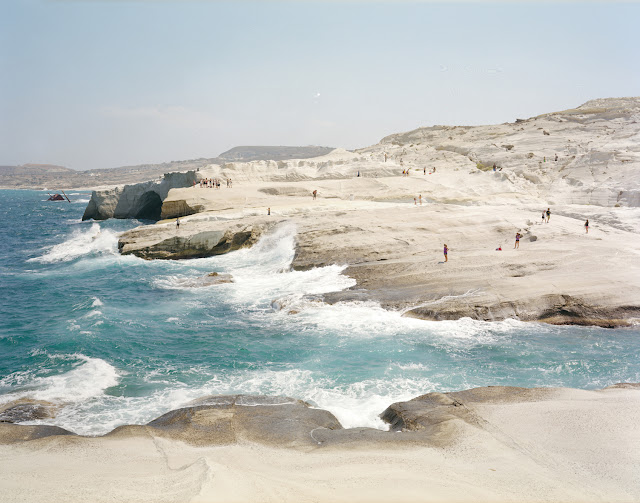 New Work @ Brancolini Grimaldi, 43-44 Albemarle Street – Central To 28 Jan:
The Italian photographer Massimo Vitali is known for the washed out effect he achieves through slight under-exposure, and his concentration over the last fifteen years on large colour prints of Mediterranean beach panoramas as a means of exploring the human interface with nature. This handsome show sees landscape features increasingly dominate the tourists who formerly took centre stage. These – far from being casual snaps – require detailed research and route planning ahead of a team of four with a truckload of equipment in what has become Vitali’s summer routine ever since Berlusconi first came to power. Perhaps, he hinted at the opening, a more radical change of tack may come now Berlusconi’s gone.

John Smith: Unusual Red Cardigan at Peer, 97-99 Hoxton St – Hoxton To 10 Dec:
The increasingly acclaimed but anonymously named John Smith wryly acknowledges his 1976 student film ‘The Girl Chewing Gum’ (in which a director’s voice seems to control the action in a street scene) remains his best-known – indeed, you can see the original at Tate Britain now. He has repeated this film shoot at the same street corner 35 years on and superimposed this over the earlier version,making for a commentary on social transformation. He also presents nine internet plagiarisms / homages of the film, and tracks the identity of an online advertiser of its VHS edition: Smith has bought and now exhibits some of the seller’s eBay offering, including the eponymous ‘Unusual Red Cardigan’. A typically eccentric tale of identity, value, change and the vagaries of fame… 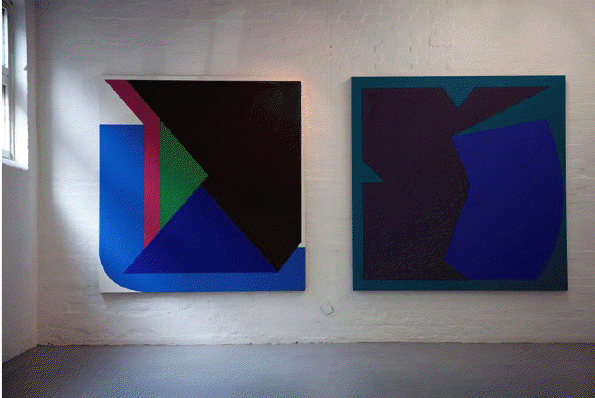 Paintings @ Maria Stenfors, Unit 4, 21 Wren St – Kings Cross To 17 Dec:
This is a rare but welcome British showing from the estate of Georg Karl Pfahler (1926-2002), a versatile Nuremberg-born ceramicist, painter, sculptor and architect. He arrived at a hard-edged style of abstraction in the early sixties, which was closer to emerging American models than to any other German work at the time – though he reminds me most of the Swiss Max Bill and his Danish contemporane, Ib Geertsen. Here six large, crisply unfussy canvases suit the gallery perfectly. Several feature a rounded framing device which implies they are extracted from a wider circle, and that contributes to a satisfying interplay between the paintings and also an overall sense of openness. 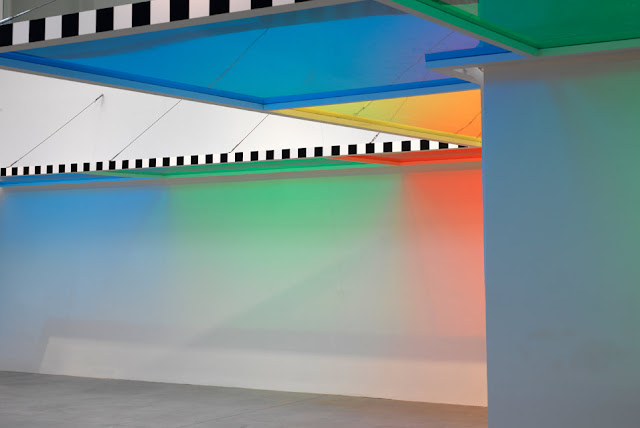 One Thing To Another, Situated Works @ Lisson Gallery, 29 Bell Street – Edgware Rd To 14 Jan:
Since 1965, the influential French artist Daniel Buren has always worked with the tool of 8.7cm wide stripes – he says for him to turn to something else would be like a similarly established pianist switching to the trumpet. If that sounds narrow, the point of the stripes is to make you see not them but other things – here, the gallery space, of course, but also perhaps a spiritual dimension: there’s a room of woven fibre optics which come and go with the current, and another of coloured shadows. Add an outdoor installation and Buren’s upcoming commission for the remodelled Tottenham Court Road tube station, and the idea that stripes can keep you busy for nigh on fifty years seems plausible enough. 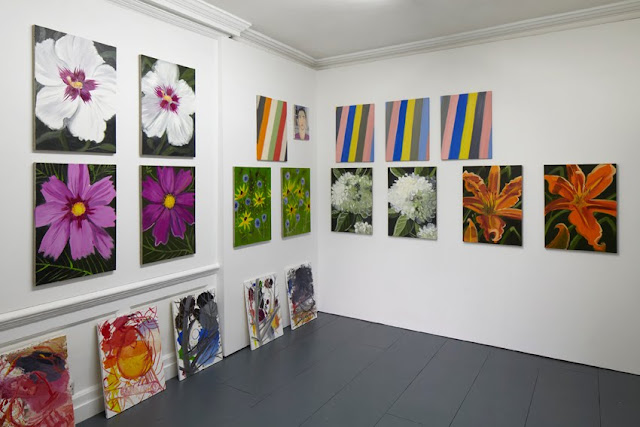 Ann Craven Summer @ Southard Reid, 2nd floor, 67 Dean St – Soho To 28 Jan:
Southard Reid, above Black’s club, has something of a coup with the first British solo show from American painter Ann Craven. For two decades she’s spoken to the sense in which you can’t capture the present before it becomes the past, by obsessively repainting similar scenes with a rapidity which sets out to challenge that logic. Here she tries to arrest flowers, portraits and the archetypal always-changing-yet-always-the-same moon. What’s more, the moments are sealed in triplicate: through the image itself, stripe paintings made with the left-over paint, and the palette which held the paint, itself completed with the ‘tag’ of a bird, Craven’s best-known motif. The whole amounts to a vibrant anamnesis of the fleeting nature of summer 2011. 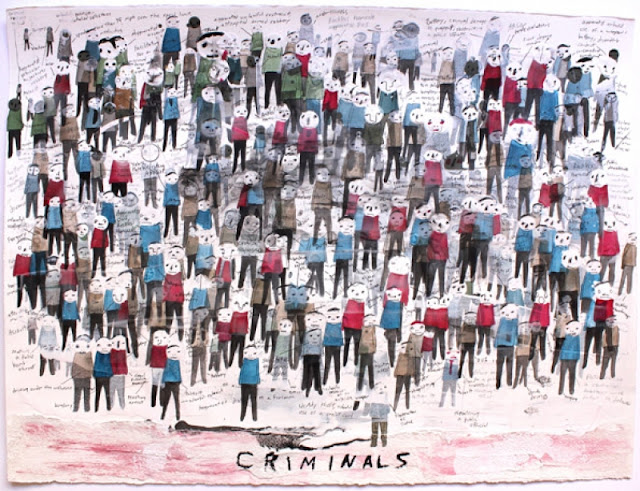 Ursa Major @ Pippy Houldsworth Gallery, 1st Floor, 6 Heddon St – Central To 14 Jan:
The second show in Pippy Houldsworth’s welcome return to a central location focuses on the phantasmal crowdscapes of Neil Farber, a mordantly witty painter who came to attention as part of the Winnipeg collective The Royal Art Lodge. Hundreds, sometimes thousands, of people emerge from acrylic and poured media, often with pools of gel for heads. They range from criminals to pigheads to the Fraternal Order of Peasants. I particularly like ‘Untitled (Better Than)’, which exploits the ghostliness of white gel to set up a dialogue between living people below and an ethereal cloud-crowd above, all of whom are murmuring words in which their heads are the ‘O’s, like vOices frOm beyOnd. 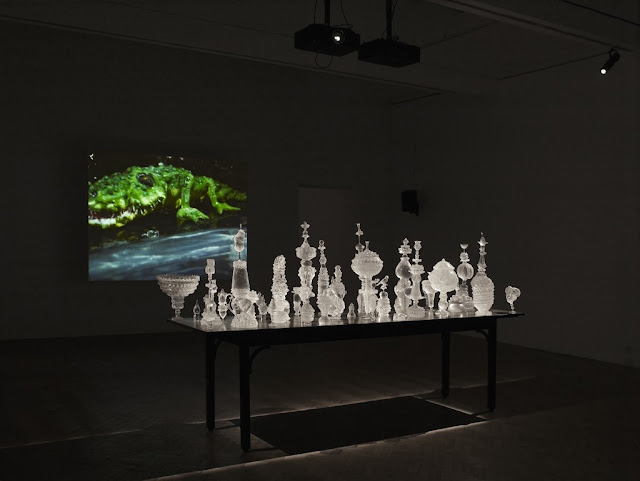 Nathalie Djuberg with music by Hans Berg: A World of Glass at Camden Arts Centre, Arkwright Rd – Finchley and Frognal To 8 Jan:
This is a substantial first UK solo exhibition for Nathalie Djurberg, the Swedish ‘claymation’ animator who explores taboos with charmingly crude and macabre relish: five older films in a 35 minute sequence (including the wonderfully direct birth reversal ‘it’s the Mother’) plus four new five minute tales running in convenient parallel to the same music. Berg’s score chimes with the striking glass-like sculptures which stand before the screens. They also act as props in the films, in which Djurberg’s archetypes show their own fragilities: all find that desire is stronger than sense, as when a woman made of butter incites a bull to lick her out of shape. 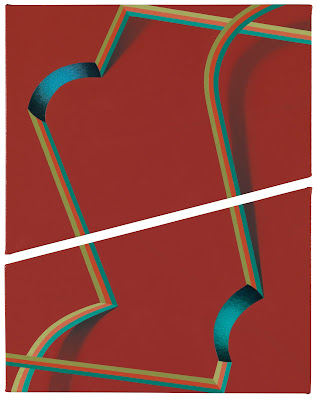 Tomma Abts @ Greengrassi, 1a Kempsford Rd – Kennington To 22 Dec:
The 2006 Tuner Prize winner isn’t one to hurry: this, her first subsequent London solo, features eight new drawings and eight smaller (Abts’ standard 48 x 38cm) new paintings quietly at one with their objecthood. The drawings share a linear red and yellow language which hints at architectural structures. The paintings emerge from the application of successive layers which generate ambiguities between painted shadows, built-up elements, apparent perspectives and the way colours advance or recede. It would be good to see these anyway, but there’s also an innovation in the form of channels cut fully through the canvas to divide them in two: the same, perhaps, but rather more so. 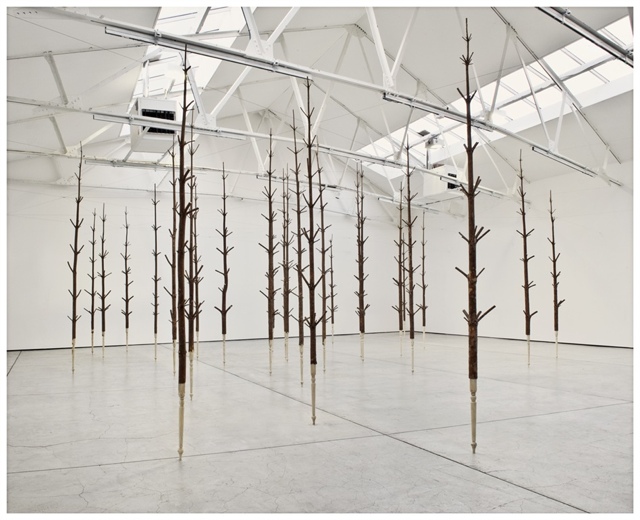 Alistair Mackie: Copse @ All Visual Arts, Omega Place – King’s Cross To 16 Dec:
Alastair Mackie characteristically uses natural materials to conceptual ends. Here he shows just one large installation, of severely pruned trees the bases of which have been carved into table legs. This witty conjunction of actuality and potential neatly reverses Giuseppe Penone’s well-known series revealing the tree within a block of timber: Mackie show the furniture ‘hidden’ in a tree, mixing inside and outside, nature and culture, not without a dark side in the copse’s violent combination of lopped limbs and wooden legs. Ask, and you can also see quite a cache of Mackie’s other work in the back room, made from wasp nests, mosquitoes, mouse skulls, rhea eggs…