The Shed has announced the opening date and building names for New Yorks newest not for profit artspace. On April 5, 2019 the arts centre which is located on Manhattan’s west side where the High Line meets Hudson Yards, will become a cultural hub for multidisciplinary art.

To date, The Shed has raised $488 million toward its capital campaign goal of $550 million

The Shed intends to commission original works of art, across all disciplines, for all audiences. From hip hop to classical music, painting and sculpture to literature, film to theatre and dance, The Shed brings together leading and emerging artists and thinkers from all disciplines under one roof. The Shed’s home, The Bloomberg Building, is a remarkable movable structure designed by Diller Scofidio + Renfro, Lead Architect, and Rockwell Group, Collaborating Architect, that physically transforms to support artists’ most ambitious ideas. Committed to nurturing artistic invention and bringing creative experiences to the broadest possible audiences, The Shed is a 21st-century space of and for New York City. 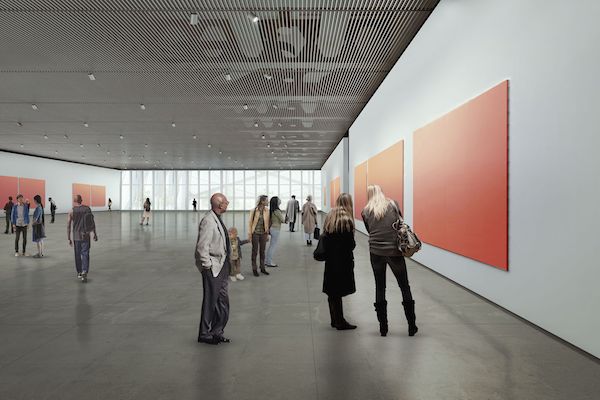 Gallery space at the Shed NY

The new nonprofit cultural organisation is dedicated to commissioning, developing, and presenting original works of art, across all disciplines, for all audiences, will launch its opening season on April 5, 2019. New York City’s new arts centre, designed for 21st-century artists and audiences, will present world premiere works in the performing arts, visual arts, and popular culture in its innovative, movable building when it opens its doors to the public on Manhattan’s west side. Poots also announced the honorary naming of The Shed’s building and two of its significant spaces in recognition of visionary supporters of the project, four additional artistic commissions for the first half of the opening season, and information about operating hours and tickets.

“We have built a home where established, and emerging artists working in all disciplines can create new work in ways that we cannot even imagine,” said Poots. “Beginning on April 5, 2019, The Shed’s community of neighbours, New Yorkers, and visitors from around the world will come together to experience the widest range of art forms in spaces that can accommodate artists’ most inventive and ambitious ideas.”

In recognition of the transformative vision and leadership of Michael R. Bloomberg, The Shed’s building, located on West 30th Street between 10th and 11th Avenues, has been named The Bloomberg Building. Chairman of The Shed’s Board of Directors Daniel L. Doctoroff said, “Nearly 15 years ago, Mayor Mike Bloomberg had the vision to embark on a complete transformation of Manhattan’s west side, and he had the foresight to know the Hudson Yards area needed a cultural anchor to ensure a vibrant and accessible future. The Shed is key to that vision, opening this April with an inaugural season that celebrates and showcases local and international creativity across all disciplines. In honour of Mike Bloomberg’s extraordinary leadership in nurturing the project, The Shed’s Board of Directors is proud to name our remarkable home The Bloomberg Building.”

The Shed also announced a gift of $27.5 million from Jonathan M. Tisch, Vice Chairman of its Board of Directors, and his wife, Lizzie Tisch. Their generous donation supports the building’s construction and includes a $10 million challenge grant to a newly formed Commissioning Fund, an initiative to support the creation of new work at The Shed. In their honour, two significant spaces on the building’s top level—a 9,500-square-foot skylit event and artist rehearsal space, and a lab for artistic development and experimentation—have been named The Lizzie and Jonathan Tisch Skylights and The Tisch Lab.

“Lizzie and I are proud to support the construction of this exceptional building, while also providing Alex and his outstanding team the resources necessary to commission artists from around the world to create the most ambitious and risk-taking work possible,” said Jonathan Tisch. “He has put together a spectacular program, and our intention is to challenge others to join us to support an effort that is not only worthwhile but tremendously exciting and important for New York City and beyond.”

“I am awestruck by the generosity and commitment of the Tisches,” added Doctoroff. “Not only are they preeminent philanthropists but, most importantly, their forward-thinking leadership seeks to imagine a cultural institution that brings wide-ranging audiences and creative voices together under one roof.”

To date, The Shed has raised $488 million toward its capital campaign goal of $550 million, which includes building costs, organisational start-up expenses, and a newly formed Commissioning Fund, an initiative to support the creation of new work at The Shed.

Adding to the previously announced programs for the opening season, four new commissions for spring-summer 2019 unveiled:

POWERPLAY
May 18 & 19, 2019
Through hip hop, spoken word, dance, and moving images, POWERPLAYexplores the act of restoring individual power through collective action. This original production is being created for The Shed by Latasha Alcindor, a multimedia artist known as LATASHÁ, in collaboration with special guest artists and participants in The Shed’s DIS OBEY program for NYC high school students, which explores themes of civil disobedience through poetry. POWERPLAY asks how we sustain and nourish ourselves while engaging in direct action. (The McCourt)

Beatriz González: Cinta Amarilla
June 19 – August 25, 2019
A new film directed by Yanina Valdivieso and Vanessa Bergonzoli, and produced by Display None, Cinta Amarilla (Yellow Tape) centres on Beatriz González’s monumental public artwork Auras Anónimas, an installation of 8,957 tombstones in Bogotá’s central cemetery featuring silhouettes of those who died due to armed conflict in Colombia’s civil war. This critical memorial to the victims of violence is now under threat of being demolished by Bogotá’s city administration. The documentary presents that story, in part to bring awareness to González’s struggle to save her work. This exhibition is part of a more extensive series at The Shed exploring the relationship between art and the politics of space. (Level 4 Gallery)

Tony Cokes and Oscar Murillo
June 19 – August 25, 2019
This exhibition pairs new works by artists Tony Cokes and Oscar Murillo one shared space. Cokes’ work, which places appropriated materials like pop music in a new, confrontational context, will explore the relationship between artist, studio, and urban development. Murillo, known for exploring the paradox of contemporary globalisation—constant exchange, yet increasing displacement—will create new work referencing Diego Rivera’s famed, destroyed murals at Rockefeller Center. The exhibition, which is part of a more extensive series at The Shed exploring the relationship between art and the politics of space, and will include a program of performances, talks, and events. (Level 4 Gallery)

Maze
July 23 – August 17, 2019
This powerful new production from street dance pioneer Reggie ‘Regg Roc’ Gray, co-directed by Kaneza Schaal, explores the puzzles, poetry, and infinite challenges of human coexistence. In Maze, a small audience stands face-to-face with masters of flexn, a form of street dance with roots in Jamaican bruk up and other styles. A labyrinth of light creates a kinetic architecture, illuminating the visible and invisible forces that guide our lives. The dancers include teaching artists and students from The Shed’s FlexNYCprogram, which engages youth in Title I public schools, public housing developments, and other community-based organisations by exploring social issues through self-expression. (The Theater)

The Wells Fargo Foundation is proud to be the leading supporter of MAZE and FLEXNYC.

Boots Riley Lecture
Poots also announced a one-night-only lecture on May 10, Art and Civil Disobedience with Boots Riley, (Sorry To Bother You) in conjunction with The Shed’s DIS OBEY program for high school students. (The McCourt)

Previously announced opening season commissions include Soundtrack of America, a five-night concert series celebrating the unrivalled impact of African American music, that will open The Shed on the evening of Friday, April 5. Conceived by acclaimed filmmaker and artist Steve McQueen and developed with a team of music visionaries and academic experts including Quincy Jones, Maureen Mahon, Dion ‘No I.D.’ Wilson, Tunji Balogun, and Greg Phillinganes, Soundtrack of America will be performed by a new generation of artists (through April 14). Three additional commissions will open on Saturday, April 6: Reich Richter Pärt, a live performance-exhibition pairing works by Gerhard Richter with a new composition by Steve Reich and an extant composition by Arvo Pärt (through June 2); Norma Jeane Baker of Troy, a partly spoken, partly sung dramatic work exploring the lives and myths of Marilyn Monroe and Helen of Troy by poet Anne Carson, starring Ben Whishaw and Renée Fleming, directed by Katie Mitchell (through May 19); and an exhibition of extant and newly commissioned work by artist Trisha Donnelly (through May 30).

Other 2019 commissions include: Björk’s Cornucopia, the multi-disciplinary artist’s first concert developed with theater collaborators, directed by John Tiffany (May 6 – June 1); Open Call, an unprecedented opportunity for 52 New York City-based emerging artists and collectives to develop and showcase their work throughout The Shed’s primary spaces (May 30 – August 25, and continuing in 2020); Dragon Spring Phoenix Rise, a futuristic kung fu musical co-conceived by Chen Shi-Zheng and Kung Fu Panda screenwriters Jonathan Aibel and Glenn Berger, with songs by Sia remixed by Arca and The Haxan Cloak, choreography by Akram Khan, and production design and costumes by Tim Yip (June 22 – July 27); and an expansive exhibition devoted to extent and newly commissioned work by Agnes Denes (Fall 2019).

Additional commissions for the second half of the 2019 opening season will be announced later this year.

Operating Hours and Tickets
Operating hours for exhibitions at The Shed, beginning on Saturday, April 6, will be Tuesday, Wednesday, and Sunday from 11 am to 6 pm; and Thursday, Friday, and Saturday from 11 am to 8 pm. Exhibitions will be closed on Mondays and most major holidays. Days and times for live productions will vary by show.

Tickets for the first half of the opening season (April – August 2019) will go on sale to the public on February 6, 2019 (tickets for Björk’s Cornucopia go on sale February 20, 2019). Shed Members receive presale access to tickets before the general public.

Building Update
Designed by Diller Scofidio + Renfro, Lead Architect, and Rockwell Group, Collaborating Architect, The Shed’s Bloomberg Building is an innovative 200,000-square-foot (18,500 m2) structure that can physically transform to support artists’ most ambitious ideas. The Shed’s eight-level base building includes two expansive, column-free galleries totalling 25,000 square feet (2,340 m2) of museum-quality space; a 500-seat theatre that can be subdivided into more intimate spaces; and on the top floor, The Tisch Skylights for events and artist rehearsals, and The Tisch Lab for artist development. A movable outer shell can double the building’s footprint when deployed over the adjacent plaza to create The McCourt, a 17,000-square-foot (1,600 m²) light-, sound-, and temperature-controlled space for large-scale performances, installations, and events. Named in recognition of entrepreneur, philanthropist, and Shed board member Frank H. McCourt, Jr., and his family, The McCourt is The Shed’s most iconic space and can accommodate audiences ranging from 1,250 seated to over 2,000 standing. When space is not needed, the movable shell can nest over the base building, opening The Plaza for outdoor use and programming.

The movable shell travels on a double-wheel track based on gantry crane technology commonly found in shipping ports and railway systems. A rack-and-pinion drive moves the shell forward and back on four single-axle and two double-axle bogie wheels that measure six feet in diameter; the deployment of the shell takes approximately five minutes. The exposed steel diagrid frame of the movable shell is clad in translucent pillows of durable and lightweight Teflon-based polymer, called ethylene tetrafluoroethylene (ETFE). With the thermal properties of insulating glass at a fraction of the weight, the translucent ETFE allows light to pass through and can withstand hurricane-force winds. Measuring almost 70 feet (21 meters) in length in some areas, The Shed’s ETFE panels are some of the largest ever produced.

Construction of The Shed is nearly complete. The final phase will include installation of metal cladding and related architectural finishes at the escalators and corridor areas; placement of polished concrete topping slabs on all base building floors; installation of paving stones that will form Lawrence Weiner’s site-specific artwork IN FRONT OF ITSELF in The Shed’s Plaza; installation of The McCourt’s theatrical shades; and completion of the building’s mechanical systems. The Shed is pursuing a LEED certification from the U.S. Green Building Council, which is expected in early 2019.