The internet giant Google has submitted plans for a ‘landscraper’ for its London headquarters. Construction on the project is on course to begin in 2018. The King’s Cross building which is as long as the Shard is tall is designed by Bjarke Ingels Group and Thomas Heatherwick Studios, the team behind TfL’s New Bus for London, the 2012 Olympic Cauldron and the scrapped Garden Bridge project. The eleven story building which resembles an ocean liner will abut platforms at London’s King’s Cross railway station. 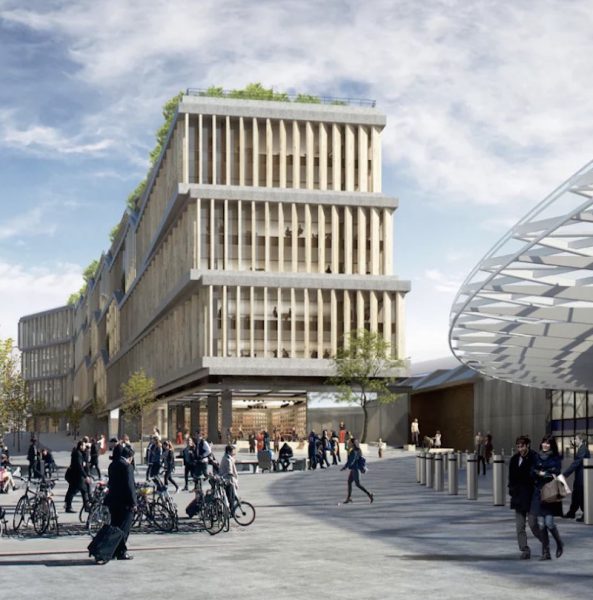 The new campus that will house 7,000 Google employees. Heatherwick said: “The area is a fascinating collision of diverse building types and spaces and I can’t help but love this mix of massive railway stations, roads, canals and other infrastructure all layered up into the most connected point in London.” He added: “Influenced by these surroundings, we have treated this new building for Google like a piece of infrastructure too, made from a family of interchangeable elements which ensure that the building and its workspace will stay flexible for years to come.” It is estimated to cost a cool £1bn.

Thomas Heatherwick was born in London in 1970. He studied three-dimensional design at Manchester Polytechnic and at the Royal College of Art, winning several prizes. Shortly after graduating from the Royal College of Art and after a two-year furniture MA course in 1994, he was commissioned by Harvey Nichols department store in Knightsbridge to design a temporary structure for the shop’s facade. His design was a ribbon of laminated wood that wound through the storefront windows. The design was widely acclaimed and won him a D&AD yellow pencil (the gold award) in 1997. Fifteen years on, the studio comprises a fifteen-strong team which includes architects, landscape architects, product designers and engineers. Work is carried out from a combined studio and workshop in Kings Cross where concept development, prototyping and fabrication take place under a single roof. The studio’s work spans commercial and residential building projects, master planning and infrastructure schemes as well as high profile works of public art.