Last week, an India ink drawing of Tintin and his dog Snowy sold for almost $500,000 (£380,000) at auction in Paris. The illustration from the album King Ottokar’s Sceptre 1939 was one of many items created by Hergé, the Belgian illustrator who invented Tintin, to go under the hammer. An original strip from the book The Shooting Star fetched $350,000. So why do these popular illustrations realise so much money, despite the politically controversial creator being a known Nazi collaborator producing work that is often deemed racist?

The Tintin adventures, created in 1929 have been translated into over 100 languages and sold more than 230 million copies worldwide. Tintin is one of the best-loved comic-book characters ever created. Translated into 90 languages and selling more than 200 million copies. The cartoons books are still read. A year ago a strip from Explorers on the Moon realised a $1.64m in Paris. Also that year, an illustration of Tintin in Shanghai from the book The Blue Lotus sold for $1.2m at auction in Hong Kong. 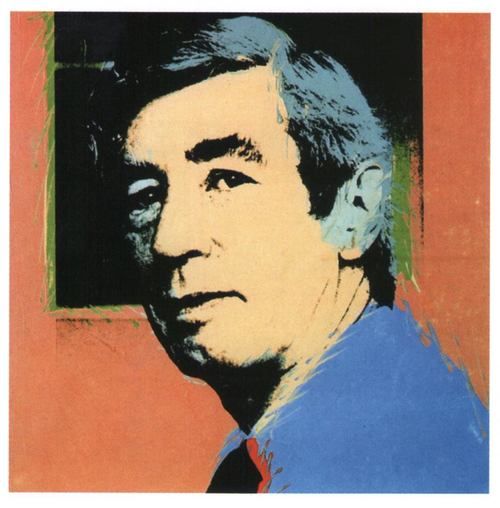 In 1977, Warhol produced a Pop Art portrait of Hergé.

Georges Prosper Remi (22 May 1907–3 March 1983), known by the pen name Hergé, was a Belgian cartoonist. He is best known for creating The Adventures of Tintin, the series of comic albums are considered classic European comics of the 20th century. He was also responsible for two other well-known series, Quick & Flupke (1930–40) and The Adventures of Jo, Zette and Jocko (1936–57). His works created in his distinct ligne claire drawing style.”1

Born to a lower-middle-class family in Etterbeek, Brussels, Hergé began his career by contributing illustrations to Scouting magazines, developing his first comic series, The Adventures of Totor, for Le Boy-Scout Belge in 1926. Working for the conservative Catholic newspaper Le Vingtième Siècle, he created The Adventures of Tintin in 1929 on the advice of its editor Norbert Wallez. Revolving around the actions of boy reporter Tintin and his dog Snowy, the series’ early instalments – Tintin in the Land of the Soviets, Tintin in the Congo, and Tintin in America – were designed as conservative propaganda for children. Many of the early Tintin comics often portray Africans as childish, lazy simpletons, which was often the justification for colonial conquest. The fact that Belgium led a violent empire in Congo makes it all a bit too close for comfort. Domestically successful, after serialisation the stories were published in book form, with Hergé continuing the series and also developing both the Quick & Flupke and Jo, Zette and Jocko series for Le Vingtième Siècle. Influenced by his friend Zhang Chongren, from 1934 Hergé placed far greater emphasis on conducting background research for his stories, resulting in increased realism from The Blue Lotus onward. Following the German occupation of Belgium in 1940, Le Vingtième Siècle was closed, but Hergé continued his series in Le Soir, a popular newspaper controlled by the Nazi administration. 2.

The Shooting Star, written in 1941, about a European expedition to recover a meteorite from Arctic waters. In the wartime version of the adventure the rival expedition is American and funded by a sinister Jewish financier called Blumenstein. In later editions the financier was changed to Bohlwinkel and the country to Sao Rico, but the unmistakably anti-Semitic caricature remained.

After the Allied liberation of Belgium in 1944, Le Soir was shut down and its staff – including Hergé were arrested – accused of having been collaborators. An official investigation was launched, and while no charges were brought against Hergé, in subsequent years he repeatedly faced accusations of having been a traitor and collaborator. With Raymond Leblanc, he established Tintin magazine in 1946, through which he serialised new Adventures of Tintin stories. As the magazine’s artistic director, he also oversaw the publication of other successful comics series, such as Edgar P. Jacobs’ Blake and Mortimer. In 1950 he established Studios Hergé as a team to aid him in his ongoing projects; prominent staff members Jacques Martin and Bob de Moor greatly contributed to subsequent volumes of The Adventures of Tintin. Amid personal turmoil following the collapse of his first marriage, he produced Tintin in Tibet, his personal favourite of his works. In later years he became less prolific and unsuccessfully attempted to establish himself as an abstract artist. 3.

HONG KONG.- HOCA Foundation is currently presenting a landmark exhibition exploring the adventures of global icon Tintin. The largest presentation in Hong Kong to date, it showcases eight albums from the renowned “The Adventures of Tintin” series. The immersive experience, featuring vivid scenography, celebrates the imaginative world created by the Belgian illustrator and creator of Tintin, Hergé. Presented in collaboration with the Hergé Museum, “THE WORLD OF TINTIN,” runs from November 17 – December 26, 2017, at the new ArtisTree venue.

Hergé’s Tintin works are big business. They have been globally acclaimed for their clarity of draughtsmanship and meticulous, well-researched plots. They have been the source of a wide range of adaptations, in theatre, radio and film. The Tintin film despite being made by Steven Spielberg was a flop. The fact that Spielberg based a film on the material in the first place is surprising. At the time of the film’s release Spielberg said” Before we made Tintin, I didn’t know very much about Hergé’s political views and what happened during the war (Hergé was accused of being a Nazi sympathiser, having produced a Tintin strip for a Nazicontrolled newspaper). Nothing has been proven and I’m giving him the complete benefit of the doubt. I don’t even think about that part of his life. There are so many rumours about so many of us in the public eye. Sometimes it’s too hard to deny what is not true. You get tired of always saying that’s not so. So we just continue telling good stories.”