Most of the commercial galleries are closed over the Christmas and New Year period. The big museums and galleries tend to be open, but will the major shows – Gauguin, Canaletto, Muybridge etc.. – be too heavy after a matching dinner? Perhaps a small show in a big gallery will suit… 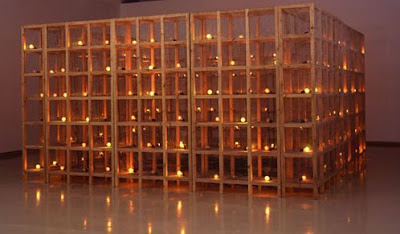 The Whitechapel’s redesign is pretty-much predicated on having numerous sideshows, and – whatever the ethics of displaying a private collection in a public museum – the sequence of four displays taken from the Daskalopoulos Collection is proving a highlight. The third is the first British showing for the heavy Hatoum which is her 1996 installation ‘Current Disturbance’: 200 pulsing light bulbs with matching current amplifications, each in a cage of sorts. Domestic discomfort meets an atmosphere of darker incarceration. 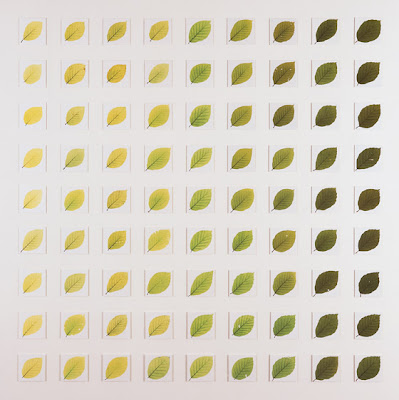 ‘Breathing in the Beech Wood, Homeland, Dartmoor, Twenty-four Days of Sunlight, May 2004’

Don’t know your chemigrams from your luminograms? Then head for this thorough account of five artists who create images on photographic paper by chemical, shadow-casting and light-manipulating means – but without cameras. They tend towards representational work which looks to make visible what is not ordinarily seen and to interact directly with nature: ‘I wanted to be absorbed in the light as fully as possible’ says Garry Fabian Miller of how he came to make photogram sequences of leaves which parallel the photosynthesis they depict. That show may be too big for this set, but there’s also a diverting, separately-displayed, history of camera-lessness taken from the V & A’s own collection of photography. 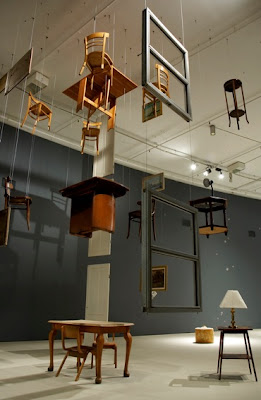 The Curve Gallery, The Barbican

‘The Independent’ creates sculptures inspired by that newspaper: not quite daily, as Ortega originally intended, but 22 pieces made in a month’s residence was hardly slacking. What counts though, is the quality and variety, and how the whole expands the newspaper medium in an echo of Ortega’s ‘exploded’ style of sculpture in which objects are deconstructed and suspended in a new formation. There’s an architecturally-themed one of those here, plus works inspired by newspaper content ranging from shoe adverts and football to the trapped miners in Chile. 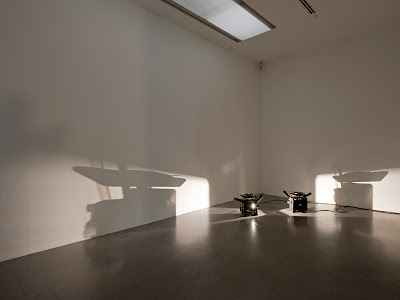 One of the best shows to date in the Level 2 gallery is this dance of sorts between art and its means. Which, the Berlin-based Italian seems to be asking, is which if two projectors are spotlighting each other, if the film wraps itself around the projector in contorted loops even while still working, if the film is used to suspend the projector in the air? Sound, light, celluloid and machine are separated out and held up for examination. Sculpture and cinema enter a dialogue in what the accompanying leaflet also explicates as ‘machines made of time’ – so: plenty here for post-prandial cogitation. 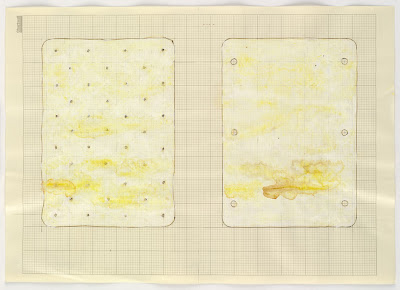 This show provides a convenient overview of Rachel Whiteread’s practice in the absence of what must by now be an overdue retrospective in England. She’s sometimes characterised as having done little more than expand on Bruce Nauman’s casting beneath a chair. But first, as Whiteread herself says, they arrive at the formal similarity from very different places, Nauman being more psychological, generating a feeling of entrapment in negative space, and Whiteread more physiological, connected with the human touch and its history in the space. Second, Whiteread’s work has developed in much more varied directions than that account would imply, embracing for example collective as well as personal experience, and positive and found as well as negative cast forms – all of which this show sets out captivatingly. 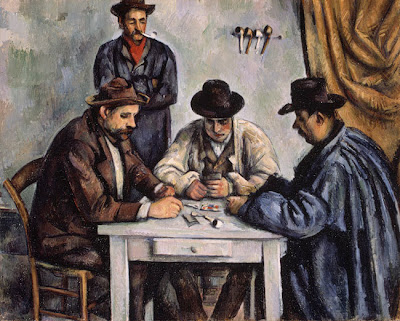 The Courtald has specialized in the focused show revolving around a key work from its collection, and follows up the outstanding contextualisation of Michelangelo’s ‘The Dream’ by providing a wider setting for one of its many Cézannes. The paintings of Provençal peasants playing cards stand somewhat aside in his oeuvre, making for an easily-digested strand which plays off the Dutch genre tradition of peasant revels to sober and solid – even clumsy – effect. The chance to see three of the five finished paintings plus preliminary studies is not to be missed…