Need an art fix out of gallery hours?

To celebrate the recent appearance of striking new works by James Hopkins and (for three months) Pipilotti Rist, Paul Carey-Kent has compiled a list of recent public sculptures / paintings below to create a top ten of 21st century art available all day in London, several of them by artists who also have gallery shows at the moment. Come the Olympics, there’ll be even more…

Sport can make an awkward subject, but James Hopkins scores with a new four metre high ball at Wembley. Its hexagons and pentagons make up a convincing black and white football from some angles, but transmute into a prototypical modernist abstraction from other viewpoints. That’s consistent with Hopkins’ established interest in how points of view change what we see, and so suggest that there is no objective ‘true perception’ – as in his equally cunning sculptures of words reflected in mirrors such that, for example,’rear’ becomes ‘view’. 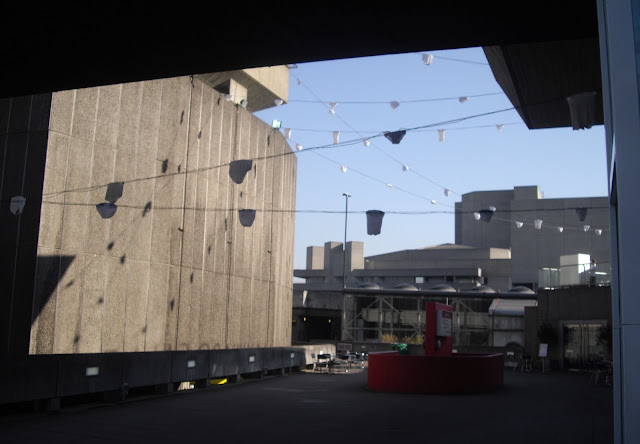 Just a few weeks ago the South Bank was decked in bunting to celebrate the 50th anniversary of the Festival of Britain. Now Pipilotti Rist has subverted the form by extending her immersive new exhibition beyond the gallery in the form of 300 pairs of underpants lit from within. Rist, mind you, has a genuine regard for pants as ‘the temple of our abdomen’ and what they cover as ‘the site of our entrance into the world, the centre of sexual pleasure’ and ‘the proof that our internal cleaning machine is miraculously working’. 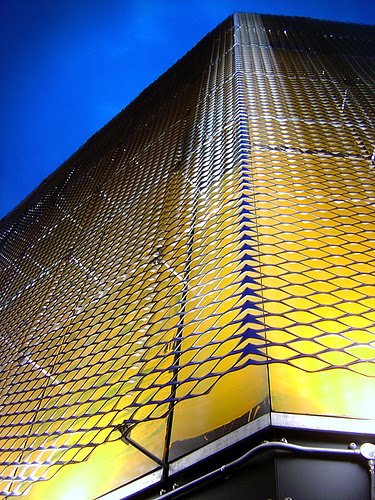 Where can you find 180 paintings on permanent outdoor display? You may have walked past and not noticed, but the panels which might seem to be merely cladding the Young Vic Theatre are indeed manifold individual yellow-tending abstracts by Clem Crosby, held in place and semi-hidden by a mesh screen. The paintings look best at night, when their variation and expressiveness emerges fully: add that the bar’s pretty good, and you don’t even need a play to justify a visit. I also recommend a trip to Pippy Houldsworth’s beautiful new space in Heddon Street to see more of Crosby’s work (to 12 Nov). 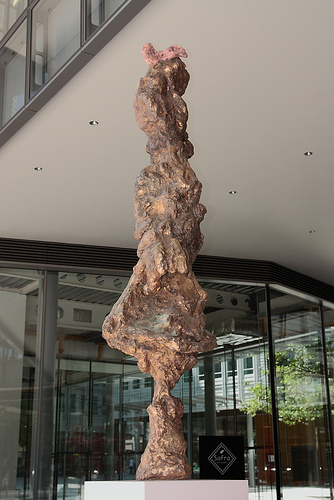 Central Saint Giles, the mixed use development near Tottenham Court tube which last year became the first project to be realised in Britain by Italian starchitect Renzo Piano, contains Rebecca Warren’s ‘William’. Its a small work scaled up to become a bronze public sculpture, and refers to the memorialising of powerful men whilst betraying its origins as a lumpy clay amalgam of body parts – not even all male – scaled up to that pretence. Can be paired with Warren’s new show at Maureen Paley… 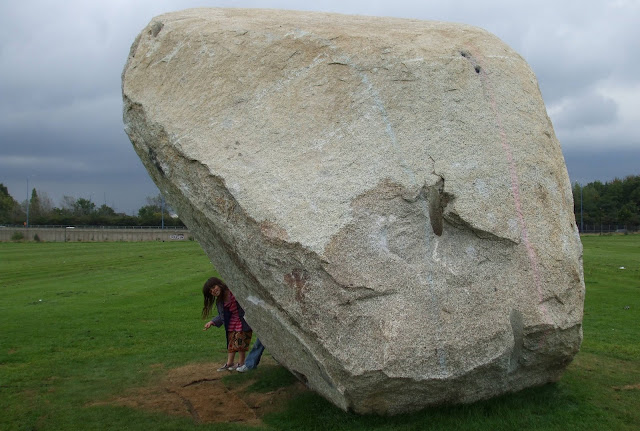 Two Hackney green spaces each feature a 100 tonne chunk of solid granite, over four metres high. John Frankland is the sculptor and keen rock climber whose rugged modern monoliths Boulder (Shoreditch Park) and Boulder (Mabley Green) are not just readymades-come-land art-come- landmarks, but are also designed to be climbed. That’s helped by the holes remaining from the preparations for the explosions which blasted the rocks from their cliff face. Like Rebecca Warren’s work, they deflate the monumental. 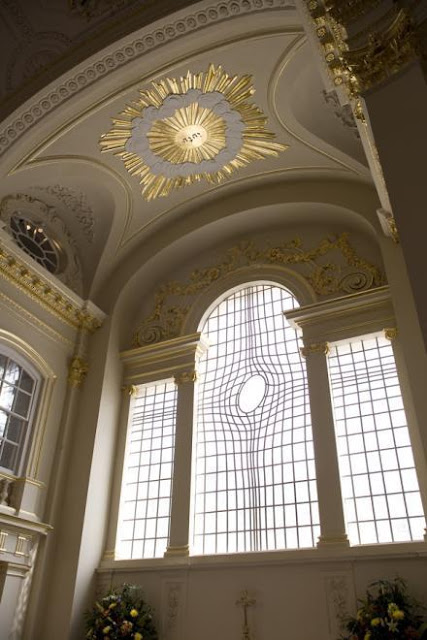 London-based Iranian Shirazeh Houshiary typically explores the interface between modernism and spirituality. That fitted ideally with a commission – together with her architect husband Pip Horne – for the East Window in Nash’s classic interior. Houshiary warps the stained-glass-style leaded grid into an abstraction which makes the most of the light while elegantly picking up on both the cross and the bomb damage which destroyed the historic window. The full range of Hushiary’s work can currently be seen at the Lisson Gallery. 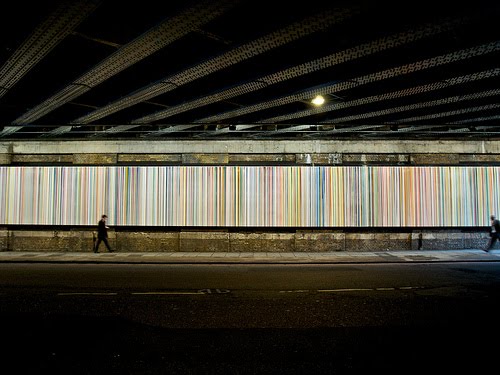 Ian Davenport – showing through October at both Waddington Custot and Alan Cristea in Cork Street – often uses a syringe to drip the paint down canvases or gallery walls: the resulting stripes are on the borders of control. The massive (10 feet x 100 feet 3 metres high x 28 metres long) version beneath a railway bridge near Tate Modern used a special syringe to apply 300 colours of fluid enamel on steel panels, which were fired at 825 °C in a factory near Dresden. 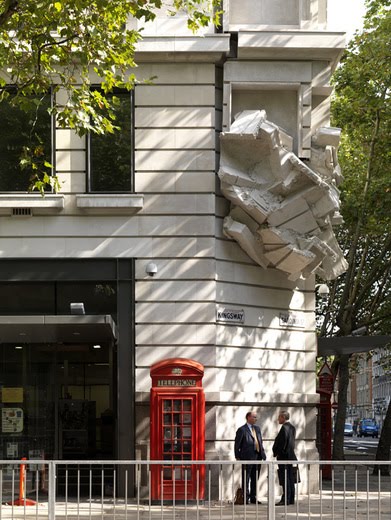 Richard Wilson is the contemporary master of radical public artworks. For the LSE he provides a particularly effective ‘what on earth is that?’ on the corner of their Kingsway site. Where it looks as if the corner of the building has been sliced away to facilitate the movement of passers by, Wilson has added a new corner section made from vertical slices of the rest of the building, the lower section of which appears compressed and twisted as if shunted upwards to free up the pavement. That’s a new kind of pedestrian power! 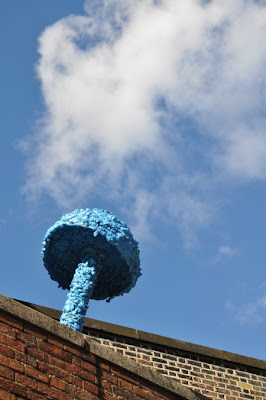 Street art is not readily associated with sculpture, but since 2009 South African Christiaan Nagel has – illegally – placed over a hundred giant mushrooms on derelict rooftops around the East End. Being made from polyurethane, they’re not good to eat but are light enough for him carry as he climbs. Most are colourful enough to feel more psychedelic than atomic, and somehow seem friendlier than graffiti. 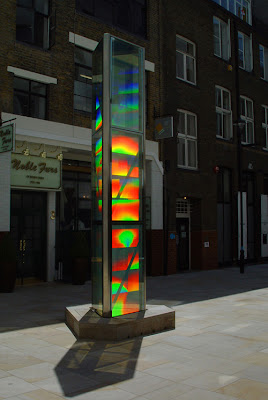 The Crown Estate – as is only logical, given the name – owns all of Regent’s Street, and commissioned German public sculpture specialist Michael Bleyenberg to make this tower. It contains Holographic Optical Elements which, embedded between glass and mirrors, make for a prism-like colour play which catches the sun by day and is lit up at night. Bleyenberg trained as a painter before switching to lasers and computers, and describes his work as ‘light architecture’. An interesting piece, even though the nearby Sadie Coles Gallery tends to outpunch it. – Paul Carey Kent © 2011