Death Mask by artist Tracey Emin, has been purchased by The National Portrait Gallery in London, it was announced today, Thursday 13 April 2017. The cast bronze depiction has been bought for £67,500 with a contribution of £30,000 from the Art Fund, and further support from White Cube and the artist. Emin and her gallery White Cube priced the mask at £60,000 – but offered the National Portrait Gallery a £30,000 museum discount. The remaining £30,000 came from a grant from The Art Fund.

Tracey Emin cast her own ‘death mask’ during her lifetime

Death Mask was unveiled today at the National Portrait Gallery accompanying a new display Life, Death and Memory which looks at the complex and sometimes troubling relationship between portraiture and mortality, drawing together historic and contemporary works from the Gallery’s Collection.

In an ironic reference to the autobiographical nature of her work, Tracey Emin cast her own ‘death mask’ during her lifetime, creating her first sculptural work in bronze in 2002.

At the heart of the artist’s preoccupation with self-disclosure and her constant engagement with, and exploration of, her own life and body, Emin says that in this work she offers herself in perpetuity as an enclosed specimen or museum display, literally transforming herself into an object for the scrutiny of generations to come. The portrait joins one other work by the artist in the Gallery’s Collection, Tracey Emin (‘The Last Thing I said to you doesn’t leave me here. 1’), a photographic print from the year 2000. 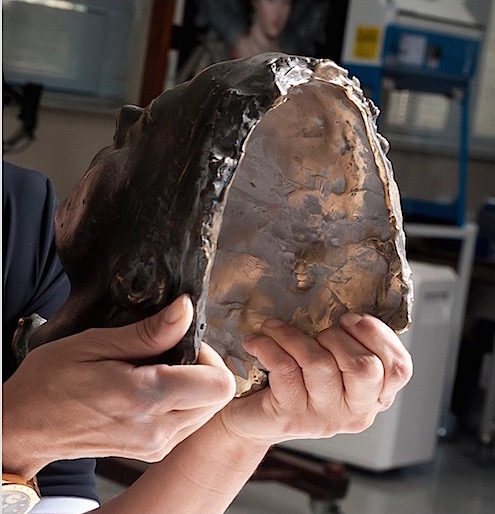 Tracey Emin with her portrait Death Mask, at the Conservation Studio, National Portrait Gallery, London on the 6th of April, 2017. Picture by Jorge Herrera.

There are also works on the theme by Ian Breakwell and Sam Taylor-Johnson, the last portrait for which the artist, film-maker and gardener Derek Jarman sat; and a moving photograph of the New Labour strategist Philip Gould, diagnosed with terminal cancer, standing on his burial plot at Highgate Cemetery nine days before his death in 2011.
Tracey Emin studied at Maidstone College of Art (1986-8) and the Royal College of Art (1987-9). Her work discloses the intimate details of her life across a range of media. Notable works include Everyone I Have Ever Slept With 1963–1995 (1995), shown at the Sensation exhibition (Royal Academy, 1997), and My Bed (1998). Emin represented Britain at the Venice Biennale in 2007 and was elected a Royal Academician in the same year. She was awarded a CBE in 2012.