The Connaught Christmas Tree is rapidly becoming an art community tradition in London. The commission has seen important artists such as the British sculptor Antony Gormley and YBA Damien Hirst design the festive tree. This year the tree has been designed by Tracey Emin, CBE, RA. It was unveiled outside the Mayfair hotel on the evening of 30 November, coinciding with the illumination of the annual Mount Street lights and marking the official arrival of the festive season. This very ‘Tracey’ decorated tree had all of the hallmarks of her trademark neon works.

Boutiques and retailers celebrated the occasion by extending opening hours to welcome guests in store with complimentary festive treats, hosting special events and promotions for an evening of food, fashion and culture. A Mount Street stalwart, The Connaught has collaborated with contemporary artist Tracey Emin to deliver this highly anticipated Christmas tree installation, set to build on the success of previous years. 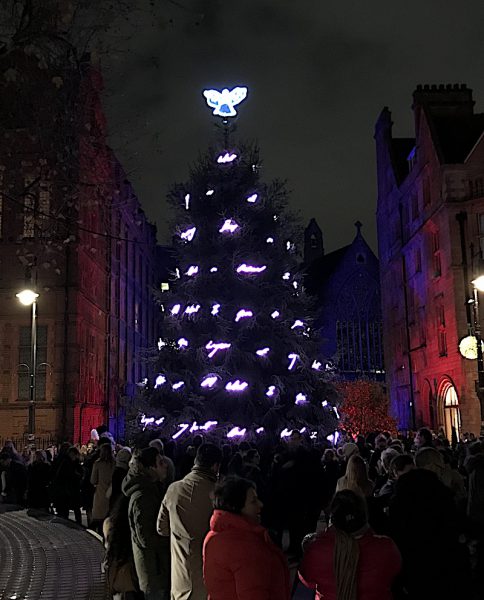 Tracey Emin was present on the night to officially countdown and unveil the tree to the public. Joanna Lea, Retail Director, Grosvenor Britain & Ireland commented: “We are delighted that global icon Tracey Emin is the confirmed artist this year. The Tracey Emin designed Christmas tree is entirely in-keeping with the character of Mount Street – a distinctive fusion of fashion and art in the best possible sense”. The Connaught will host carol singers and serve up roasted peanuts, cotton candy, mulled wine mince pies to keep customers fuelled throughout the evening. One of London’s most stylish streets, Mount Street’s selection of boutiques, heritage brands and restaurants, make it the leading destination for an elegant Christmas.

Christmas activity by retailers on the evening included:

• Christian Louboutin popped up outside the store, with a small cart offering complimentary sweet treats.

• Roland Mouret offering the opportunity to have the designers first fragrance engraved with upon purchase. Champagne and canapes

• Nicholas Kirkwood’s Christmas windows will be unveiled on the 30th, with Radi Dadi (NTS) DJ’ing – customers can enjoy alcohol-laced snow cones whilst browsing.

• Jenny Packham hosted a jewellery lucky dip (£20 to enter – with prizes to the value of £200), with complimentary mince pies and prosecco served throughout the evening.

• Love or Nothing Baby (LONB), travel-inspired goods specialist, will host a calligrapher to create custom gift tags and every purchase will be wrapped in a selection of vintage wrapping paper.

Tracey Emin CBE and RA Academician (b. 1963, London) lives and works in London. Renowned for her intimate storytelling and autobiographical works, Emin’s art is one of disclosure. Her life events are used as inspiration for artworks that range from painting, drawing, video, and installation, to photography, needlework and sculpture. Emin reveals her hopes, humiliations, failures and successes in candid and, at times, painfully honest work that is frequently both tragic and humorous. She has exhibited extensively internationally, including solo and group exhibitions in Holland, Germany, Japan, Australia and America. In 2007 Emin represented Britain at the 52nd Venice Biennale, became a Royal Academician, and was awarded an Honorary Doctorate from the Royal College of Art, London, Doctor of Letters from the University of Kent and Doctor of Philosophy from London Metropolitan University. During the Edinburgh Festival in 2008, Emin’s survey exhibition ‘20 Years’ opened at the Scottish National Gallery of Modern Art and then toured on to Centro de Arte Contemporáneo de Málaga, Spain and the Kunstmuseum Bern, Switzerland (March 19th – June 21st, 2009).