Several Turner Prize Winners including Antony Gormley Anish Kapoor and Grayson Perry have created artworks from found material taken from the fire-damaged Glasgow School of Art to raise funds for the restoration. Over twenty-five, international artists were posted the charred remains from the Mackintosh library, which was destroyed by fire in May 2014.The artworks will now be sold at auction to raise money for the Mackintosh Campus Appeal. £32m needs to be raised to complete the renovations. So far, the Mackintosh Campus Appeal has raised £18.5m.

A number of other well-known artists include Simon Starling, Cornelia Parker, Jenny Saville, David Shrigley and Douglas Gordon, The Chapman Brothers and Sir Peter Blake, will also be contributing. Each artist was sent a piece of material specifically chosen for them with a note telling them what it was, where it was from and explaining the concept of the auction.

The Mackintosh Library was celebrated for its design Perry, who has made an urn featuring the words “Art is dead. Long live Art”, said: “It’s a tragedy. It’s the most famous art school building in Britain. “It’s also the masterpiece of Mackintosh. It’s a double tragedy. “I was very excited when I received the box of charcoal. I had an idea almost immediately and the idea of making an urn was an obvious thing to do. “The idea of memorialising or celebrating the difficulty – honouring the wound. It’s something I’m trying to do. Move on and make the most of it. “I really like the idea of using the charcoal from the fire. I thought it was very clever. It’s also fresh – it’s not something that has come up before. “We’ve all been asked to do T-shirts, knickers and mugs – endless charity rounds. I get about two a week.” 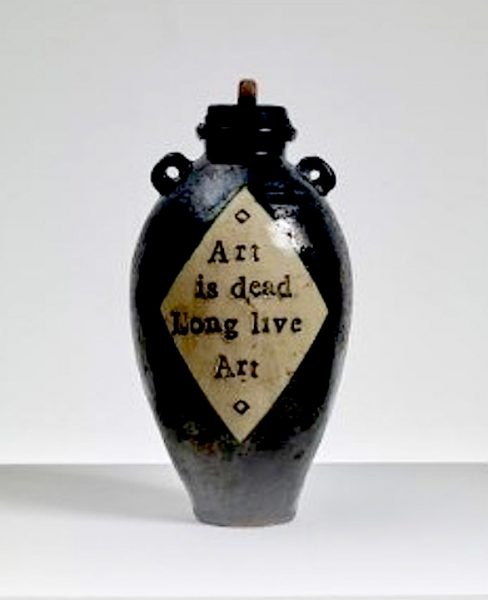 Ash To Art, the project’s title, was created by communications agency J. Walter Thompson London in collaboration with The Glasgow School of Art Development Trust. The work will be on display at Christie’s in London’s King Street from 3-7 March and will be auctioned during the Post-War and Contemporary Art Day Sale on 8 March. Each of the pieces, covering a range of practices including sculpture, photography, drawing and painting, has been created using remains from the fire, from charred timbers and debris to books and furniture. They include Kapoor’s wood fragments in a red perspex box and Gordon’s burnt wood cast in bronze.

The Grade-A listed building was destroyed when a student work caught on fire during the installation of the graduate year end show. Prof Tom Inns, director of the Glasgow School of Art, said: “It has been a pleasure to work with the creative team at J. Walter Thompson London over the last two years on this imaginative initiative that will help in our efforts to raise the £32m required to make our vision a reality.”