As a child in Jamaica, where there are no archaeological museums of any kind, I fell in love with this long-ago Egyptian pharaoh. I borrowed a book about King Tutankhamun by Howard Carter, miraculously present in my local library, to read all about him.

When I came to Britain to live, it was King Tut who sent me to museums, to learn more about the ancient world, When I went to university, it was this, in turn, that set me on the road to being an art critic. When I wanted to write for the Oxford student magazines, I was greeted without enthusiasm. “Oh,” the editors replied, “we’ve already got lots of people who do that. They’re good on new poetry and jazz.” Then one of them looked at me sharply. “But you go to museums, don’t you? OK, you can write for us about art.” This, in essence, is how I became an art critic. I owe my start to King Tut.

The Tutankhamun show that has just opened at the Saatchi Gallery comes at the end of a long series touring exhibitions, based on the contents of Tutankhamun’s tomb, which was discovered in the early 1920s, right after the horrors of the First World War. The discovery created a fashion for Ancient Egyptian things that flourished powerfully then. Interest in King Tut has been more recently revived through a vast number of touring exhibitions. The earliest in the sequence was held at the National Gallery in Washington in November 1961 and attracted just short of a quarter of a million visitors. The earliest such show in Britain took place at the British Museum in 1972. In just two weeks it racked up 1,694,174 attendances. There was another show more recently at the London 02, running from November 2007 to March 2008, which drew just short of 1, 200,000. ‘Tut’s treasures’, as they are invariably called, have been seen in numerous other locations – in the United States, in Canada, in Germany, in Switzerland, in Austria and Japan. The current manifestation, with a handful of other stopping places, is likely to be the last. Tut is due to settle down permanently in a grand new museum in Cairo. 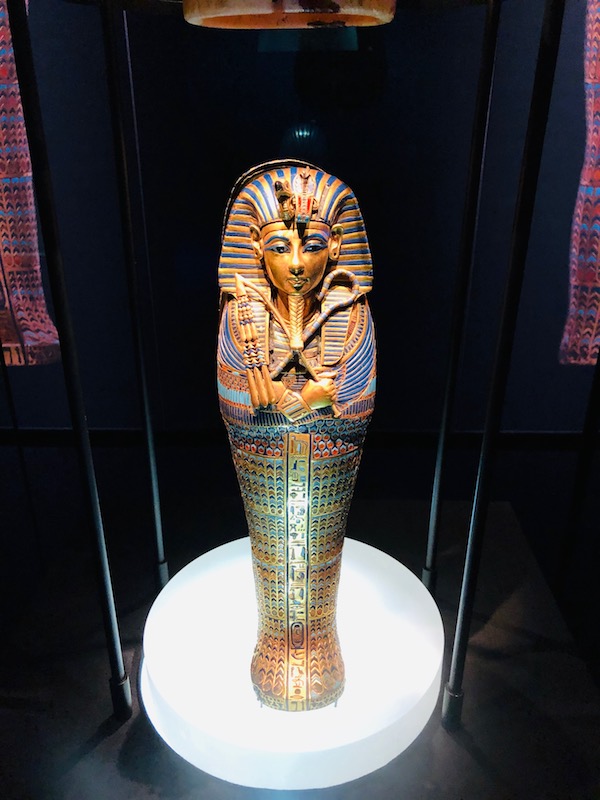 Of course, there have always been things in the vast hoard of objects that were found in the tomb that was considered too precious to travel. At Saatchi, you won’t find any of Tutankhamun’s nested coffins, nor the iconic gold portrait mask that adorned his corpse. The last of these, however, is present in a pretty convincing ‘not-for-sale’ replica nestling in the Saatchi gift show, together with a mass of lesser Tutankhamun tzotches and a whole lot of t-shirts. If you really want it and wave your credit card, you might be able to winkle it out of them.

As the gift shop and its contents tell you, this is not just a major archaeological exhibition. It’s also Pop culture event. This, I hasten to add, is no reason to despise it. It is exceptionally well done. It offers the visitor a rational narrative, plus, in addition, one of two of the ‘experiences’ so fashionable now in significant exhibitions. “Sit on this chair. Clap these headphones on. Furthermore, let daddy take you somewhere.” My guess is that there may be enormous queues for that. 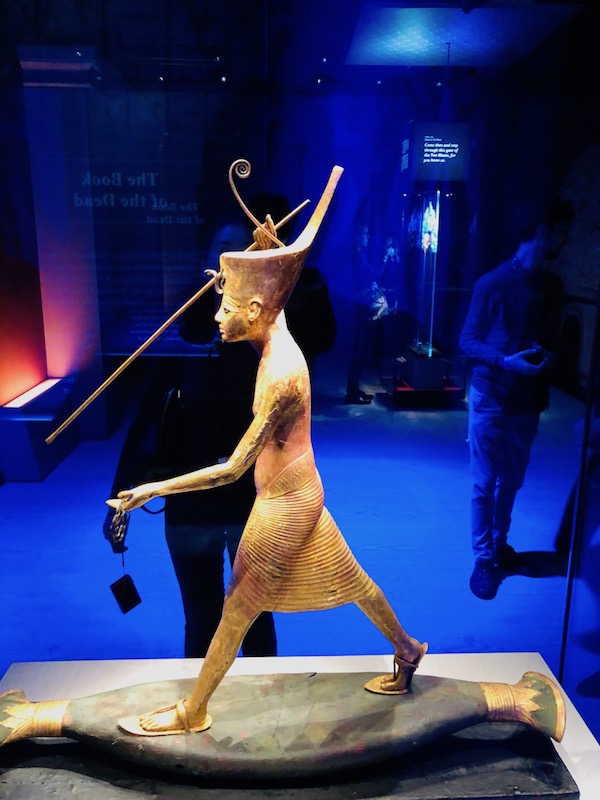 The rest of the show, however, won’t be the kind of a pain to visit that I remember from the BM exhibition in 1972. The exhibition is generously spaced and runs for much longer. It is not due to close until 3 May 2020.

The paradoxical thing, of course, is that Tutankhamun, in his own lifetime, was one of the least considerable of all Ancient Egyptian rulers. He comes at the very end of the 18th Dynasty, when the religious revolution initiated by Akhenaten, his father, was starting to peter out and the multitude of Egyptian gods were regaining their former influence. Tutankhamun, so the experts now suggest, was Akhenaten’s son by a lesser wife, married off to his half-sister, one of Akhenaten’s daughters by his main consort Nefertiti. Tutankhamun ascended the throne around the age of nine, and died, leaving no direct heir, aged around nineteen, maybe is part due to a broken leg sustained in a chariot accident. He had buck teeth and a club foot. The latter deformity was very probably the product of dynastic inbreeding. So too was the fact that his two children, both daughters, died at birth. Their tiny corpses were buried with him.

His famous tomb, where all the relics we now see were found, is small and uncharacteristic. The theory is that he was hurried into it because of his sudden death, which brought the line of succession to a halt. Some attempts at grave-robbery were made, shortly after Tutankhamun’s death, but these did not reach the main burial chamber. The grave goods disturbed by the robbers were hastily huddled together, the tomb was resealed and not rediscovered till Howard Carter located it.

This sequence of events ensured the preservation of its contents when other, grander tombs, belonging to pharaohs who were major figures in their time, were stripped bare. What these contents offer is a dazzling vision of a very sophisticated lifestyle. We are not being offered a historical lesson, or series of lessons, as we were by the show of Assyrian reliefs and tablets recently mounted by the BM. What we are being offered, instead, is an intimate look at the life of a long gone, faraway ruler, who counted for little in his own brief lifetime, but who has, because of this accidental preservation, acquired an unequalled magic for us. The show conveys this quite well.

TUTANKHAMUN: Treasures of the Golden Pharaoh  Saatchi Gallery Until 3 May 2020

Now here’s the downside which is a bit unclear