Ugo Rondinone has unveiled his latest work commissioned by Liverpool Biennial and Tate Liverpool was unveiled Tuesday 23 October 2018, by the artist. The large-scale, outdoor work entitled Liverpool Mountain is Rondinone’s first public artwork in the UK. The 10-metre-high sculpture consists of rocks stacked vertically, each painted a different fluorescent colour and is located in Mermaid Courtyard, next to Tate Liverpool, Royal Albert Dock Liverpool.

It is a sign of the confidence and creativity of Liverpool as a world city, which is of course home to Liverpool Biennial – Sally Tallant 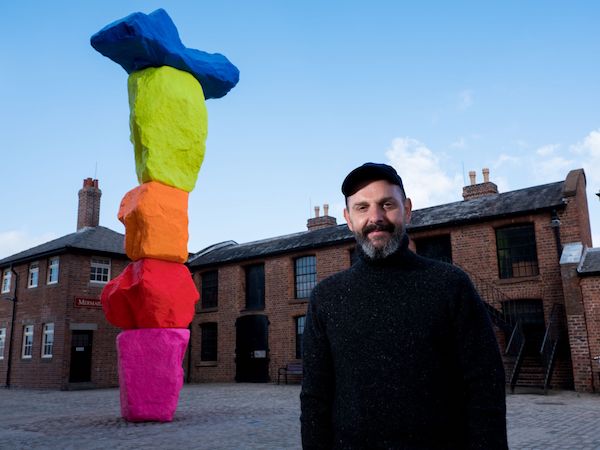 Ugo Rondinone’s work for Liverpool is part of his Magic Mountains series, with similar outdoor sculptures in Miami, Gwangju and Las Vegas. Suggestive both of ancient totems and heroic examples of land art, they consist of rocks stacked vertically, inspired by naturally occurring hoodoos – spires or pyramids of rock – and the art of meditative rock balancing. Each stone is painted a different fluorescent colour. The works seem to defy gravity in their teetering formations, poised between the natural the artificial and the manmade.

• Peter Blake’s Everybody Razzle Dazzle (2015), which covers the Mersey Ferry Snowdrop in a distinctive pattern in monochrome and colour, and has now become a much-loved feature of Liverpool’s waterfront life, taking passengers back and forth across the Mersey.

• Jaume Plensa’s Dream (2009) was chosen by a group of ex-miners and commissioned by St. Helens Council. Sited on top of the former Sutton Manor Colliery, Dream stands 20 metres high midway between Liverpool and Manchester.

• Antony Gormley’s Another Place (2005) consisting of 100 cast-iron sculptures that stretch across 3km of Crosby Beach, Merseyside. The piece has become one of the most well-loved and widely recognised public artworks in the UK.

Ugo Rondinone’s Liverpool Mountain is one of some events forming part of the Liverpool 2018 programme, which is supported by £5million from the Liverpool City Region Combined Authority. Other events in the programme include China Dream, Three Festivals Tall Ships Regatta, the finale of the Clipper Round the World Yacht Race and the return of the Giants. The project is supported by Royal Albert Dock Liverpool.

Sally Tallant, Director, Liverpool Biennial said: “Following in Liverpool’s great tradition of sculpture in public spaces, I am delighted that Ugo Rondinone, an internationally acclaimed artist, has created this major new work. It is a sign of the confidence and creativity of Liverpool as a world city, which is of course home to Liverpool Biennial, the UK’s biggest celebration of contemporary art.”

Kasia Redzisz, Senior Curator, Tate Liverpool, said: “2018 marks 30 years since Tate Liverpool opened and we’re proud to say we’ve welcomed more than 18 million visitors over the last three decades. We play a critical role in the city by bringing outstanding international and British art and artists to the region, and we’re delighted to have worked together with Liverpool Biennial, Royal Albert Dock Liverpool and the city to bring this incredible sculpture to Liverpool.”

Ugo Rondinone was born in 1964 in Brunnen, Switzerland. He studied at the University of Applied Arts, Vienna and is one of the most noted contemporary artists today, working in a wide range of media. He has exhibited widely including solo shows at Carre d’Art, Nimes; Boijmans van Beuningen, Rotterdam (2016); Palais de Tokyo, Paris; Secession, Vienna (2-15), Rockbund Art Museum, Shanghai; Museo Anahuacalli, Mexico (2014), Art Institute of Chicago, Chicago and M Museum, Leuven (2013).