The V&A has acquired a series of work exploring the design identity of Extinction Rebellion (XR) – a global activist group calling for urgent action on climate change through acts of non-violent civil disobedience and disruption. Since its first public action on 31 October 2018 urging the UK government to declare a climate and ecological emergency and commit to reducing emissions to net-zero by 2025, XR has grown into an international movement with over 363 groups active in 59 countries around the world.

The objects we bring into the V&A through our Rapid Response Collecting programme are evidence of social, technological and economic change – Corinna Gardner Curator

Ranging from the open-source Extinction Symbol created by street artist ESP in 2011 and adopted by XR in 2018, to the Declaration that accompanied their first act of Rebellion, and flags carried during mass demonstrations, a selection of these new acquisitions go on display in the V&A’s Rapid Response Collecting Gallery from Friday 26 July 2019.

Given by the Extinction Rebellion Arts Group, a coalition of graphic designers, artists and activists responsible for XR’s Design Programme, the objects reveal how XR has harnessed the power of open-source design to develop a coherent and impactful visual identity and sought to foster a collaborative ‘do-it-together’ movement recognisable across the globe. The objects have been acquired through the V&A’s Rapid Response Collecting programme that enables the acquisition and immediate display of design objects that address questions of social, political, technological and economic change. Since 2014, the Rapid Response Collection has grown to over thirty objects that chart the impact of contemporary design on the world today.

Corinna Gardner, Senior Curator of Design and Digital at the V&A, said: “Design has been key to Extinction Rebellion’s demands for urgent action on climate change. The strong graphic impact of the Extinction Symbol alongside a clear set of design principles have ensured that their acts of Rebellion are immediately recognisable. Punchy colours, woodblock prints, and carefully worded slogans available for download empower members of the public to produce their own creative responses that collectively amplify the XR’s call to action. 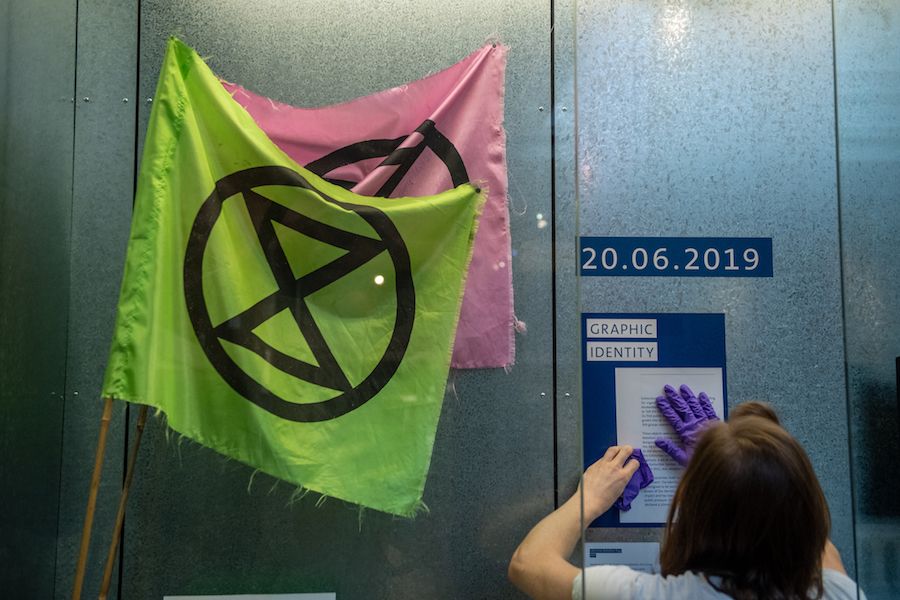 New Extinction Rebellion acquisitions go on display at the V&A. Photo by Chris J Ratcliffe Getty Images for The V&A

“The objects we bring into the V&A through our Rapid Response Collecting programme are evidence of social, technological and economic change. Extinction Rebellion has galvanised public concern for the planet, and their design approach stands in relation to earlier protest movements such as the Suffragettes who encouraged the wearing of purple, green and white to communicate their cause visually.”

Clive Russell, Extinction Rebellion Arts Group, said: “Extinction Rebellion is pleased our work and practice can be seen for free at the V&A, a collection that includes works by William Morris and other design activists from the past. All these designers addressed the issues of their times. The Climate and Ecological emergency is THE issue of our time and art and design is crucial to our non-violent actions and communication. We call on all artists and designers to think beyond the bullying constraints of commercial drudgery and join us in Rebellion.”

Balancing joy and menace and with a bold, tongue-in-cheek approach, XR’s graphics are characterised by four core design elements. These include the use of the Extinction Symbol, the XR logotype, a colour-palette of 12 playful tones including ‘Lemon’ yellow and ‘Angry’ pink influenced by pop artist Eduardo Paolozzi, and the fonts ‘FUCXED’ and ‘Crimson’. Often juxtaposing imagery of the natural world with more sinister images of skulls and bones, XR’s urgent visuals articulate hope, while outlining the grave consequences the group feels the failure to act will bring. 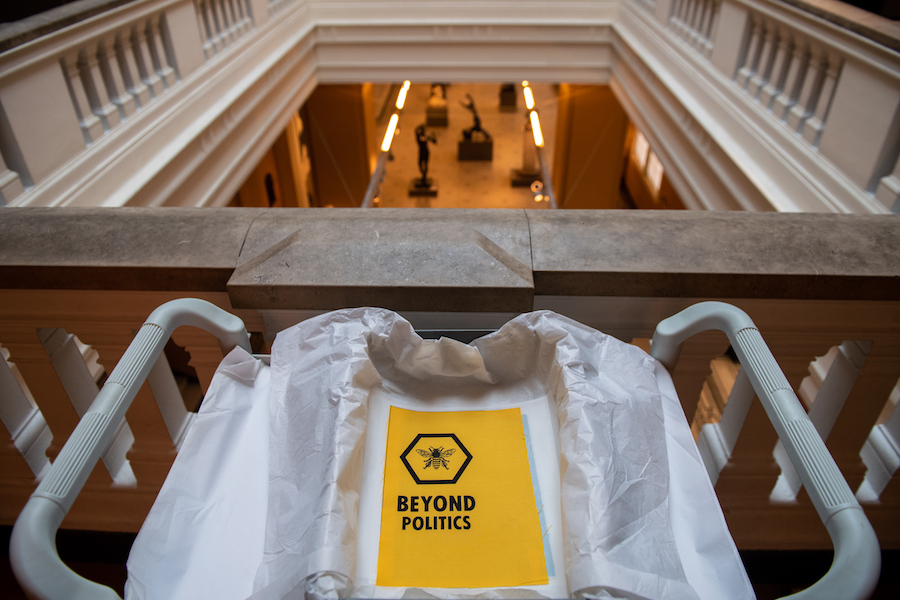 The new acquisitions include:

A digital file of the Extinction Symbol – the logo designed by east-London artist ESP in 2011 and adopted by XR in 2018, The Extinction Symbol website where the symbol is available for download for non-commercial use, The first printed pamphlet issued by XR group outlining its ‘Declaration of Rebellion’. The immediate popularity of these pamphlets makes this example from the first print-run extremely rare, while the screen-printed text and graphics outline the emphasis XR placed on a coherent and impactful visual identity from the outset, A digital file outlining XR’s open-source Design Programme, including the Extinction Symbol, Extinction Rebellion woodblock type and other graphics and materials for download. The open-source materials encouraging people to get involved in the creative process reflects the group’s ‘do-it-together’ ethos while ensuring a consistency of message and coherent visual identity for the international movement, Two printing blocks – a 3D-printed Extinction Rebellion logotype block and the Extinction Symbol made of machine-cut ply. The blocks were used during a series of public design workshops staged by the XR Arts Group in autumn 2018 and spring 2019 where people made their own protest flags, posters and banners. A green, blue and pink flag featuring the block-printed Extinction Symbol designed to create a high-impact sea of colour amidst the crowds Six brightly coloured screen-printed patches bearing the group’s slogans including ‘Tell the Truth’, Rebel for Life’ and ‘Beyond Politics. Small in scale they are designed to be worn by XR ‘rebels’ as a quick and easy way to show allegiance during a mass protest.

Besides, the V&A Museum of Childhood has acquired a child’s high-vis jacket worn during a peaceful XR rebellion. The high-vis jacket will go on show at the Bethnal Green museum from Friday 9 August 2019, as part of a free six-month display. Aimed at all ages, the exhibition will explore how XR – through its design work, values and organisational structure – creates spaces that are welcoming for all. The jacket will be shown alongside a series of loans including banners, stamps, flags and posters and photographs to tell the story of how XR engages with young families. The display will be accompanied by a programme of free workshops and family-friendly activities in collaboration with XR Families.

The V&A is committed to highlighting the implications of climate change through a dedicated programme of exhibitions, partnerships, conferences and events. Three of the museum’s recent exhibits have directly addressed sustainability, including Fashioned from Nature (2018), The Future Starts Here (2018) and the current Food: Bigger Than the Plate. The exhibition explores the politics and pleasure of food to ask how the collective choices we make can lead to a more sustainable and just food future.