Roberto Cicutto, President of La Biennale di Venezia and Cecilia Alemani  appointed as the Artistic Director of the Visual Arts Department by the Board of Directors on January 10, 2020 have announced the title and theme of the Biennale Arte 2022 in the Giardini, at the Arsenale, and at various sites around Venice.

The 59th International Art Exhibition will be titled The Milk of Dreams. This name is borrowed from a book by Leonora Carrington, in which, as Cecilia Alemani says, “the Surrealist artist describes a magical world where life is constantly re-envisioned through the prism of the imagination, and where everyone can change, be transformed, become something and someone else. The exhibition takes us on an imaginary journey through metamorphoses of the body and definitions of humanity.”

Cecilia Alemani explains, The Exhibition takes its name from a book by Surrealist artist Leonora Carrington (1917-2011). In the 1950s, while living in Mexico, Carrington dreamed up and illustrated mysterious tales, first directly on the walls of her home, then in a small notebook called The Milk of Dreams. Told in a dreamlike style that seemed to terrify young and old alike, Carrington’s stories describe a world set free, brimming with possibilities. But it is also the allegory of a century that imposed intolerable pressure on the individual, forcing Carrington into a life of exile: locked up in mental hospitals, an eternal object of fascination and desire, yet also a figure of startling power and mystery, always fleeing the strictures of a fixed, coherent identity. »

This Exhibition is grounded in many conversations with artists which took place over the past months. The questions that kept emerging seem to capture this moment in history, when the very survival of the species is threatened, but also to sum up doubts that pervade the sciences, arts, and myths of our time. How is the definition of the human changing? What constitutes life, and what differentiates animals, plants, humans, and non-humans? What are our responsibilities towards the planet, other people, and the other organisms we live with? And what would life and the Earth look like without us? »

The exhibition focuses on three themes in particular: the representation of bodies and their metamorphoses; the relationship between individuals and technologies; the connection between bodies and the Earth. 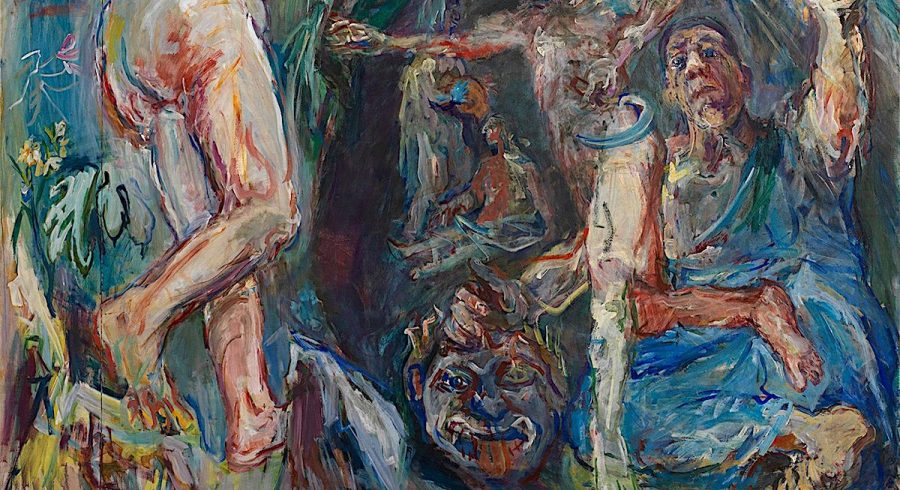 The largest work in The Courtauld’s collection by Austrian Expressionist Oskar Kokoschka  will be back on public display for the first time in over a decade in the Katja and Nicolai Tangen 20th Century Gallery. The epic triptych The Myth of Prometheus (1950) will be unveiled in November 2021 following the most significant modernisation project in its history, providing a transformed home for one of the UK’s greatest art collections.

The Courtauld’s much-loved collection, which belongs to the Samuel Courtauld Trust and ranges from the Middle Ages to the 20th Century – will be completely redisplayed and reinterpreted. These enhanced spaces will allow The Courtauld to give visitors greater insight into its collections, teaching and research and enable inspiring encounters with its great works of art. In addition, two brand new galleries will provide a beautiful new home for The Courtauld’s acclaimed programme of temporary exhibitions.

Masterpieces from The Courtauld’s world-famous collection of Impressionist and Post-Impressionist art by Cézanne, Manet, Van Gogh, Gauguin, Renoir, and Monet will be reunited in the spectacularly restored LVMH Great Room – London’s oldest purpose-built exhibition space and the largest space in Somerset House.

The new displays will reveal the quality and range of the collection like never before. The Blavatnik Fine Rooms, spanning the Piano Nobile across the whole of the second floor, will provide the stunning setting for a series of new displays of works from the Renaissance to the 18th Century. A new space will be dedicated to The Courtauld’s important collection of Medieval and Early Renaissance paintings and decorative arts.

Rooms devoted to 20th Century art and the Bloomsbury Group will showcase lesser-known areas of the collection through rotating displays. A new Project Space on the second floor will provide a flexible platform for spotlighting smaller temporary projects that give visitors special insights into The Courtauld’s collection, conservation and research. Displays in this space will play an important role in better connecting the public with the institution’s work as an internationally-renowned centre for the study of art history and conservation.

The Myth of Prometheus (1950) – will be back on public display for the first time in over a decade in the Katja and Nicolai Tangen 20th Century Gallery.

In the midst of a formative year for the UK, QUEERCIRCLE is looking to the future with the launch of a new permanent cultural space in the pioneering Design District. Working at the intersection of arts, culture and social action, their groundbreaking community-focused programme will champion the arts and strengthen links between culture, health and wellbeing.

Evolving out of a need for a new cultural space, QUEERCIRCLE have secured a site designed by David Kohn Architects. The new site will house a main gallery, a library and project spaces to deliver a diverse programme of exhibition commissions and collaborative artist residencies to support LGBTQ+ artists at pivotal stages in their career; and year-long learning and participation opportunities for the local and LGBTQ+ community.

This morning, QUEERCIRCLE founder Ashley Joiner has launched a public crowdfunding campaign aiming to raise £40,000 to open this much-needed cultural space for the UK’s LGBTQ+ community.

With the support of the public along with the Greater London Authority and Outset’s Studiomakers Initiative, QUEERCIRCLE aims to open at Design District in January 2022.

In recent years, London has witnessed the staggering loss of artist studios, and in the last decade, over 50% of LGBTQ+ venues have closed. Recognising the impact this was having on artists and the LGBTQ+ community, QUEERCIRCLE founder Ashley Joiner organised a series of workshops with artists, curators and community organisers to explore what a permanent space dedicated to LGBTQ+ artists and the community would and should look like.

The need for such a space has been exacerbated by the effects of COVID-19. A report into its impact on the LGBTQ+ community highlighted that 69% had shown depressive symptoms, rising to 90% among those who had experienced homophobia or transphobia.

This morning, QUEERCIRCLE  launched a crowdfunding campaign to raise £40,000 to open their new site, inviting support from the public to realise their vision for this important new community space.