Update – Savills Auction which took place on 27 March has finished and the property has been sold for £565,000.

Ever dream of owning something by the painter Vincent van Gogh?  His paintings sell for millions and that would be the price for a minor one. These days the purchase of a major work by the master of post impressionism would set you back at least 100m. So where could you snag the ultimate Van Gogh for a snip? If you have a spare 1/2 million in your piggy bank his Brixton residence is coming up for auction. This won’t be taking place at Christie’s or Sotheby’s but at Savills, who are notable estate agents, working in the upper end of the property market.

The next Savills Auction, to be held on 27 March, 2012, will be auctioning 87 Hackford Road, SW9, the former home of Vincent van Gogh, from 1873 – 1874. At the age of 20 Van Gogh arrived in London to start work at an art dealership in Southampton Street and from August of 1873 he lived in the white stucco, Georgian residence. Van Gogh came to work in London for the art dealer Goupil & Cie in Covent Garden. He walked to and from work each day, with his career as an artist looming in the future. The house was owned by a Mrs Loyer, who lived there with her daughter. It was Mrs Loyer’s daughter who Van Gogh reputedly first fell in love with. His love was documented in letters dotted with Keats’s poems  of love and desire. His advances were however totally unrequited and he became obsessive and a nuisance to the quiet Miss Loyer. He was soon asked to leave and find new lodgings in Kennington.

Savills stated; ‘It needs total modernisation but a lot of features such as the fireplaces where he would have warmed himself on a cold night were covered up so they are not damaged in any way.’ The property also remains much as it was in the1870’s with cornicing, floorboards and the original garden loo intact.
There is also a sketch of Hackford Road which includes number 87, this was in the possession of Eugenie Loyer’s grand daughter, Mrs Kathleen Maynard, and it is now in the Van Gogh museum in Amsterdam. The Hackford Road sketch is the earliest surviving drawing from Vincent’s English period. 87 Hackford Road, SW9 is an end of terrace three bed period property with rear garden and is in need of full modernisation and is on at a guide of £475,000.The Savills Auction will be held at: The Northumberland, 8 Northumberland Avenue, London, WC2N 5BY. 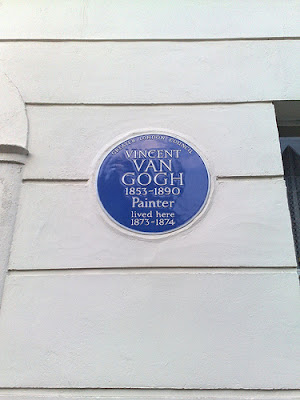