A – lister actors Leonardo DiCaprio, Dustin Hoffman, Nicole Kidman and Will Smith turned out for the amfAR AIDS benefit that is the social highlight of the Cannes film festival. The event held annually at the Eden Roc Hotel, Cap d’Antibes on the French Riviera saw celebrities and benefactors paying up to $500,000 for a table. But where was the Contemporary art on the auction block?

Instead of Damien Hirst and Tracey Emin auction highlights included a 1958 Jaguar XK150. David Beckham took the stage to introduce a once-in-a-lifetime opportunity, to take ten friends to join him in a 90-minute football match in Paris, followed by dinner and drinks. The low brow list of lots on the auction block consisted of a few obscure street artists and plenty of faux-lux trips to desert islands on gas guzzling super yachts.  The only noteworthy artist on offer was the British multimedia artist Chris Levine who donated his 2015 photograph of the 14th Dalai Lama, in which His Holiness posed for a formal portrait in aid of earthquake victims in Nepal. Known for his portrait of the Queen with her eyes closed Levine creates stunning light box portraits.

Street Art of little merit was auctioned including a painted 1977 Chevy Van titled Ice Cream, a work by Richard Hambleton. Inspired by his large-scale artworks that were installed in Rio de Janeiro during the Olympic Games, showcasing the “perfect motion” of an athlete’s skill, artist JR created GIANTS, The Diver, Sculpture of Cleuson LIMA DO ROSARIO for the amfAR Gala Cannes. The massive sculpture of a diver was on display at the event at the base of the allée of the Hôtel du Cap, ready to plunge into the Mediterranean. Ape Suzette, a sculpture of highly polished bronze featuring a comical giant ape by The Haas Brothers, twins Nikolai and Simon. A one-week trip for 30 guests aboard the superyacht Serenity. 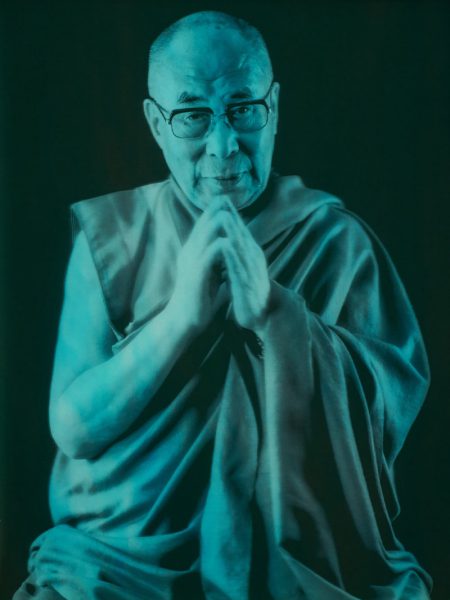 A seven-night stay for 60 people at the Finolhu Resort in the Maldives, with VIP access to the newly opened 1OAK Beach Club. Christoph Waltz introduced an opportunity for the lucky winner travel with Johan Ernst Nilson, one the world’s leading explorers, to meet His Holiness the Dalai Lama along with a five-day trek in the Indian Himalayas.

The Egg Number 1, Versailles, a work by French artist and interior designer Jonathan Loubens. Coco Rocha introduced a one-of-a-kind cognac celebrating eight generations of Hennessy Master Blenders from the same family. Hennessy•8 is a unique blend of eight rare eaux-de-vie created by Yann Fillioux and his nephew and appointed successor Renaud Fillioux de Gironde. Showcased by the acclaimed designer Arik Lévy in a Baccarat Crystal carafe enclosed in a precious chest made from wood from Hennessy Barrels, the masterpiece and its history were presented with Renaud and Arik in the audience.

A one-of-a-kind sculpture created specifically for the amfAR Gala Cannes by Alec Monopoly, the alias of an unidentified graffiti artist, titled Director Monopoly. This work, the largest sculpture Alec has created to date, represents the constant battle between business and creativity that takes place in Hollywood and is an ode to the larger than life nature of big budget blockbuster movies and capitalism that currently dominate the film industry. Karolína Kurková helped introduce Big Ego, a work by John Giorno. Dancing Fairy, one of the creations of acclaimed architect and designer Vasily Klyukin’s Fairy Fame series.

This year’s amfAR gala didn’t hit the fundraising mark of the 2014 event where Damien Hirst donated the £2.5m sculpture “Gone but not Forgotten,” a Gold Plated mammoth in a vitrine from his “Natural History” series. Although this is all in aid of a good cause the organisers have lost their direction and perhaps a rethink is necessary if the event is to survive and not be viewed as a shallow photo-op for over-privileged MTAs .