Updated: Artists Alexandra Sukhareva and Kirill Savchenkov and curator Raimundas Malašauskas have pulled out of the Russian Pavilion at the Venice Biennale. The invasion of Ukraine has put cultural exchange between Russia and the world in jeopardy.

The Milk of Dreams was the title of the 2022 Venice Biennale Russian pavilion exhibition. This name was borrowed from a book by Leonora Carrington. “The surrealist artist describes a magical world where life is constantly re-envisioned through the prism of the imagination, and where everyone can change, be transformed, become something and someone else.”

Curator Raimundas Malašauskas spoke of the Russian Pavilion project, “Choreographed as a scene of gestures, Kirill Savchenkov’s and Alexandra Sukhareva’s presentation was an attempt to address the complexity of bodily, material and technological times. It evoked a transition from one state to another one, a twisted flow between future and past, a suspended division between dead and alive (and AI), day and night. Sliding between languages and representations, pausing on the most recent social memory, freezing in anticipation of things unforeseen, preparing for tomorrow — be it catastrophic or bright, or both.”

“I cannot go on working on our project following the military invasion and bombing of Ukraine by Russia. “The Venice Biennale learned of the decision of the curator and the artists yesterday. By resigning the Russian Federation Pavilion has effectively canceled their participation in the Biennale.

Raimundas Malasauskas said, “I cannot work in the light of the bombing of Ukraine. The announcement came after a press release from the curator and the artists who resigned as an act against this ongoing war.

The Venice Biennale organisers learned of the decision of the curator and the artists who expressed full solidarity for this courageous and noble act and shared their reasons which dramatically depicted the tragedy in which the entire population of Ukraine finds itself.

The artist added, “Since I was born in Russia, I will not present my work at the Russian Pavilion at the Venice Biennale.” The war events brought a real earthquake among Russian artists with the resignation of the curator. The artists Alexandra Sukhareva and Kirill Savchenkov, supported by the curator Raimundas Malaauskas, gave up in protest, saying that “There is no place for art when civilians die under rocket fire, when citizens of Ukraine hide in shelters and when those who protest in Russia are silenced

For its part, the Biennale issued a statement which expresses solidarity “for this courageous and noble act”. 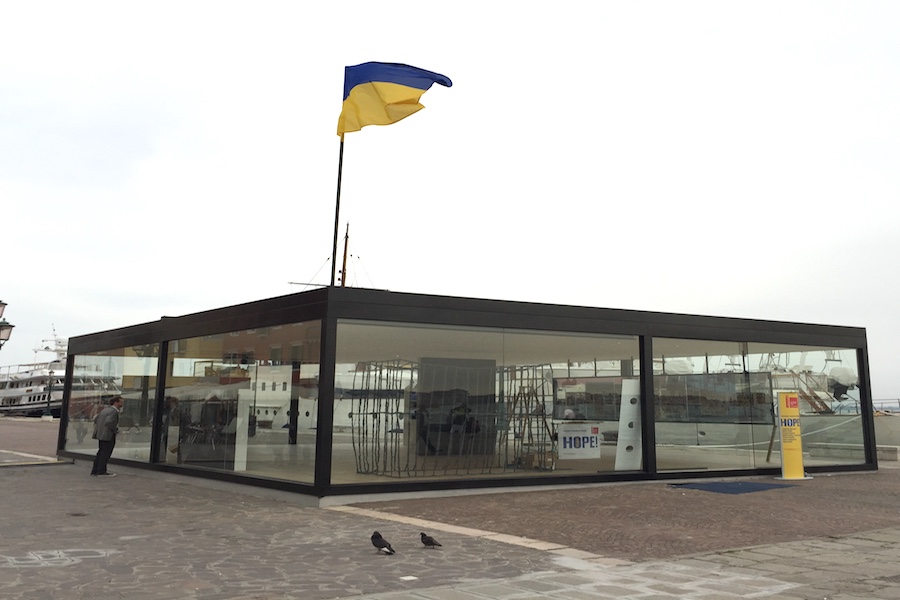 The curators of the Ukrainian pavilion, set to open in April at the Venice Biennale have suspended work on the exhibition. It has been reported that Pavlo Makov is sheltering with his family in Kharkiv. The three curators are in Keiv. The other team members live in Lviv in western Ukraine and are also sheltering. “We are determined to represent Ukraine at the 59th Venice Biennale, but not everything depends on us,” the statement went on to say, “We cannot confirm yet that our project will be completed, we can promise that we will do everything possible to save the unique artwork produced by Pavlo Makov”. During the past five months, Makov has worked on the Biennial installation representing Ukraine in the international contemporary art Biennale. “It deserves to be represented.” The artist and team have stated; “Our lives, the lives of our loved ones, like everything we believe in, peace, freedom, democracy and culture, which is at risk”.

The Ukrainian people are “proud, strong and dignified” – Marina Abramovic

Marina Abramovic has posted a video declaring solidarity with Ukraine following Russia’s invasion last Thursday. She cites Yugoslavia, her birthplace, as “a country which thrived under cultures from the West and Russia from the East.”

About the invasion, she says: “I have full solidarity with [the Ukrainian people] on this impossible day. An attack on Ukraine is an attack on all of us. It’s an attack on humanity and has to be stopped.”

Pussy Riot’s Nadya Tolokonnikova stated on social media: ‘Fuck Putin. I Hope He Dies Soon” The singer-activist accuses the E.U. of not taking the Russian invasion sufficiently seriously and discusses a crypto fundraiser that raised nearly $3 million for Ukraine in less than 24 hours

On Sunday night, Hollywood actors paid tribute to Ukraine during the Screen Actors’ Actors’ Guild Awards while noting leader Volodymyr Zelensky’s roots in entertainment. Actor Hugh Bonneville said; Until today, I had no idea who provided the voice (for Paddington Bear) in Ukraine. So, speaking for myself, thank you, President Zelenskiy.

After more than six years of conflict in eastern Ukraine, 3.4 million people need humanitarian assistance – 60 percent of them are women and children. In addition, approximately 1.6 million people have been forced from their homes and tens of thousands of civilians have been killed or wounded.

The situation is particularly grave for nearly 430,000 girls and boys living in areas with the fiercest fighting: Donetsk and Luhansk oblasts – within 20 kilometres of the ‘contact line’ – a line that divides government- from non-government-controlled sites.

As the Ukraine invasion intensifies, so too does a humanitarian crisis that has seen more than 100,000 civilians displaced and imperilled. Nonprofit organisations provide online resources to help those affected by the war, while several art institutions have pitched ways to aid Ukraine. For example, in an Instagram post, the Stedelijk Museum in Amsterdam shared a list of organisations accepting donations.

The ICRC (Red Cross) has been working in Ukraine since 2014. Our operations in the country are among the ten most extensive ICRC operations worldwide, with a team of over 600 staff members. Working closely with the Ukrainian Red Cross Society, we are increasing our response to the humanitarian needs in Ukraine. Our support includes emergency assistance such as food, water, and other essential items. The Red Cross also supports hospitals and primary healthcare facilities with medical equipment and emergency preparedness. In addition, they repair water stations and support households to rehabilitate their damaged homes. ICRC also help families separated by the conflict reconnect.