A door from the infamous Hotel Chelsea belonging to the room resident ‘Superstar’ actress Edie Sedgwick and artist Andy Warhol shared in 1965, while filming Chelsea Girls, has sold for $52,500.

Through exhaustive research, roughly half of these large wooden doors could be traced to the iconic individuals who lived behind them

For more than a century, the Chelsea attracted the most fascinating, accomplished individuals who often found themselves “living on the edge” at the fabled residential hotel. Now undergoing an extensive face lift, the Hotel may never again be the place to be seen or the setting for the wildest affairs, but memories of the Chelsea will live on in popular culture. The door to US singer Bob Dylan’s room at the Chelsea sold for $100,000 (£70,000). It was one of 50 doors from the hotel, to be sold. 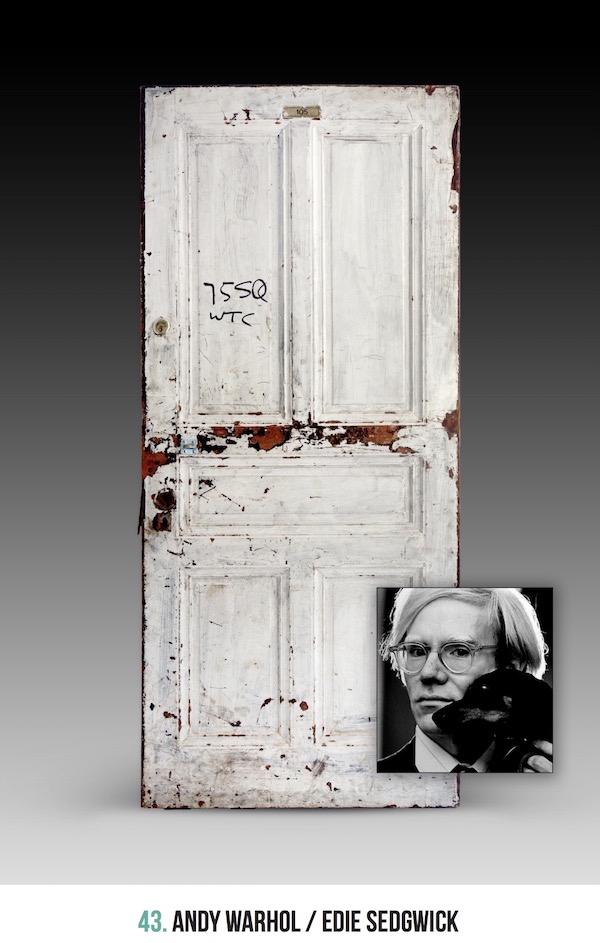 Through exhaustive research, roughly half of these large wooden doors could be traced to the iconic individuals who lived behind them. And although the research is continuing, it is expected that some doors can only be confirmed to be from the Hotel without a more precise personal connection. But even in those cases, owning a piece of Chelsea history is significant. Indeed, behind these doors lived the talented and famous (and infamous like Sid Vicious), where the Hotel served as home, workplace, artist’s retreat, hideaway, and love nest for the hippest, most talented, and most outrageous.

The door to a room used by singers Janis Joplin and Leonard Cohen during an affair, as well as the singer Joni Mitchell, fetched $85,000. A former tenant acquired the doors after renovation work began in 2011. The hotel, built in the 1880s, became a long-term residence for generations of singers, bohemians and writers. Jack Kerouac wrote his classic book On the Road while staying there in the 1950s. The door to his room sold at auction for $30,000.The hotel also served as a residence for writers Mark Twain and Tom Wolfe, and science fiction writer Arthur C Clarke wrote the screenplay for 2001: A Space Odyssey there. Janis Joplin and Leonard Cohen stayed at the Chelsea Hotel during an affair. Their door fetched $85,000

The most infamous incident to take place in the building came in 1978, when Sid Vicious from the UK punk band the Sex Pistols was charged with murder after Nancy Spungen was found stabbed to death in the room they shared. Vicious died of a heroin overdose before the case came to trial. This door was not offered in the sale. Other doors to go under the hammer at Guernsey’s auction house included a door to a room used by singer Madonna, actress Isabella Rosselini and filmmaker Shirley Clarke. It sold for $13,000.

Guitarist Jimi Hendrix’s door fetched $13,000 The doors were rescued by a former tenant, Jim Georgiou, who saw them being thrown away and arranged to take possession of them. “For me they were history and beauty and connected to my heart. They’re precious because there are so many people who’ve been through them,” he told the New York Times. The building was designated a city landmark in 1966 and was sold in 2016 to a group of investors. It stopped taking new bookings in 2011 but a small group of long-term residents are still living on the upper floors while the renovation work continues.

The Ricco/Maresca Gallery in NYC’s Chelsea neighbourhood, was the setting for Guernsey’s unprecedented auction of fifty-two original doors to residences within the fabled Chelsea Hotel. A substantial portion of the proceeds from the unique event supports City Harvest, the non-profit organisation that pioneered food rescue in 1982. This year, City Harvest will rescue 59 million pounds of nutritious food and deliver it to 500 community food programs across New York City, helping to feed the nearly 1.3 million New Yorkers facing hunger.