A new auction record for Wassily Kandinsky was broken twice last night at Sotheby’s London.  Murnau – Landschaft mit grünem Haus from 1909, sold for £21 million / $26.4 million / €23.9 million. Both early works by Kandinsky were among the few left in private hands, this painting made its auction debut having remained in the private collection of the same family since the 1920s. A major Expressionist painting of blazing colour, it captures the moment of transition in the artist’s career when he was on the cusp of moving from figuration to abstraction. That record was broken minutes later by Kandinsky’s powerful abstract masterpiece Bild mit weissen Linien from 1913, which was driven by a prolonged bidding battle to £33 million / $41.6 million / €37.6 million. A profoundly important work that hails from a landmark moment that fundamentally changed the way art was conceived and understood, it reveals the artist’s discovery that colour could become the principal subject of a painting. Virtually all of the significant paintings of 1913 are in major museum collections, and this work was appearing on the open market for the first time. Together with 4 Figuren auf 3 Quadraten from 1943, a late work illustrating Kandinsky’s interest in tribal iconography and geometry, the total achieved for Kandinsky tonight was £54.4 million / $68.6 million.

“To have three landmarks in the development of 20th Century art by Kandinsky, Miró, and Giacometti come to the market in a single sale tonight was momentous”.

Another major auction benchmark was set by Joan Miró’s Femme et Oiseaux, which sold for £24.6 million / $31 million / €28 million – a sotheby’s record for the artist in sterling. This price also marks the third highest result for a work on paper by a Western artist*. A mesmerising example of Miró’s celebrated lyricism and freedom of expression during WWII, the work is the eighth of the extraordinary series of twenty-three Constellations – one of the most significant bodies of work by any 20th-century artist. Offered at auction for the first time in 30 years, it was the first of the Constellations to appear on the open market at an auction at Sotheby’s in 2001. The previous record for Miró was set for Peinture (Étoile Bleue), which sold at Sotheby’s London in 2012 for £23.6 million / $37.1 million. 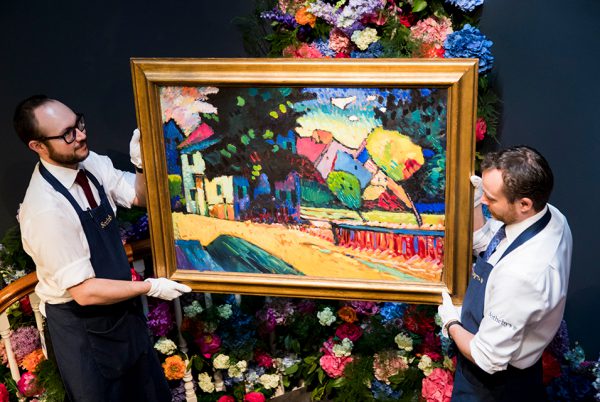 Further notable prices across the sales included a record established for a work by Théo van Ryssleberghe, as L’Escaut en a month d’Anvers (1892) sold for £8.5 million / $10.7 million (est. £7 10m), along with a record in sterling for a work on paper by Paul Klee, as Salon Tunisien sold for £2 million / $2.6 million (est. £1.5-2m).
Helena Newman, Global Co-Head of Sotheby’s Impressionist & Modern Art Department & Chairman of Sotheby’s Europe, said: “To have three landmarks in the development of 20th Century art by Kandinsky, Miró, and Giacometti come to the market in a single sale tonight was momentous. These key works stand as turning points in the history of art, and tonight auction history was made when the record for Kandinsky broken not just once but twice and unprecedented three works sold for £20m in a single London Evening Sale. The strength at the very highest level of the market was echoed across price points – and sizes. Collectors were out in force, participating from a record number of locations around the globe, with the level of Asian buyers as numerous as those from the US, underscoring the enduring importance of London as a key driver of the global art market.” 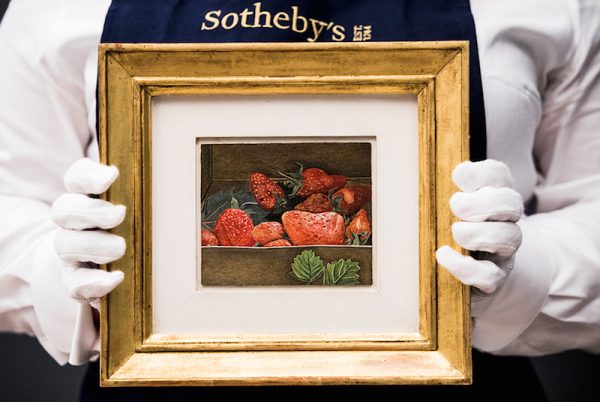 The curated Actual Size evening auction was led by an extremely well-preserved still-life of flowers by Ambrosius Bosschaert the Elder – which was both won and underbid by Asian private collectors – selling for £3 million / $3.7 million (est. £2-3m), an auction record for the artist in sterling. Asian interest was evident throughout the sale, with over 20% of lots in the Actual Size auction purchased by collectors from Asia. From the father of still-life painting to a record for a still-life by contemporary master Lucian Freud, whose Strawberries soared above high estimate to £1.2million / $1.5 million (est. £550,000-750,000) – or £120,000 per strawberry. A still-life painting of strawberries by Lucian Freud showing his fascination of the Old Masters, sold at Sotheby’s for £1,208,750. Although known first and foremost as a portrait painter, Freud’s rare still-lifes speak most clearly of his passion for Old Masters, for which he was dubbed “the contemporary old master”. Indeed – such was his fascination that he was given 24 hour access to the National Gallery by its director Neil MacGregor, so he could roam the galleries after midnight with his models and friends, or alone with his easel. These actual-size strawberries were painted in 1950 and given as a gift to Ann Rothermere, who was at the time deep in an affair with Ian Fleming (the two married in 1952). Ann was Freud’s patron and enjoyed with him a friendship so close that Fleming himself suspected them of having a concurrent affair. This tiny painting measures just 10.2 by 12 cm.

Works by Pablo Picasso also performed well throughout the auction, with six works together totalling £7.9 million / $9.9 million. These were led by Buste de Femme couchée from 1970 that fetched £2.4 million / $3 million – more than double its high estimate of £900,000. Eight bidders eagerly competed for the work in the room and by phone.