As a wheelchair user, I wanted to write a piece about what it’s like for a disabled person visiting commercial galleries in London.

Issues around accessibility are something the art world is becoming more conscious of. Following Ciara O’Connors Twitter thread which went viral, the art world took note. O’Connor rightly pointed out the myopic thoughtlessness in Olafur Eliasson’s artwork ‘A Spiral View’ in his recent Tate Modern retrospective, where his bodily claims of universality belied the fact that its steps excluded disabled people. On a similar note, Jeremy Deller’s Peterloo monument is now undergoing changes, as its participatory stepped design caused protests as again it unintentionally sidelined disabled people to mere spectator.

This drew my attention to highlight the accessibility of galleries in London. For whatever reasons commercial galleries choose to have their spaces in inaccessible locations, it isn’t the purpose of my piece to investigate why that might be, beyond obvious reasons such as lower cost leases and of finding appealing (although inaccessible) spaces that simply tick the right boxes for gallerists. 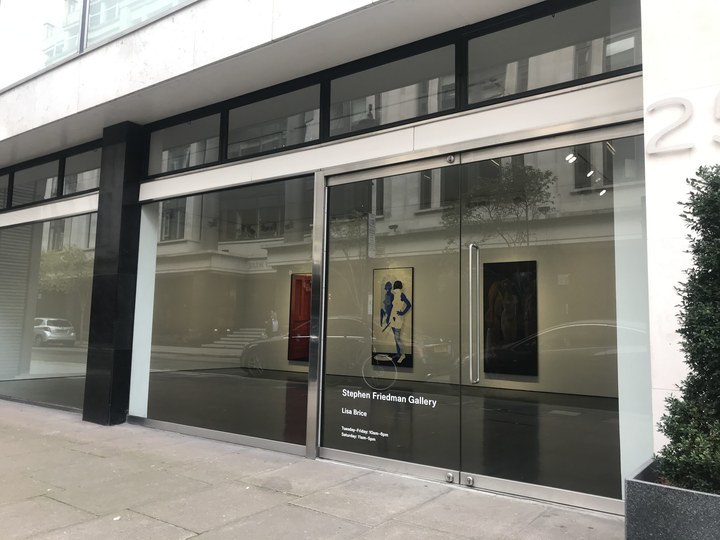 I visited most of the galleries during and after the Frieze Art Fair. Personally, I’ve avoided Frieze the last couple of years, but I do like visiting the galleries during this time. While there are great commercial spaces all over London, for this piece, I’ve mainly stuck to a cluster of galleries in the Westminster borough.

First off, you can forget the tube as that’s 90% inaccessible. So it’s helpful to have a car, even though finding a parking space in the west end is tricky, so a taxi or bus might be more useful. If you do take a car, you can’t use a disabled blue badge to park in Central London, so you have to locate free bays with metered parking. This is easier said than done and usually it’s a case of relying on divine providence.

I started at Tramp, Peter Doig’s space near Old Street to the opening of the immaculate paintings by Caroline Coon. Despite having been painting for decades, this was remarkably the artist’s first solo show in a London gallery. It’s a great ground floor space, but like most ground floor galleries you need to have somebody to accompany you, to help you up as there’s no ramp and a step up to the front door.

At the opening, Coon spoke warmly about Doig’s current show on at Michael Werner in Mayfair. She memorably described a painting of a bearded man using a wheelchair being helped along the street, which for Coon, showed Doig’s sense of humanity. I’m far from alone in loving Doig’s paintings and knowing that my Instagram would be full of images of the show I decided to check it out.

I had missed Doig’s last show there as I couldn’t face visiting the gallery again after my first visit there to see his opening show. Werner is on two floors, and they have a tiny lift. The first time I visited, my wheelchair wouldn’t fit in it, so I had to transfer out of my wheelchair onto a dining chair placed in the lift while my companion carried my wheelchair up the stairs for me to transfer back onto. It was a farce! This was back in 2012, fast forward to 2019 and thankfully on this occasion with a different companion who managed to ram and manoeuvre my chair in tighter, I didn’t have to transfer.
It was great seeing the new paintings, particularly the lion paintings and also the ones of the man on the beach in swimming trunks. I had missed these before, as I didn’t see the last show and he’s been using this motif now for a while. My own paintings deal with masculinities, so it was good to see these paintings. For me, the best of these with the figure in the background wrestling the snake was upstairs, as was the aforementioned wheelchair painting. 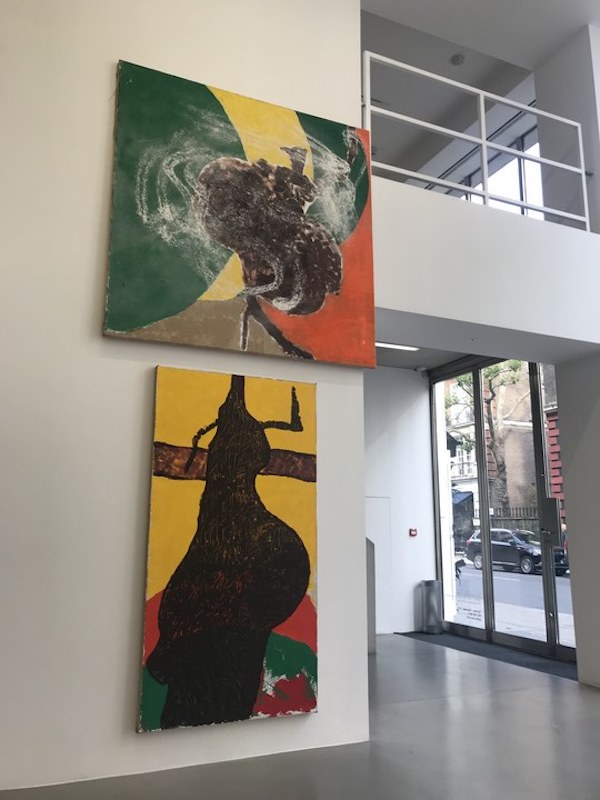 Following this, I went to Sadie Coles’ space in Davies Street where she was showing new paintings by London based painter Alvaro Barrington. Of their two London spaces, this is the only space that is accessible. As this gallery is spread over two floors with no lift, it’s frustrating as you always come away feeling as if you’ve only seen half of the show. Still, as the gallery is such a key player in the London art world, it’s great that it’s sort of accessible particularly so, as their bigger first-floor gallery at Kingly Street has no wheelchair access at all.

Next, I headed to see the Mona Hatoum show at White Cube Mason’s Yard. White Cube went from being a very inaccessible first-floor gallery on Duke Street to now having two spaces which are probably the best for access in London. The huge Bermondsey space is on the ground floor with level access, and their Mason’s Yard space has a lift to its main lower galleries. While I don’t expect many galleries to have the budgets White Cube have at their disposal, it’s good to think of the London art world as continually in flux adapted to changing for the better.

Finally, I visited Stephen Friedman Gallery to see the Lisa Brice show. The main gallery is on the ground floor, the second space across the road was showing a terrific series of ceramic masks by Jonathan Baldock. This gallery has several steps leading up to the gallery floor. However, they have a platform lift that is built into the front window that comes down to street level and goes back up again to the gallery level. This is exemplary. One of Stephen Friedman’s artists is Yinka Shonibare, whose a wheelchair user himself. I couldn’t help thinking that Shonibare had some input into how the gallery really works for wheelchair users. These kinds of simple alterations, when thought out in advance, are clearly not difficult for the leading galleries to overcome.

I was heartened to see that Arcadia Missa Gallery apologises and acknowledges on its website that the gallery is no longer accessible after having moved into a first-floor space. The gallery’s statement on its website welcomes disabled people to email them if they would like more information on their shows. It would be nice to think all the inaccessible galleries could follow their lead and have similar accessibility information on their own websites.