Wolfgang Tillmans the Turner Prize-winning artist is presented in a new solo exhibition at Tate Modern. The exhibition concentrates on his practice spreading across different media since 2003. The show is political without being in your face confrontational and covers subjects from LGBTQ rights, green issues to his well-documented campaign to stay in the European Union. Tillmans first emerged on the scene in the 1990s with his photographs of everyday life and contemporary culture including the club/rave scene in Hamberg. This exhibition mainly focuses on his photographs, video, digital slide projections, publications, curatorial projects and recorded music.

Tillmans’s work is social and political with themes carrying from room to room. His analogue photos are shown alongside digital works. The destabilisation of the world has arisen as a recurring concern for the artist since 2003, an important year when he felt the world changed with the invasion of Iraq and anti-war demonstrations. In 2017, at a moment when the subject of truth and fake news is at the heart of political discourse, Tillmans presents a new configuration of his tabletop installation truth study center 2005-ongoing. This ongoing project uses an assembly of printed matter from pamphlets to newspaper cuttings to his own works on paper to highlight Tillmans’s continued interest in word events and how they are communicated in the media.Tillmans feels that the art community that exists is a strong force to be reconded with and art as a great traditional communicator is a strong and valid voice. 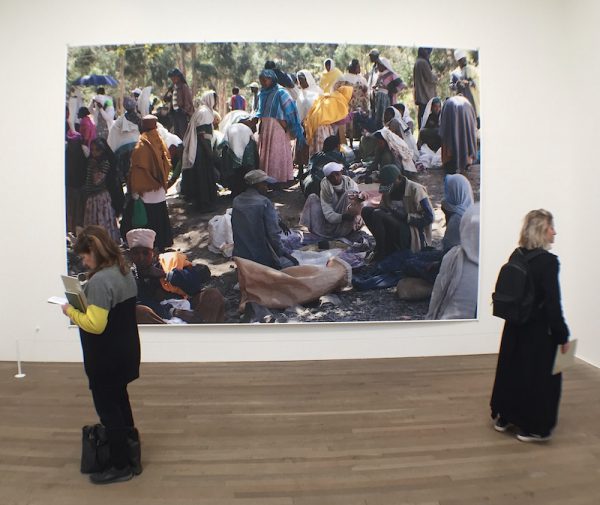 As with the older generation of German artists, Gerhard Richter comes to mind, Wolfgang Tillmans secures a deeper engagement with abstraction, beginning with the important work Sendeschluss / End of Broadcast I 2014. Based on images the artist took of an analogue TV losing signal, this work combines two opposing technologies – the digital and the analogue. Other works such as the series Blushes 2000-ongoing, made without a camera by manipulating the effects of light directly on photographic paper, show how the artist’s work with abstraction continues to push the boundaries and definitions of the photographic form.

The exhibition includes portraiture, landscape and still lives. A nightclub scene might record the joy of a safe social space for people to be themselves, while large-scale images of the sea such as La Palma 2014 or The State We’re In, A 2015 document places where borders intersect and margins are ever shifting. At the same time, intimate portraits like Collum 2011 focus on the delicacy, fragility and beauty of the human body. In 2009, Tillmans began using digital photography and was struck by the expanded opportunities the technology offered him. He began to travel more extensively to capture images of the commonplace and the extraordinary, photographing people and places across the world for the series Neue Welt 2009 – 2012. 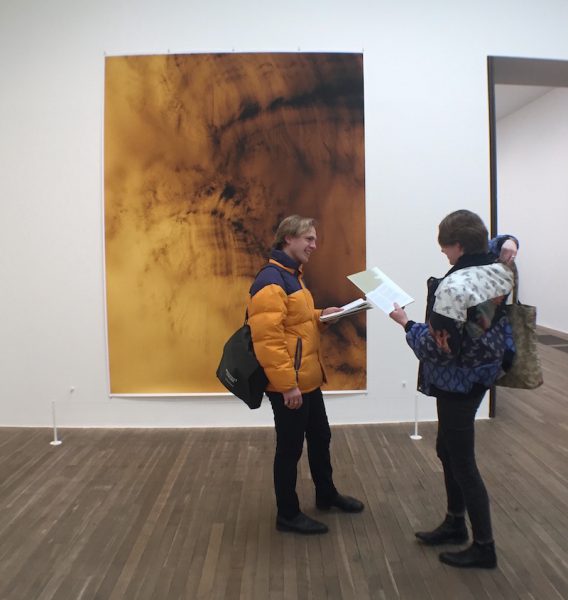 The importance of Tillmans’s interdisciplinary practice is showcased throughout the exhibition. His Playback Room project, first shown at his Berlin exhibition space Between Bridges, provides a space within the museum for visitors to experience popular music by Colourbox at the best possible quality. The video installation Instrument 2015 shows Tillmans dancing to a soundtrack made by manipulating the sound of his own footsteps, while in the Tanks Studio his slide projection Book for Architects 2014 is being shown for the first time in the UK. Featuring thirty-seven countries and five continents, it reveals the tension between architectural form and function. In March, Tillmans will also take over Tate Modern’s south Tank for ten days with a specially-commissioned installation featuring live music events.

I came away from this exhibition with a profound feeling of optimism, like the green shoots photographed in one of his analogue works. Tillmans is constantly evolving ahead of the political mainstream and with its current shift to the right, hopefully, by getting the message out there through exposure we will secure a more stable world, where art and free expression thrives. 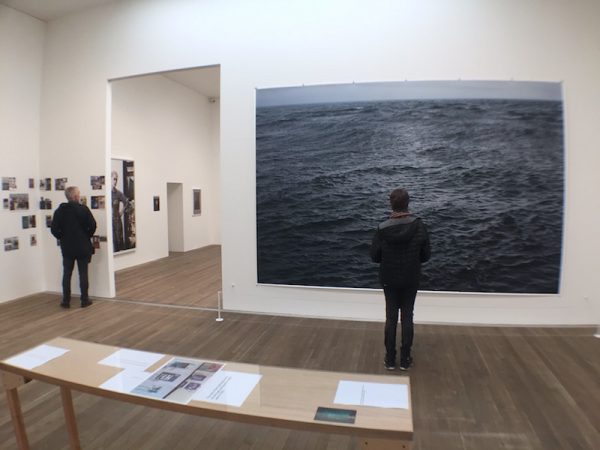 Born in 1968 in Remscheid, Germany, Wolfgang Tillmans studied at Bournemouth and Poole College of Art and Design. In 2000, Tillmans was the first photographer and first non-British artist to receive the Turner Prize. Exhibitions of his work have been shown around the world and his work is held in major international museum collections including the Art Institute of Chicago; Centre Georges Pompidou, Paris; The Metropolitan Museum of Art, New York; The National Museum of Art, Osaka; Stedelijk Museum, Amsterdam, and Tate, London. Tillmans lives and works in Berlin and London.