Like other photographers who work for news agencies, Yannis Behrakis’ pictures were known through the news, but his name was not familiar to the public. He responded to what he saw through the art of picture-making, but he has not been celebrated as an artist within the fine art community. The news gatherers of the world are mourning his loss for his eye, his ethic and his cheerful co-operative personality, but it is highly unlikely that there will be much coverage in the art press.

We all make assumptions about other people, but as I get older, I believe increasingly that life is more accident than design – JCM

To look through Behrakis’s work for Reuters is to witness various narrative tableaux, snapped with opportunism but which have the power of staged compositions, gesture and set. Skies are aflame with war, soldiers brandish terrifying weaponry, a man holds out his hands in submission lying in fear on the floor. In some shots, the eyes of the subject are fixed on the photographer furiously as if regarding the camera holder as the most alien element of an intense, bizarre scene. Perhaps thinking, why are you here? Who knows what goes through the mind at moments of fear! And Behrakis went to places that no one would choose to, not if that person was thinking foremost of safety, of self-preservation. 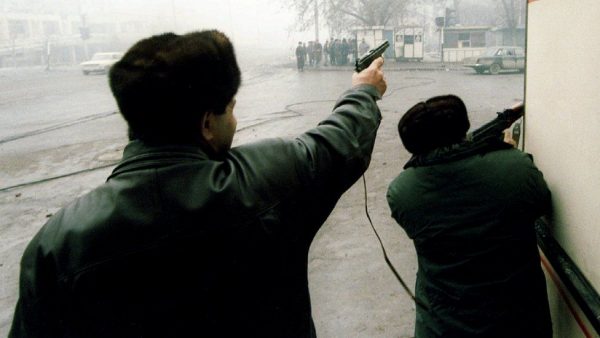 In the Balkan wars, Behrakis took note of the ever-changing conflict and movement of people. Shots of queues of prisoners through barbed wire. His mechanical eye moved on. Shots from over the shoulders of Chechen rebels with pistols, from the shelter of a street corner, look at public targets, panicking across the pavement. If you look carefully with the eye of the camera, follow its direction, go where it is leading your eye, you see how the picture is taken, who is helping Behrakis get close up to the action to take these pictures. Because of this, his work is transparent, honest and interpretable. Read it. You can see how he is positioned to take these pictures whether he is accompanying the rebels, documenting a situation under the protection of the soldiers or outside a prisoner of war camp looking in. But this situation does not dominate the direction of his camera. He is not a stooge of his hosts. He uses his own judgement, as an outsider, as a journalist, to influence his photographer’s choices. He decides what he wants to share with the world
Behrakis’s work has made the world see situations with intensity. And because sometimes the reporter must become the subject of his own work he took a self-portrait of himself in Sierra Leone after surviving an ambush. Two other journalists had died.

His coverage of the refugee crisis in the east Meditteranean teaming with rickety, overloaded boats that so often do not make it across the waters told the stories that finally changed the conversations. Here in London, even among people who prided themselves on their social awareness, the refugee crisis and the constant deaths were not making an impact on everyday commentaries. Working on the Reuters desk for ITN it was impossible not to be aware of the gulf between international news feeds and what people were talking about. It was like living in two worlds, one at work, the other everywhere else.

It was Behrakis and his friends who had a hand in changing that perception. He received the Pulitzer prize with his team for this work. He brought it to the fore. It seems perverse to call these photos of anguish beautiful. But they were such high-quality, expressive scenes that if we regarded them in a fine art context, we would begin to talk about their aesthetic qualities. And it was these qualities that helped these photos have the impact they needed to stop chatterers in their tracks. Chatterers like I would have been, I’m sure if it was not for the accident of working behind the scenes for Reuters. I did not work for news because of any great vocation. I fell into news partly by accident, and partly as the result of a smaller series of choices that led me inevitably into something to do with actuality media. Working in an archive, I was safely hidden away from danger in a basement in the middle of London, watching videos. Behrakis and his friends were there, out there, braving all kinds of situation, giving hope and showing people on the ground that they cared. I imagine he had more of a calling that led him to that place, but who knows. We all make assumptions about other people, but as I get older, I believe increasingly that life is more accident than design. 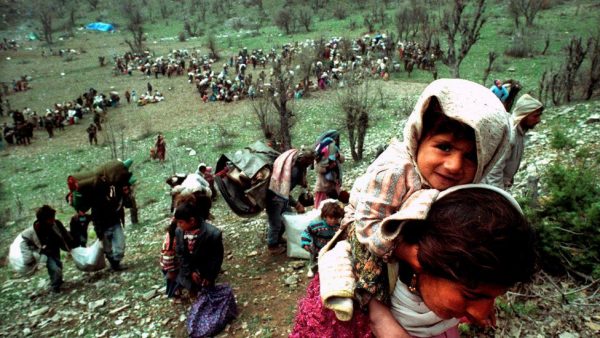 Behrakis and his team won the Pulitzer Prize for the refugee crisis coverage. His eyes in his own self-portrait are forever looking beyond the picture, towards the people who are involved in the events he empathetically records. Today, to see his face, now he is lost through cancer, seems the most touching photograph of all.

I hope that the fine art community will embrace more outstanding photographers from news backgrounds, as they have Don McCullin, into their hallowed halls and museums. Perhaps Yannis Behrakis will be the next to have a major museum exhibition, banners flying, expensive tickets on sale, a cabinet of artefacts of his work, with a video camera a stained T-shirt, a computer with the digital equivalent of dope sheets. I hope this will happen. And more importantly, even, I hope that artists will feel concerned when a photojournalist loses their life working to bring pictures of conflict, and develop a new camaraderie those working to tell stories with images. I would like to see more articles in art journals picking up on outstanding visual work from reporters as it happens.

Behrakis went from cancer, which doesn’t particularly go after risk-takers and those in dangerous jobs. But others are taken far earlier which is why it’s even more urgent to celebrate their work. For those interested, I would recommend the Rory Peck awards as one place to start in anyone looking to increase their awareness of contemporary artistic journalism. Here, freelance journalism is celebrated. Most Reuters journalists are freelancers, stringers, working precariously from job to job. It may feel difficult and distasteful to discuss such important coverage within an artistic context, but for me, it is more dreadful not to give this work the credit it deserves. Because it is dangerous, pressing and difficult does not mean it should be excluded from the respect that we hope impressive, important art should receive. From the 2018 Rory Peck Awards I would recommend looking at Mikel Konate’s videojournalist work ‘Rescue Mission in the Mediterranean Sea’. It is extraordinary, thank goodness, and terribly, terribly sad. Human Husari’s ‘Coverage of the Siege of Ghouta’ is brave, confusing and exposing, including his moving video diary shot on a camera phone in the tunnels of those driven underground during the heavy shelling. Just look at the boy’s smile as he says, ‘we were just sitting waiting, fearing we could be next. But at least we are all still alive.’

Behrakis, I imagine, would have liked that boy and his smile and his cheerful sentiment. One of my friends, the photographer Orhan Tsolak tells me that he heard Behrakis did not want sad music at his funeral. Just optimistic, good feeling songs like, ‘Here Comes the Sun’. Yeah.