Yayoi Kusama, The world-renowned Japanese artist, has designed a balloon for this year’s iconic Macy’s Thanksgiving Day Parade. It will take 40 people to navigate the three-story high inflatable.

Kusama’s balloon titled ‘Love Flies Up to the Sky’ makes its debut in the annual holiday event which more than 3.5 million spectators and more than 50 million viewers nationwide, will see. The Parade’s Blue Sky Gallery series has featured other A-lister artists in the past including Jeff Koons with Rabbit in 2007, Takashi Murakami with KaiKai and KiKi in 2010, and KAWS with Companion in 2012.

The Love Flies Up to the Sky balloon was developed by the artist from face motifs that appear in her My Eternal Soul series of paintings a body of work that she began in 2009. Vibrant and animated, the paintings embody Kusama’s innovative exploration of form and revolve around a tension between abstraction and figuration. The artist’s signature dots — which recur throughout her practice — also feature prominently in the Macy’s Parade balloon design. 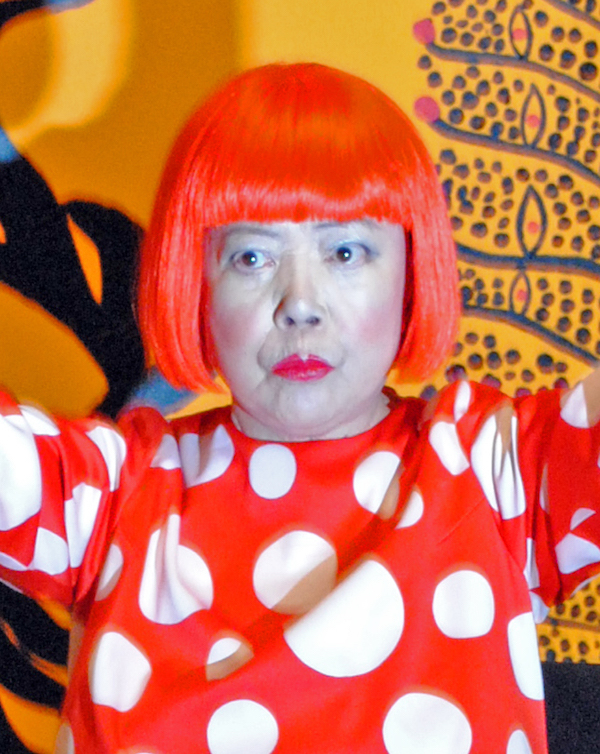 Initially planned as works to be hung in sequence, Kusama’s My Eternal Soul series has become an ongoing project. Several paintings from the series were shown in the United States at the Hirshhorn Museum and Sculpture Garden in Washington, D.C., in 2017. This exhibition subsequently travelled to the Seattle Art Museum, The Broad, the Art Gallery of Ontario, the Cleveland Museum of Art, and the High Museum, Atlanta. Over 40 paintings from the iconic series will be on view at the forthcoming exhibition of the artist’s work at David Zwirner in New York in November 2019.

“In 2005, we began featuring inflatable artworks by the world’s most renowned contemporary artists in the Macy’s Parade lineup with the hope of bringing fine art to the masses and making it more accessible,” said Susan Tercero, executive producer of Macy’s Thanksgiving Day Parade. “This year the world’s most popular living female artist, the iconic Yayoi Kusama, joins the Parade’s acclaimed Blue Sky Gallery series of balloons, making these creations a collection of high-flying art worthy of museums around the world. We can’t wait for millions to enjoy the hypnotic, colourful and whimsical beauty of Love Flies Up to the Sky this Thanksgiving.”

A Kusama creation, the balloon artwork is being transformed from a conceptual drawing into high-flying art by the artists of Macy’s Parade Studio under Kusama’s exacting guidance. Using their expertise in 3D modelling, aerodynamic design and fabrication, the balloon specialists at the Parade Studio have constructed the work of art and painstakingly painted more than 300 of Kusama’s iconic dots on the multidimensional face and radiant biomorphic shapes that make up the unique design.
Coinciding with her upcoming exhibition at New York’s David Zwirner gallery, Kusama’s Love Flies Up to the Sky balloon joins an elite roster of artistic flying wonders previously featured in the Macy’s Parade including works by Tom Otterness (Humpty Dumpty), Jeff Koons (Rabbit), Keith Haring (Figure with Heart), Takashi Murakami (Kaikai & Kiki), Tim Burton (B.), KAWS (Companion) and FriendsWithYou (Little Cloud).

Yayoi Kusama’s exhibition at David Zwirner in New York will be on view from November 9 – December 14, 2019, at the gallery’s 537 West 20th Street location. The exhibition will feature paintings, sculptures, an immersive installation, and a new Infinity Mirror Room. This exhibition is Kusama’s fourth show with the gallery.

The 93rd annual Macy’s Thanksgiving Day Parade kicks off on Thursday, November 28, 2019, and will be broadcast nationally on NBC-TV, from 9 a.m. to 12 p.m. in all time zones.

With more than 50 million viewers across the country and more than 3.5 million spectators lining up along the streets of New York City each year, the Macy’s Thanksgiving Day Parade is a national icon that has grown into a world-famous holiday event. Since 1924, the Macy’s Thanksgiving Day Parade has marked the official start of the holiday season. Growing in size and scale, the Parade proudly marches down a more than 2-mile route in New York City with more than 8,000 participants in tow including Macy’s colleagues, their families, celebrities, athletes, clowns and dance groups, all spreading holiday cheer. Featuring fabulous floats and America’s best marching bands, the signature of the Parade continues to be the world-famous helium balloons.

Contemporary artist Yayoi Kusama was born in Matsumoto, Japan in 1929 and has been creating art for more than eight decades. During her lengthy career, her work has transcended two of the most important art movements of the second half of the twentieth century: pop and minimalism. Today, she is the world’s best-selling female artist and holds the record for the highest price paid at auction for a work by a living female artist. According to a recent review of museum attendance by The Art Newspaper, she is also the world’s most famous artist. From 2012-2018, Yayoi Kusama had over 55 solo shows and exhibitions at more than 45 art institutions worldwide, covering more than 23 countries and breaking longtime attendance records. Over 6 million visitors have attended these exhibitions, many often waiting more than two hours to enter the show and experience Kusama’s transformative work. The North American Tour of Yayoi Kusama: Infinity Mirrors, which travelled from 2017-2019 to six institutions, had over 599,800 visitors.