The buyer of a Banksy’s Balloon Girl stencil that was partially shredded as the hammer came down on it at a Sotheby’s auction last week will go ahead with the £1m purchase, amid claims that its value will have significantly increased following the high profile self-destruction of the artwork. The stunt took place last Friday during London’s Autumn Contemporary Art Evening Sale.

“Banksy didn’t destroy an artwork in the auction, he created one,” said Alex Branczik, Sotheby’s head of contemporary art for Europe.

The artist consigned a stencil spray-painting on canvas of ‘Balloon Girl’ once voted the nation’s most popular painting. As the hammer came down on the lot at £850,000 (£1,000,000 including commission) the frame turned into a paper shredder which remotely destroyed the picture. 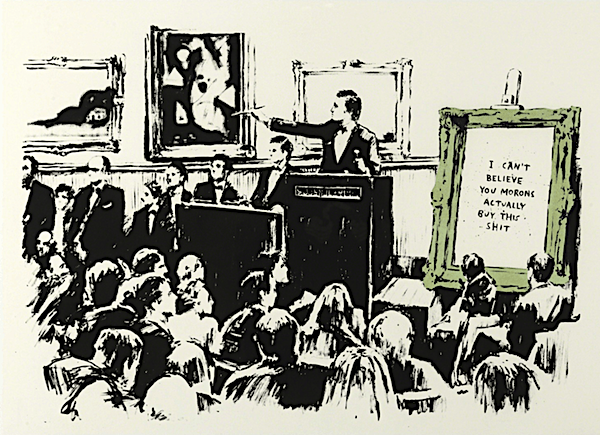 Morons is one of Banksy’s most scathing attacks on the extraordinarily high prices his, and many other artists, artworks generate. This largely monochromatic original screenprint in Banksy’s signature style, portrays an auction room full of people in suits bidding for a number of artworks, including one in a gold frame (the only colour in the image) that reads, ‘I can’t believe you morons actually buy this shit’. This artwork first appeared on Banksy’s site following a record-breaking auction result for one of his canvases.

The work of art which depicts a girl reaching towards a heart-shaped balloon was the final work sold at the auction leading the audience to believe that Sotheby’s were in on the joke.

“Following his surprise intervention on the night, we are pleased to confirm the sale of the artist’s newly-titled ‘Love is in the Bin’, the first artwork in history to have been created live during an auction.”

The buyer was quoted as saying: “When the hammer came down last week and the work was shredded, I was at first shocked, but gradually I began to realise that I would end up with my own piece of art history.”

This is not the first time Sotheby’s has been the subject of Banksy inspired irony. In 2003 Banksy produced a print titled ‘Morons’. It shows a scene of a Sotheby’s Modern art sale and carries the tagline ‘I can’t believe you morons actually buy this shit’.

“It appears we just got Banksy-ed,” said Alex Branczik, Sotheby’s senior director and head of contemporary art in Europe.

Mr Branczik told the Financial Times the auction house was trying to “figure out” what the stunt means.

He said: “We have not experienced this situation in the past …where a painting spontaneously shredded, upon achieving a [near-]record for the artist.

“We are busily figuring out what this means in an auction context.”

But will the piece be worth more now, or is it ruined? Some social media posters have speculated that the prank could have actually caused the artwork to increase in value.

Sotheby’s in a statement on its website described the incident as “unexpected” and said it had become “instant art world history”.